A real-time tool monitoring system for gear hobbing machines has been developed and implemented in manufacturing plants to accurately detect and track tool wear through data collection and without changing process parameters.

Gear-making technology has been advancing at an extremely rapid pace. By many accounts, developments in tooling and machine technology have quadrupled productivity in the last 10 years. But that performance comes at a price, and the sophisticated tools and machines that make it possible are significantly more expensive than those used a decade ago.

That fact presents end users with a dilemma. On one hand, it’s imperative to get the greatest possible number of parts per tool to justify the cost. On the other, it’s equally essential to avoid breakage or other catastrophic damage to those expensive tools.

Manufacturers traditionally have relied on experience-based “rules of thumb” and tool suppliers’ expected tool- life recommendations to take tools out of service before catastrophic failures occur. In fact, it’s not uncommon for machine builders to embed these limits in their control algorithms and force machine shutdowns for tool changes after an arbitrary number of parts are produced.

This approach may reduce catastrophic tool failures — there is no way to know for sure — but it works by building in extremely conservative safety margins that negatively affect productivity. Those safety margins are paid for in excessive machine downtime for premature tool changes, unnecessary tool maintenance costs, and ultimately, parts not made.

The obvious solution to this challenge is a real-time process monitoring system with the ability to track the actual condition of the tool to optimize the number of parts produced for each re-sharpening. In fact, a number of attempts have been made to adapt technologies developed for monitoring other machining processes to gear hobbing, but the complexity of the hobbing process has caused the results to be less than satisfactory.

Consider the challenge: The monitoring system must detect and track tool wear accurately, but that is only the beginning. It also must account for workpiece variability without generating false alerts and yet instantly stop the process if potentially catastrophic chip welding, tooth damage, tooth breakage, coating peeling, or any number of other situations should occur.

In 2013, Artis — a Marposs company — decided to take up the challenge. However, instead of attempting to adapt one of its successful existing systems, Artis engineers chose to take a different approach. Working in cooperation with a major European transmission builder, they started by collecting real-world operating data from production machines in the partner’s plant.

Using this data as a starting point, they developed an algorithm that accurately represented the life cycle of a hobbing tool on those machines in that plant, making specific parts as measured by a known set of mechanical and electrical parameters. That, in turn, supported development of a hobbing-specific analytic software application that could identify the optimum time to take the tool out of production for re-sharpening based on its actual condition.

In theory, that would allow the transmission builder to achieve both maximum output and maximum tool life while minimizing the chance of catastrophic tool failures. To test that theory, the engineers designed a system of machine-mounted sensors to monitor the parameters that provided the most accurate feedback on tool condition — spindle torque, spindle vibration, power consumption, and a number of others that vary with the specific application.

Those parameters are used to create a “signature” for each process and generate a tolerance band around that signature to identify a “good” operation. Monitoring process inputs is not a unique concept, but what makes this application different is coupling those inputs with a software package designed to monitor the signature and simultaneously detect exactly the kind of anomalies produced by worn or damaged tools. (See Figure 1.)

Fault detection is based on the data gathered during the in-plant monitoring project. It turned out that normal wear, welded chips, peeling coatings, and broken teeth all generate distinct signatures before and during the ultimate failure of the tool. With that information in hand, it is relatively easy to identify and quantify each of these signatures and generate either an approaching end-of-life warning for normal wear or an automatic machine stop in case of actual tool damage. (See Figure 2 and Figure 3.)

The sensor/software system also can detect and automatically compensate for changes in tool diameter caused by re-sharpening. Changing the diameter changes power consumption during the hobbing operation, which changes the process signature. Re-calculating the signature automatically eliminates the need to re-master to tool and the associated machine downtime. In a high-volume environment where any given tool may be used on several different machines, the uptime benefits are significant.

Installed on a production machine in the partner’s plant, the system produced a 17-percent increase in tool life without changing any of the process parameters. That represents the difference between tool changes based on rules of thumb or arbitrary part counts and tool changes based on actual tool condition as reported by the monitoring system.

In short, the theory worked. 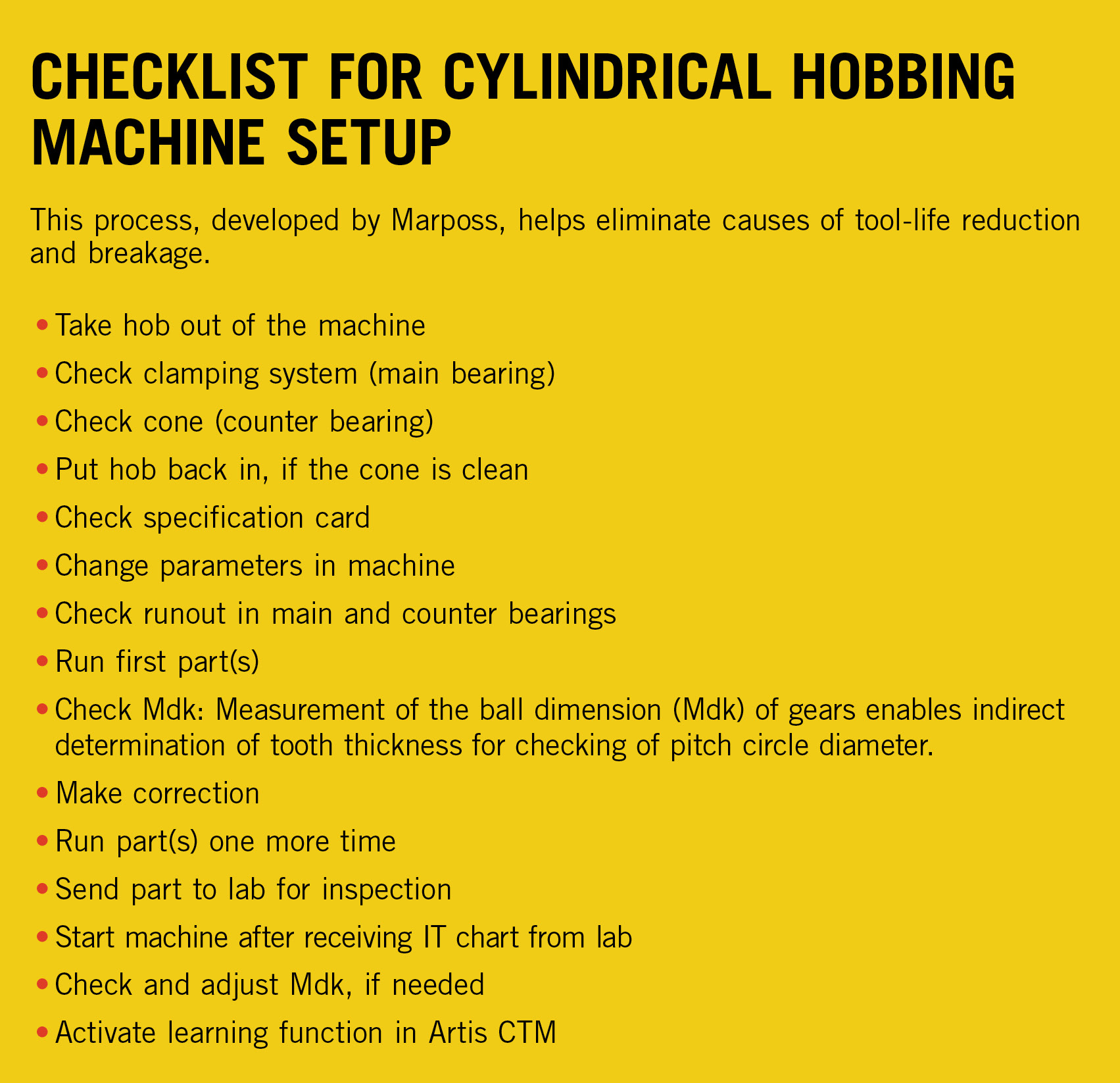 Working with one of the traditional Big Three U.S. domestic automakers, the monitoring system just described has produced impressive tooling cost reductions and productivity improvements. To date, the system has been installed on 98 machines in four major plants in the U.S., Mexico, and Brazil to support a major new transmission program.

In the pilot installation, the system has generated annual tool cost savings of $17,000 per machine, which translates to $1.5 million per year for that plant alone. The plant, which uses 10 different tools, had previously set a standard of 6,000 “hits” per tool before taking it out of service for re-sharpening. With the monitoring system in place, the same tools are now producing an average of 12,000 hits per re-sharpening with no increase in damage or catastrophic failures. (See Figure 5.)

Many of the newer machines in those plants were delivered with embedded pre-set hit count limits in the control software. When the limit is reached, the machine stops automatically regardless of actual tool condition. This feature is now turned off on all machines equipped with the Artis monitoring system because the automaker is confident in its ability to both optimize productivity and protect the tools.

During one of the test sequences, the automaker recorded a sudden drop in tool life on one machine from about 11,000 hits to 3,200 for no apparent reason. Examination showed the tools to be in acceptable condition when removed, but the monitoring system was detecting an abnormal situation. Further investigation revealed that the problem being reported was not tool related at all, but due rather to a deteriorating spindle bearing. That particular fault was not specifically programmed into the software but was nonetheless detected and reported before the tool was damaged. Several other users of the system have reported similar occurrences.

The European transmission builder who partnered with Artis during system development also has U.S. plants using the system. In testing on two different machines, a Liebherr and a Felsomat machine, the system increased productivity from 700 parts per tool to more than 1,000 with no changes to the process. As a result, all 42 machines in the plant will be retrofitted with the monitoring system in 2017.

During the testing in that plant, it was discovered that tools from one supplier experienced coating failures at a higher rate than those from other suppliers. Using data from the test, the customer was able to work with the supplier to remedy the situation and bring the life of those tools up to the expected standard. Had the tools simply been taken out of service after a fixed number of cycles, as was previously done, the coating fault would never have been discovered. Here again, the ability of the system to detect, quantify, and record real-time operational data was a key factor in diagnosing and resolving a situation with a negative impact on productivity that would otherwise have gone unrecognized and unresolved.

Because every machine and process generates a unique signature that has to be captured, implementing the Artis monitoring system requires a period of in-plant technical liaison with the customer. This interaction also generates useful information that can help improve productivity.

For example, in observing machine setup procedures, Artis technicians frequently noted that customers tend to take shortcuts to reduce the amount of downtime involved. The procedures, which vary significantly from builder to builder, are machine specific and extremely detailed. Failure to follow them often resulted in reduced tool life and even damaged tools.

While the procedures are specific, the basic principles they embody can be applied to virtually any hobbing machine. So, to help customers eliminate this cause of predictable tool-life reduction and costly breakage, Marposs developed a 15-step process that covers every aspect of the task — from removing the cutter to replacing it.

A hob is not a $10 drill bit. It’s an expensive, high-precision tool that may cost thousands of dollars. Process monitoring can optimize its productivity on the machine, and a standardized handling procedure can protect it from human error when it isn’t.

Today, gears are cut at a constant 100-percent feed rate from start to finish. Adaptive control to vary the feed rate during the cutting process is the “holy grail” of productivity enhancement.

Many may say it can’t be done for a variety of reasons, but the same thing was said about effective process monitoring not too long ago.

Right now, Artis is working with a major machine builder to develop an adaptive feed rate control system that promises to cut cycle times by up to 12 percent while reducing cutting forces and machine stress. Shorter cycles, longer tool life, and extended machine life are all within reach in the next few years.

A Seal of Approval for Gearboxes

Metallurgical and heat-treat forensics play important part in determining how and...