This paper presents a theoretical analysis of a procedure to determine the Lewis Factor, which can play a major role in the fracture of asymmetric plastic gear teeth.

The basic weakness of plastic spur gear teeth is tooth fracture brought on by the accumulation of stress at the root of the tooth and by the geometry of the tooth. Tooth width and height play a major role in failure, as does the Lewis Factor, which has a direct effect on the expression to calculate tooth strength. This study describes a theoretical analysis of a procedure to determine the Lewis Factor for asymmetric teeth.

The most common failure of well-lubricated metallic gears is caused by pitting at the flank of the tooth. Volumetric fatigue is of secondary importance. However, the most frequent failure in plastic spur gears teeth is tooth fracture, when stress originating at the root of the tooth and tooth geometry play decisive roles [1]. The Lewis Factor is decisive for calculating the bending strength of gears, and most traditional texts in the literature on gears employ graphs and tables to calculate it [2-11]. However, since asymmetric plastic teeth are still somewhat recent inventions, their Lewis factor values are nowhere to be found in the above-cited papers despite them being a sine qua non to calculate bending strength.

This paper analyzes the procedure to calculate the Lewis factor for asymmetric teeth and describes the values of this parameter in terms of the coefficient of asymmetry and teeth number [12-13].

There is a range of procedures for calculating the Lewis Factor (LF) for symmetric gears. According to Black [14], the starting point to calculate this factor is the constant strength parabola in the tooth, as shown in Fig. 1, which establishes that the LF is determined by the expression:

; t and h are obtained from the figure and p is diametral pitch.

It can be deduced from the figure that:

is termed the LF (y) Other standards such as DIN 3990 [16] calculate the most critical section by extending a line at an angle of 30° from the tooth axis of symmetry, tangent to the tooth-root profile in points a-a´.

The author’s calculations of the LF were based on Fig. 4, Fig. 5, and Fig. 6. The stress produced at the root of the tooth due to flexion can be calculated using the following expression: 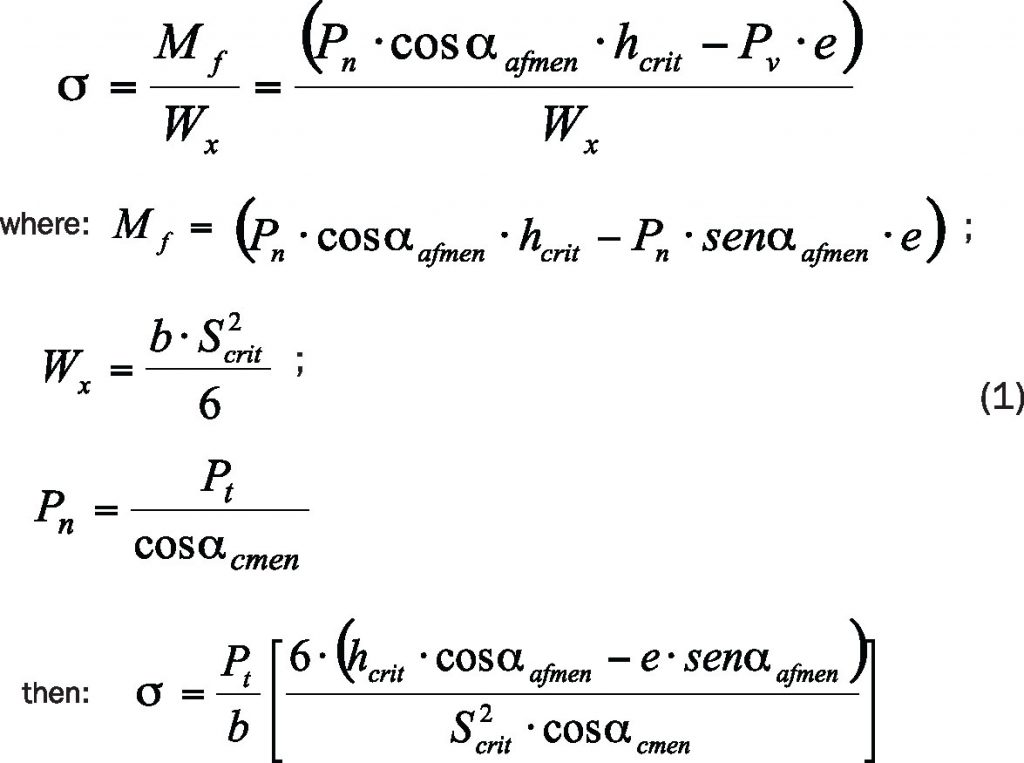 Multiplying and dividing by the module:

then the expression (2) can be rewritten as follows: 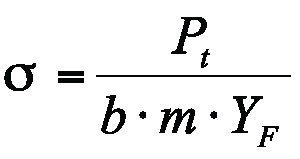 is the LF for asymmetric gear teeth. 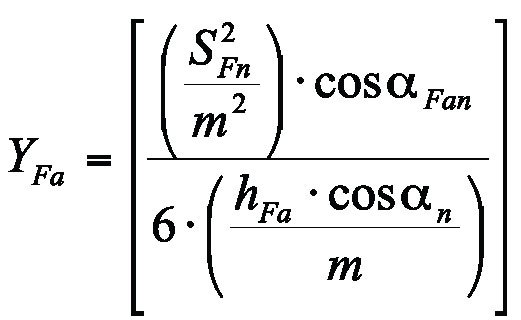 After considering the DIN 3990 standard [16], the algorithm proposed by González [17], and the characteristics of asymmetric teeth, the authors propose the algorithm in Fig. 5 to calculate 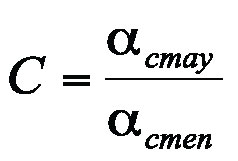 Fig. 4 illustrates how the LF varies for different numbers of teeth and asymmetry coefficients, and its differing values are described in Table 1.

Using Statgraphics software, the authors found the regression equations to obtain the values of the LF for asymmetric teeth depending on the number of teeth and the asymmetry coefficients. Three expressions were established considering the range of number of teeth so that values were precisely calculated:

Table 2 provides a comparison of LF values for asymmetric teeth calculated using the algorithm developed by the author and the regression equations from the Statgraphics software.

New expressions for calculating the Lewis Factor are obtained. The principal failures and the calculation methods are analyzed and compared with the Finite Elements Method [18]. The limitations of present calculation expressions and new coefficients and formulas for the particular case of asymmetric gears are offered. All information was obtained by employing the most advanced methods of graphic design, geometric modeling and simulation. The positive influence of asymmetric profiles combined with tooth profile modification on the bending strength of teeth is demonstrated.