In 2013, the global lubricant market was just over 40 million tons, comprised of 58-percent automotive lubricants and 42-percent industrial lubricants. The industrial lubricant portion of 16.9 million tons was made up of three major segments — namely hydraulic oils, engine oils, and gear oils — which account for just under 50 percent of the market. The remainder includes process oils, metalworking fluids, turbine and circulating oils, grease, refrigerating oils, compressor oils, and transformer oils.

While industrial gear oils have not traditionally been the leading focus for lubricant development, the strong recent growth of wind turbines and field service performance has shifted the focus significantly.

This is coupled with an expectation of longer drain intervals while maintaining and even improving upon machine efficiency. As such, today’s industrial gear oils must have increased bearing protection, a low tendency for micropitting, increased resistance to oxidation, and enhanced low-temperature performance. Synthetic industrial gear oils have been proven to address all of these concerns, and polyalphaolefin (PAO)-based lubricants are predominant within the category.

Wind turbine gear oils are typically at the higher end of the performance spectrum, with in-service reliability being a critical factor in determining relative performance. Typically, wind turbine gear oils place an increased emphasis on bearing protection, have a low tendency for micropitting, provide superior oxidation performance, and must demonstrate excellent low-temperature properties.

A conventional industrial gear oil is formulated to include a performance additive package treated at approximately 2 to 5 percent by weight, with the balance comprising of a blend of conventional mineral base oils.

In a typical industrial gear oil, the performance additive package provides protection from fatigue and wear to the gearbox hardware, in addition to providing thermal stability, rust protection, anti-foaming, demulsibility, and seal protection. The mineral base oil in these formulations provides solubility to the performance additives and contributes to the typically high viscosity of these fluids. While mineral oils have been shown to provide a good fluid film to protect the gears and bearings of the gearbox, in severe applications, the need for enhanced oxidative and thermal stability, as well as relatively poor cold-temperature performance, can lead to reliability concerns.

In typical synthetic industrial gear oils, the mineral base oil is replaced with polyalphaolefins, polyglycols, esters, and Group III base oils. When combined with the correct performance additives, these synthetic base oils improve thermal resistance, can lower operating temperatures to enhance lubricant service lifetimes, and can improve fluid films for greater bearing protection, in addition to providing a greater operating range of temperature. An added benefit of synthetic base oils is that they provide inherently lower volatility loses and a higher flash point.

One of the more critical advantages of synthetic base oils is an improvement in the viscosity/temperature behavior of the fluid. This behavior is characterized as the lubricant’s viscosity index, or VI, and is typically expressed by plotting the log-log of viscosity versus temperature.

While synthetic base oils provide significant advantages over conventional mineral base oils, they have some disadvantages. They are poor solvents, which means that in order to ensure that the performance additives are kept in solution, compatibilizers such as esters or alkylated naphthalenes must be added to the synthetic formulations. In addition, synthetic fluids are significantly more expensive than conventional base oils.

A New Class of Non-conventional Base Fluids

Methacrylates are a recently developed, highly viscous synthetic base fluid. (See Figure 2.) They can be used to formulate a wide variety of lubricants, but due to their high viscosity, they are particularly well-suited to synthetic industrial gear oil applications.

In addition to a high viscosity index, they offer excellent low-temperature performance and are good solvents, eliminating the need for compatibilizing additives in lubricant formulations. Additionally, lubricants formulated with methacrylates have been shown to improve fluid films, providing improved bearing and gear protection. When used in combination with hydro-processed Group III base oils, synthetic industrial gear oils can be readily formulated.

It has been demonstrated that the combination of high-quality Group III base oils with methacrylate base fluids shows many of the advantages of the PAO-based fluids and addresses the potential disadvantages.

While the physical properties of the two fluids are very similar, there are significant differences in their composition. The methacrylate formulation does not use PAO and does not require the use of ester for compatibility with the performance additives.

In order to examine the relative performance of synthetic industrial gear oil fluids formulated with a variety of base oils, a range of performance tests has been completed.

In this section, the primary performance requirements associated with wind turbine gear oils are addressed — as they represent one of the most severe applications.

The following performance attributes are investigated:

The FE8 roller bearing wear test is a widely used bench test that predicts in-service bearing wear and has passing limits set by the bearing manufacturer. In Figure 4, the performance of various ISO viscosity grade 320 lubricants are compared. All lubricants were formulated with the same commercially available performance additive package.

It can be seen that while there is significant variation in performance, both the PAO/ester formulation and the methacrylate formulation exhibit strong performances.

Micropitting is an often-seen phenomenon in hardened steel gears that can result in catastrophic failure of the gears, and subsequently, failure of the gearbox. Failures occur on the flanks of highly loaded gears and consist of very small cracks and pores on the tooth surface. In modern gearboxes, gears are often highly loaded and run under conditions of mixed lubrication, in which the flanks of the gears are not fully separated by the fluid film.

In order to prevent these failures, lubricants must provide and maintain a strong fluid film and utilize performance additives specifically designed to protect the tooth flanks from micropitting. Additionally, good gear design and attention to surface finishing can further reduce the risk.

However, a very effective method of reducing risk of gear failure due to micropitting and extending the life of the fluid and the gearbox is to maintain a good fluid film.

One way of measuring the effectiveness of a fluid in reducing the tendency for micropitting is the micropitting test, run in accordance with FVA 54/7 on the conventional FZG apparatus.

The test is run in two phases: first, for 96 hours in 16-hour cycles with increasing load (the step test), and then for 400 hours in five 80-hour cycles (the high-load endurance test). The entire process is run first at 60°C and then is repeated at 90°C.

In Figure 6, an industrial gear oil ISO VG 320 lubricant formulated with a methacrylate was tested in both the step and the endurance phases of the test with an oil temperature of 60°C. The required passing limits to indicate satisfactory field performance, listed for both phases, are indicated on the chart. The formulation containing methacrylate provided very good micropitting protection to the gears and was classified by the test institute as “highest level of micropitting protection.”

The load-carrying capacity of three fully formulated ISO VG 320 industrial gear oils was compared using the FZG scuffing test. The test differs from the micropitting tests in that it uses different type A gears, which are more sensitive to scuffing. All lubricants were formulated using the same commercially available performance additive package and methacrylate base fluid. (See Figure 8.)

When scuffing occurs, the contacting surfaces of the gears instantaneously weld together for a short time. This welded joint is quickly broken by the high sliding velocity of the contact surfaces. The result of this broken weld is scuffing and scoring to the flanks of the gear tooth. Scuffing is very sudden damage, which can be caused by a single overload, and often leads to total destruction of the tooth flanks. Industrial gear oil lubricants are expected to provide the gears protection from scuffing.

In this standard scuffing test, the pre-load on the gears is increased in stages, and after each stage, the gears are inspected for signs of scuffing or wear. In this particular test, the temperatures of the lubricants were recorded.

All lubricants provided good protection from scuffing, but it is evident that both the PAO and methacrylate formulations experience a significant reduction in temperature at the higher load stages. A reduction in temperature in a lubricant, while protecting heavily loaded gears, will result in reduced internal losses and higher efficiency, while continuing to provide excellent gear protection.

Three ISO 320 VG industrial gear oils were formulated using the same commercially available performance additive package and compared in another variant of the FZG test apparatus. The test was run in accordance with test method PV 1456 at 30°C and 60°C. The test rig is equipped with a torque meter, and it is possible to record the difference between the applied and the transmitted torque across a range of torque values.

As shown in Figure 10, at 60°C at higher loads, the formulations containing methacrylate and PAO both showed a reduction in torque versus the mineral oil formulation.

Synthetic industrial gear oils formulated with the methacrylate base fluid have been tested with respect to their foam behavior, filterability, rust and corrosion protection, seal compatibility, and coating compatibility [6].

In all cases, the performance was superior to that of mineral oil-based industrial gear oils.

In a wide variety of industry-standard testing, a new class of synthetic gear oils utilizing methacrylates and Group III base oils has demonstrated performance advantages comparable to the polyalphaolefin-based synthetic fluids when compared to mineral oil-based gear oils.

In some bench tests, the methacrylate/Group III base oil formulations have demonstrated some performance advantages.

As an alternative to fluids formulated with polyalphaolefins, methacrylate/Group III base oil-formulated industrial gear oils have the potential to offer increased flexibility for the lubricant formulator.

* Printed with permission of the copyright holder, the American Gear Manufacturers Association, 1001 N. Fairfax Street, Suite 500, Alexandria, Virginia 22314. Statements presented in this paper are those of the authors and may not represent the position or opinion of the American Gear Manufacturers Association (AGMA). This paper was presented October 2015 at the AGMA Fall Technical Meeting in Detroit, Michigan. 15FTM22. 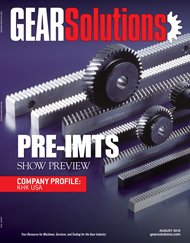