I’ve read that the company was founded in 1959, is that correct?

Yes, by a man named Frank Schwartz. As the story’s been told to me, he owned a company called Schwartz Boring, which landed a contract from NASA to provide guidance systems for the Redstone Missile Program. Well, he was buying the precision ground gears he needed from a company here in Detroit, but they were charging him more than he thought they were worth, so he decided that he was going to do something about it and started making the gears himself. He went out and bought some pretty rudimentary equipment, including a very early version of a Reishauer gear grinder, and he started making his own precision gears for that job. When the project was over they decided to continue searching for gear work, and they ended up spinning the division off into its own company. We’ve been grinding precision gears ever since.

Tell us about the company from a physical standpoint, and which markets you serve.

We’re in the same building that Frank Schwartz bought back in 1959, which was only about 500 square feet then, but it’s been added onto a number of times, so we have 20,000 square feet of total space these days. We completely renovated and modernized the building three years ago, so what we have is essentially a new facility. We generally have about 24 employees on hand, and since our focus is on precision gearing we do a lot of work with the defense industryãthat’s probably our biggest market, in fact. But we also service the oil field and general aviation markets, among many others. During the big aerospace downturn a while back we made a real effort to branch out into other fields that require precision gearing, so we’re pretty well diversified these days. And while most of our customers are here in the United States, we’ve also shipped our gears into France, Sweden, and England.

When did you join the company?

I was hired in 1991 as an engineer, which I’d studied at Michigan Technological University, but I’d worked as a machinist for about six or seven years after I got out of high school and before I decided to go to college. It’s interesting that I left manufacturing only to return to it in a different professional capacity. So I worked here as an engineer for about four years, and then I was named general manager in 1995.

What do you consider the company’s reputation to be, and how is it keeping current?

We’ve been specializing in precision ground gears and splines since our inception, so that’s been the core of our businessãwas then, is nowãand we’re very good at it. In addition to all of this experience we’ve also invested in technology. Within the past year we’ve purchased a brand new M&M Precision Sigma 3 gear analyzer to give us the latest in inspection. We also decided to upgrade our gear cutting capabilities, and our most recent major purchase was a new Mitsubishi ST40 guideless helical CNC gear shaper, which was just delivered last December. We’ve also bought a new Haas CNC four-axis milling machine, so we’re making a point of keeping up with the latest technology to keep ourselves current and productive. So if you add that to nearly 50 years of experience, I think that makes us a pretty powerful player in the gear business. 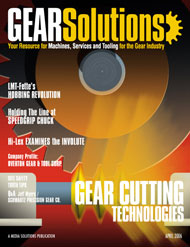