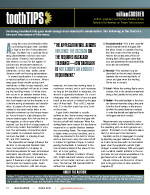 Among the many considerations when considering the gear mesh, backlash is high on the list of misunderstandings. Backlash has a cyclically fluctuating value between minimum and maximum values. If there is zero backlash, then there is no room for the ingress of lubricant and temperature expansion. Backlash is a function of tooth thickness tolerances, run-out, lead, profile, center distance tooth and housing temperatures.

In several applications it is necessary to reduce backlash to a minimum. Almost every gear driven double acting crank mechanism suffers torque reversals, and reducing the backlash will assist in lowering the resulting impact. A similar situation occurs in an elevator traction drive, where either the counterweight or the car plus load weight can be the heavier, or in a vehicle during acceleration and deceleration. In paper roll turret drives, when rotated to top dead center there is considerable movement as the torque reverses. Actual impact is slight because the torque reversal goes from low positive to low negative, so the impact effect is reduced, but the shift of a large paper roll will be noisy unless the backlash is minimal. The automation of industrial plants has created an increased demand for minimum backlash, in indexing drives, NC, and CNC machines.

The application will always influence the decision on the required backlash tolerance. Low backlash is not always an absolute requirement for even servo-based automation requirements. Moderately low backlash (below 30 arc-min) is advantageous if there are a high number of starts and forward and reverse cycles. Gears driving in one direction, with zero torque reversals, will have their working faces in continuous contact, and in such instances as long as the backlash is adequate, the amount is generally irrelevant. On a complete gear train, backlash of any one gear mesh at the output is divided by the gear ratio of that mesh. Thus a 60:1 reducer with 1ƒ in the first mesh has only 1-min at the output.

A gear drive's backlash is usually defined as the circular shake, measured at the gear pitch radius of the final gear with the input shaft held stationary. When the working flanks are in contact it is the distance measured in a specific direction between the non-working flanks. The measurement is taken under a no-load condition, and is totally unconnected to the twist or torque wind-up that occurs when the output shaft is subject to significant torque. In helical gearing the backlash is measured in the normal plane instead of the plane of rotation, as in spur gearing.

2) Normal–This backlash may be described as the shortest distance between the non-working flanks of pinion and gear when the working flanks are in contact.

3) Axial–When the working flanks are in contact, this is the distance measured along a line parallel to the pinion axis.

4) Radial–The radial backlash is the shortest distance measured along a line parallel to the line of centers, or the amount by which the center distance is reduced in order that the left- and right-hand flanks of the gear pair are in contact.

Measurements are converted to corresponding values in the transverse plane at the operating pitch circle for general comparison. If backlash is not otherwise identified it is assumed to be transverse.

Backlash control on bevel gears is usually by adjusting one gear relative to the other, as it also can be done with spur and helical gears when the application permits slight changes in center distance. With worm gears such a method creates problems in the contact area, and can only be acceptable on single thread worms with low lead angles.

We will continue our discussion of backlash in the April issue of Gear Solutions magazine.