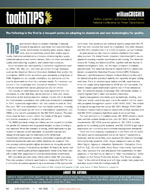 The gear industry faces a constant challenge in keeping abreast of regulations, standards, and customer requirements. Governments around the globe impose regulations, and our customers specify their quality requirements. Customer satisfaction is a function of delivering their quality, combined with price and on-time delivery. There are three elements to quality: manufacturing, suppliers, and commercial processes.

Gear standards are developed by a standards organization such as AGMA, API, BSI, etc., and then accredited through institutes such as the American National Standards Institute that provide the procedures. AGMA is the accredited gear standards writing body of ANSI. Regulations are usually mandatory, but standards are frequently dependent on what the customer needs. For instance, customers in the oil and gas field request an American Petroleum Institute standard that carries precedence over all others.

The majority of world standards now seek agreement with ISO standards, in order that they can be adopted in their own nation. Twenty-five of the leading industrial nations created ISO to facilitate the international coordination and unification of industrial standards in 1947. A previous organization, ISA, had ceased to exist in 1942. The term “ISO” was determined from the Greek word isos, meaning equal. The standards are the work of international committees, and AGMA is the current secretariat for the ISO TC60 division. The standards must be kept current, reflect the needs of the gear industry, and provide assurance of reliability and safety.

The AGMA standards writing committees are now required to consider the parallel ISO standard and its possible adoption in place of writing a new standard. Where the standard is lacking, AGMA standards are put forward for adoption as ISO standards. An excellent example and change of philosophy was the withdrawal of the AGMA Gear Classification and Inspection Handbook, temporarily replaced with ANSI AGMA-ISO documents while new AGMA standards are prepared. This new accuracy system provides tighter tolerances as the quality number is reduced in reverse of the previous standard. Old habits die slowly, and these new A and B quality prefixes replacing the former Q numbers have still to make their appearance in most technical articles written today.

ISO standards are only cross referenced to other ISO standards. They also produce technical specifications, designated ISO/TS, and a normative document representing a consensus of the appropriate committee. Also produced are technical reports designated ISO/TR that may later become the basis for a standard. One other designation ISO/DIS indicates that it is a draft document, not yet finalized.

As gear people we also have to consider standards from many other sources. The Metal Powder Industries Federation (MPIF) issues standards covering material specifications and testing. The American Society for Testing and Materials (STM), together with the Society of Automotive Engineers (SAE), are the major producers of material specifications. The American Society for Quality Control’s automotive division prepared the Statistical Process Control (SPC) Reference Manuals 1 and Measurement System Analysis Reference Manual 2 for standardizing the statistical stability and capability for gear cutting machines. The U.S. services issue federal and MIL specifications which are largely being supplanted by ASTM and ISO standards. The marine industry gears traditionally were to one of three standards: ABS, the American Bureau of Shipping; DNV, Det Norske Veritas; or Lloyd’s Register Part 5- Main and Auxiliary Machinery.

Quality management standards such as Baldridge, Deming, and TQM were widely used in the past, but in the modern era the universally accepted management system is ISO 9000: 2000. This edition is a radical change from the earlier ISO 9001 through 9004:1994. Continued improvement is required and clearly defined. Current certified ISO 9000 companies had three years to be re-certified.

The new standard is in multiple parts. ISO 9000 contains vocabulary and the system fundamentals, and ISO 9001 details the requirements. ISO 9004 provides guidance, ISO 1001 provides guidance for auditing quality systems, and ISO 14000 is gaining in importance as it contains environmental management standards.

There are more exacting counterparts in QS 9000 and AS 9000. The latest quality management tool is Six Sigma™ pioneered by Motorola, and for which they were awarded the Malcolm Baldridge National Quality Award in 1985. Major companies such as ABB, Allied Signal, Algonquin Industries, Bombardier, Caterpillar, Crane, DuPont, G.E., General Cable, Sony, Texas Instruments, Lockheed, etc., have adopted this tool and placed this requirement on their suppliers. It has become an adjunct to “lean manufacturing”, which is based on the Toyota Production System. The Toyota paradigm, “lean,” is the method of doing more with less people, less equipment, and less space while eliminating waste.