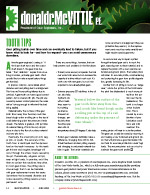 A favorite gear engineer's saying is "if the input shaft turns and the output shaft doesn't, the gear drive has failed." That "definition" implies that something is broken, probably gear teeth. We'd usually like to make a repair before things get that bad.

In previous columns, we've talked about abrasive wear and pitting due to misalignment. This time we'll cover pitting failures due to overload. A gear tooth can have a good contact pattern, but is covered with pits. The pits are caused by excess contact pressure; the material isn't strong enough to withstand the load being applied.

Material below the surface of the gear tooth flows away from the load, much like bread dough under a rolling pin or the top of a rail deforming under the pressure of train wheels. The failure is gradual, with particles of material flaking off into the oil; old pits close in due to the flow of surface material and new pits form.

Eventually, the small pits join into larger pits, or spalls. The accuracy of the tooth form is destroyed and the dynamic load on the teeth increases. As the teeth get thinner and rougher, breakage will occur through the stress risers caused by the pit. Theoretically, all gears will pit, even at light loads. In practice, we'd like them to outlast the machines they drive. In most gear drives, the pitting rate is slow enough that it can be tolerated, with gear replacement every few years. Sometimes the increased vibration and noise caused by pitting require a more permanent cure.

There are some things, however, that can help prevent such problems in the first place:

• Thicker (more viscous) oil spreads the load over more tooth area and can increase the capacity of a drive without much cost. It's worth a try with new gears, but can't be expected to cure already-pitted gears.
• Extreme pressure (EP) additives in the oil can also help. Synthetic oils without additives seem to hurt pitting resistance. Frequent oil changes, particularly when the drive operates with oil temperatures above 160 degrees F, also help.
• Harder gear materials definitely make a difference. Changing from 180 to 321 Brinell hardness doubles pitting capacity and changing to carburized material doubles it again. The harder materials are more sensitive to misalignment (they can pit before they wear in), so the replacement parts must be made carefully and might require special geometry.

An economical way to repair a pitted through-hardened gear set is to recut the gear, exposing new surface material, and to replace the pinion with a new oversize carburized and ground pinion. The harder pinion will retain its accurate profile, work-hardening and protecting the gear from profile degradation, greatly increasing its life.

Another form of pitting is known as "ledge wear," where the portion of the tooth below the pitch line (dedendum) is much more pitted than the portion near the tip (addendum). The tooth is no longer a true involute form. This is caused by a combination of poor lubrication conditions and mild overload. The mating pinion will wear in a similar pattern. The gear can usually be saved by recutting it and making a new hardened and ground pinion that will promote a good lubrication film and hold its accurate profile form under high loads. The accurate pinion acts as a tool to maintain the gear tooth profile.