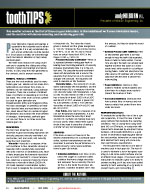 Proper lubrication of gears and bearings is essential to their operation and to achieving long life. It is a very complicated subject, and an entire book could be devoted to it. Since space is limited, we will hit the high points and discuss lubrication of spur, helical, and bevel gears.

The three main reasons for using a lubricant are to separate the sliding and rolling contacts of gears and bearings and reduce friction, to carry away the heat generated by the contacts, and to prevent corrosion.

Mineral versus Synthetic
There are two main methods used to manufacture gear oils. Mineral oils are made from hydrocarbons and refined from crude oil. Synthetic oils are manmade, using chemical processes. There are a number of different types of synthetic oil depending on how they are made. Two of the more common synthetics used for gear lubrication are Polyalphaolefins (PAO) and Polyglycols (PAG). The main advantages of synthetics are their high viscosity index and resistance to oxidation, which allows them to operate at higher temperatures and increase the time between oil changes. Unfortunately, synthetic gear oils can cost three to six times more than mineral gear oils.

Properties
The four main properties of oil that are important to gear and bearing lubrication are viscosity, pressure viscosity coefficient, viscosity index, and pour point, with viscosity being the most important.

Viscosity–Viscosity is a measure of the oil's resistance to flow. Kinematic viscosity is measured with a capillary tube viscometer with units of mm2/s or centistokes (cSt). Most oil data sheets give the kinematic viscosity of the oil at 40ƒC and 100ƒC. At room temperature, water has a viscosity of about 1cSt and honey has a viscosity of about 10,000 cSt. ISO 3448 specifies a classification system that is used to designate the viscosity grades of industrial oils. The viscosity of each grade is defined and the grade designation is "ISO VG" followed by the nominal viscosity at 40ƒC, so an ISO VG 320 oil would have an actual viscosity at 40ƒC in the range of 320 +/- 10% cSt.

Pressure-Viscosity Coefficient–When oil is squeezed between mating gear teeth or bearing races and rolling elements, its viscosity increases dramatically while it is in the contact zone. The pressure-viscosity coefficient varies with temperature and is used in the equations that show how an oil's viscosity changes with pressure. The equations are used to calculate oil film thickness.

Pour Point–Pour point is a measure of an oil's low temperature characteristic. It is the temperature where the viscosity is about 22,000 cSt. Synthetic oils typically have very low pour points, which makes them a good choice if you need to pump the oil during a cold start at very low temperatures.

Additives
If the base oil does not have all of the desired characteristics for a particular application, lubricant manufacturers can add chemicals to increase the performance of a specific property. Some typical additives found in gear oils include:

• Oxidation Inhibitors: Over time oil combines with oxygen in a process called oxidation that forms sludge and acids and increases the oil viscosity. The hotter the oil, the faster the process progresses. Oxidation inhibitors don't stop the process, but they do delay the onset of oxidation.

• Extreme Pressure (EP) Additives: If the oil film between gear teeth is not thick enough to keep the teeth fully separated, there is metal to metal contact. If conditions are right, the teeth can actually weld together and then tear apart on a microscopic level, which results in a scuffing or scoring failure. Sulfur and phosphorus are often used as EP additives and will chemically react with the steel to prevent this micro-welding.

• Foam Inhibitors: Silicone is often added to weaken surface bubbles and allow them to collapse more easily to prevent the build-up of foam.

• Corrosion Inhibitors: Chemicals that form surface films on ferrous and non-ferrous metals that protect them from water and acids.

Performance Tests
To evaluate the suitability of an oil for a specific application, it's best to have it tested using methods that duplicate the operating conditions. This is usually done using standard ISO or ASTM tests, in conjunction with special tests developed by equipment manufacturers. ANSI/AGMA 9005-E02 is a good source of information regarding gear lubrication and provides information on many standard lubricant tests along with some minimum performance specifications.

The FZG gear test machine is one type of machine used to test gear oils. The test oil is used to lubricate a set of test gears operating on a 91.5mm center distance and run at different load stages. It has been used for many years to evaluate a gear oil's ability to prevent scuffing, but it has also been added recently to tests evaluating an oil's ability to prevent macro- and micro-pitting.

Part 2: Don’t compromise a quality gearbox by scrimping on seals...