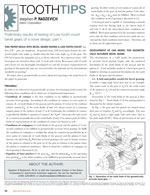 Precision, that is, geometrically accurate (ideal) bevel gearing is the main focus of the paper in particular.

In order to be referred to as geometrically accurate, bevel gearing needs to meet the following three conditions all of which are of fundamental importance:

• Equality of base pitches of the gear, Φb.g, and the pinion,Φb.p, to the operating base pitch,Φb.op, is the third condition to be fulfilled in geometrically accurate bevel gearing.  In other words, at every point of contact,K, of tooth flanks of the gear, G, and the pinion,P, the identity  Φb.p  Φb.p  Φb.op must be fulfilled.  More in detail this condition in bevel gearing is discussed in [1].

A bevel gear pair is capable of transmitting a smooth rotation from the driving shaft to the driven shaft if and only if all of the above-listed three conditions are fulfilled.  Bevel gears produced in the nowadays industry meet only the first condition and do not satisfy the second and the third conditions listed above.  Therefore, all of them are the approximate gears.

In Fig. 1, the gear and the pinion are rotated about their axes of rotation, Og and Op, accordingly.  The axes  Og and Op form a right angle with each other (that is, the shaft angle Σ=90°).  Point of intersection of the axes  Og and Op  is the common apex, Apa, of the gear pair.

The rotation of the gear, ωg, and the pinion, ωp, are synchronized with one another.

The plane of action forms the transverse pressure angle, φt.w, with the plane through the common apex  Apa and that is perpendicular to the axial plane, that is, the plane through the axes Og and Op .  The pitch line,Pln, in a bevel gear pair is the line of intersection of the axial plane by the plane of action. The pitch line makes the gear pitch cone angle, ϒ, with the axis of rotation of the gear, Og. With the axis of rotation of the pinion, Op , the pitch line makes the pinion pitch cone angle,ϒ.

An elementary analysis of Figure 1 reveals that bevel gears of the proposed design are insensitive to the shaft angle alterations.

* As known, formulae and equations those derived for  bevel gears are also valid for gears with a large tooth count and not vice versa.
This equation was proposed by Prof. Shishkov as early as in 1948 (or even earlier) in his paper: Shishkov, V.A., “Elements of Kinematics of Generating and Conjugating in Gearing”, in: Theory and Calculation of Gears, Vol. 6, Leningrad: LONITOMASH, 1948.  In detail, this equation is also discussed in the monograph: Shishkov, V.A., Generation of Surfaces in Continuously Indexing Methods of Surface Machining, Moscow, Mashgiz, 1951, 152 pages.

Cycloidal teeth must not only be accurately spaced and shaped; their...