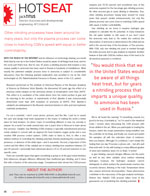 With the reach of the Internet and its influence on technology sharing, you would think that by now we in the United States would be aware of all things heat treat, and for the most part that’s true. But for over 30 years a nitriding process that imparts a very unique quality to ammonia has been used in Russia in hundreds of installations. What exactly the patented catalytic process does to ammonia is subject to considerable discussion, thus the following (partial) explanation was provided to me by the chief technologist at JSC Nakal-Industrial Furnaces in Russia, owner of the U.S. patent:

Research performed at The Institute of Chemical Physics of the Russian Academy of Science by Professor Victor Barelko: He discovered 30 years ago the effect of a precious metal catalyst on the ammonia stream at temperature more than 300°C. This affect is in oscillation of the metal atoms from the metal surface to gas and its returning to the surface. In experiments of Prof. Barelko it was instrumentally determined more than 20% ionization of ammonia at 500°C. Prof. Barelko’s catalysts are widespread in the Russian chemical industry in nitric acid and explosive materials productions.

I’m not a scientist. I don’t count atoms, protons, and the like. I just try to assist the user and design heat treat equipment in the hopes of making the world a better place for heat treaters. So when I learn of something different or new, my curiosity is piqued. As a result I‘ve made several trips over a year’s time to Moscow to learn about this process. Catalytic Gas Nitriding (CGN) employs a specially manufactured precious metal catalyst in concert with an atypical (for heat treaters) oxygen probe and a very creative HMI process control system. CGN’s claim to fame is, first, to offer a very distinct method of controlling the nitriding potential, thereby predicting the composition, presence, or absence of the white layer—and it succeeds. Second, a byproduct of this control and the effect of the catalyst are to reduce nitriding time anywhere between 10 and 40 percent. I personally have witnessed about a 25 to 30 percent reduction in one specific case.

There are scientific types that agree something is going on at the gas/metal interface that influences nitrogen diffusion differently than traditional gas nitriding, and it does this with a fraction of the ammonia usage. Comparisons have shown the CGN process requires just 25-30 percent and sometimes less of the ammonia required for the two-stage gas nitriding process. No other process gas is used, diluting or otherwise. True, other nitriding processes having been around for many years that purport similar enhancements, but only the plasma process can come close to matching CGN’s speed with equal or better controllability.

Gas nitriding as we know it requires hydrogen gas analysis to calculate the Kn potential. In many instances the old water bubbler is still used—if you don’t mind the ammonia odor, that is. No matter the method, the dissociation of ammonia is determined in the initial and as well in the second step of the two-phase, or Floe process. With CGN, only one nitriding set point is needed through the entire process and no gas analysis is required. Another feature is that with CGN the surface area of the load is for all practical purposes a nonfactor.

We’ve all heard the warning “if something sounds too good to be true, it probably is,” so I’m used to the skeptical looks I receive when discussing the CGN process with those skilled in the art. When you participate in loading the furnace, watch the recipe parameters being installed, see the controller do its thing, and finally cut, mount and polish the samples, all with the unbroken chain of evidence; then you believe. Although I’m a believer, I can’t shake the feeling that one day I’ll receive a phone call… but all’s well that ends well. So far, with testing so many different grades of steel and stainless steel, it’s no fluke. It works!

In gas nitriding, nascent nitrogen diffuses into the parts as well as any other catalytic (iron) surface releasing hydrogen, however, the hydrogen analyzer cannot distinguish on which surface the predominate reaction has occurred, furnace, fixturing or the load. Temperature alone also causes ammonia decomposition. These phenomena contribute to the inaccuracy of the gas analysis technique. Bottom line: Nakal’s CGN process takes most of the guesswork out of predicting the nitriding potential.