According to Klüber Lubrication, OEMs who choose the right gear oil will realize lower wear rates and operating temperatures, and greater energy efficiency.

Many factors come into play when selecting gear oils, including the projected life of a gearbox, its seals, and the desired performance of the gearbox within an application. Typically, end users rely on their OEMs to determine the best gear oil, so it is important for OEMs to value gear oil as a machine element much in the same way that they value hardness of the gears, bearing selection, materials, and geometry.

Like all of these other physical components of a gearbox, the right gear oil will allow the gearbox to achieve optimum performance. As a result, end users will enjoy the benefits of lower wear rates, lower operating temperatures and, best of all, greater energy efficiency.

Whether a gearbox is designed for use in a food manufacturing environment or in an industrial machine, the lubricant selected for use in the gearbox must be chosen for optimum performance under a specific set of operating conditions.

Most OEMs find that, for ease of distribution, it is beneficial to use an H1 product because H1 synthetic gear oils are high-performance gear oils with the added benefit of being food-grade. Thus, they can be employed in both food and industrial environments. It is important to note that standards for food-grade gear oils are just as high as for other gear oils, and the synthetics perform better than standard mineral oils.

With regard to energy efficiency, some gear oils are more energy efficient than others due to their lower coefficient of friction. Polyglycols, for example, absolutely shine as the most efficient and lowest wear type of oils, particularly in high-sliding applications such as worm and hypoid gears. In these applications, PAGs offer a lower coefficient of friction within the gearbox, resulting in less power loss. 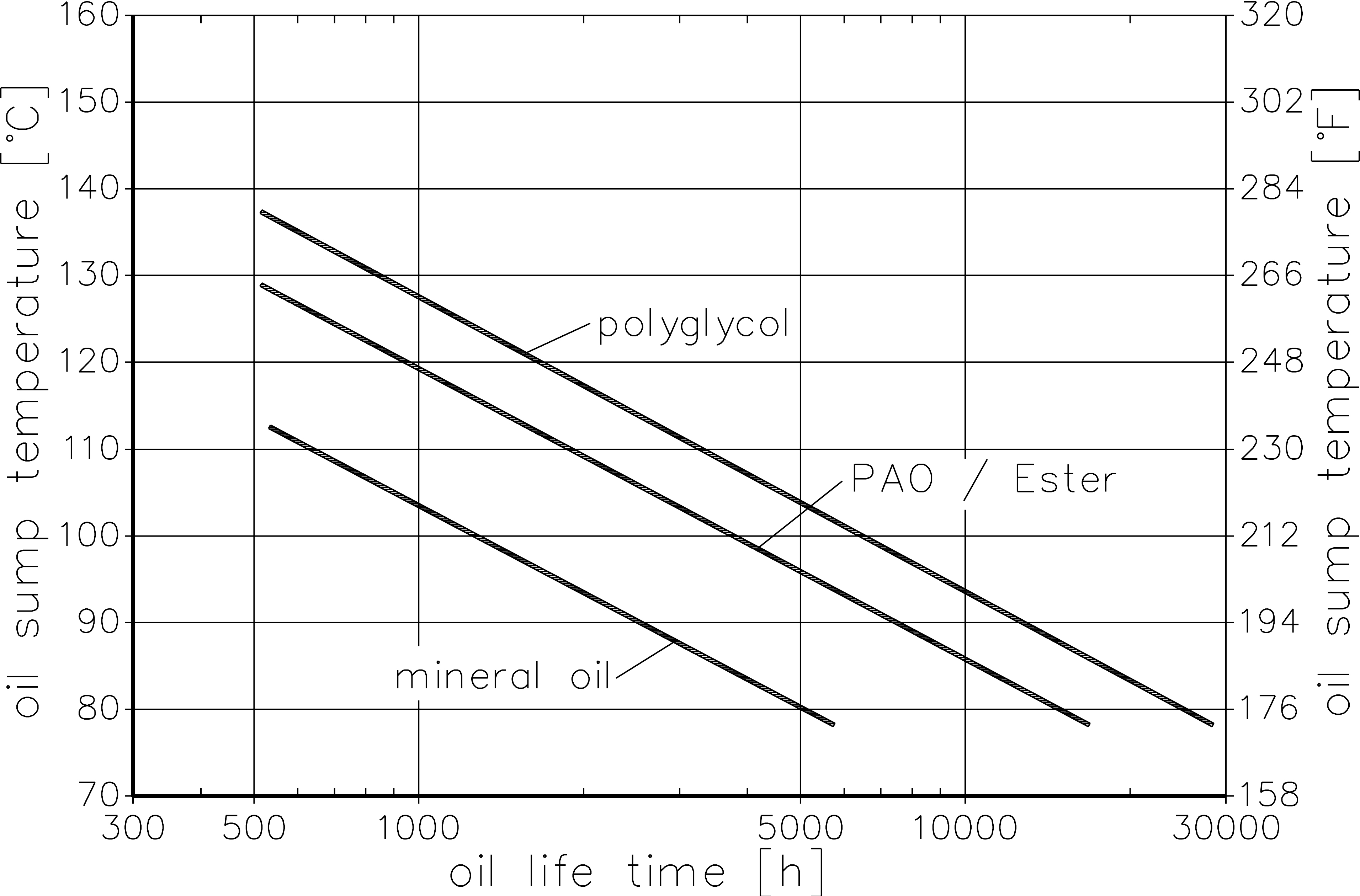 Synthetic oils are more energy efficient because they have better oxidation and thermal stability, which means the gear oil lasts much longer. One could expect to change a mineral oil every 5,000 hours, whereas PAOs or synthetic hydrocarbon oils can last approximately 15,000 hours before a change-out. In addition, PAGs can last as long as 25,000 hours at the same temperature.

As you can see, how often a manufacturer is required to change gear oil depends on the chemistry of the lubricant being used. The slope of the lines in the accompanying graph represents what is known as the “10K rule.” The 10K rule dictates that, for every 10 degrees you increase the temperature of the lubricant, you halve its performance life.

Also, remember that oxidation causes degradation of oil over time. The Total Acid Number changes, and the additives are being used up. While changing the gear oil replenishes these additives and removes wear materials, it also adds maintenance downtime to the equation. Choosing a high-performance gear oil from the start will automatically reduce the amount of oxidation within the oil and decrease the required number of oil changes and downtime for equipment maintenance.

For OEMs, gear oil affects several design considerations, including the reliability of their final product. How much a manufacturer will increase the energy efficiency of a gearbox by using high-quality gear oil depends on the gear type.

The biggest increase can be realized in gear types that are challenged in normally lower efficiencies, such as worm drives. At Klüber Lubrication, our worm gear test rig runs at approximately 60 percent efficiency with a mineral oil. With a PAO, efficiency goes up to 70 percent, and with a PAG it rises to 78 percent. With the efficiency increases, the temperature of the gear box drops. This decrease in temperature increases the life of the gear system. This may not sound like a big deal if you have one or two gearboxes in your plant, but if you have hundreds of gearboxes, then that energy usage really adds up.

In summary, most OEMs and end users find that the extra cost of high-quality gear oil is worth the investment, and that synthetic oils are proven to be the best. By choosing high-quality synthetic gear oil, end users will save energy and reduce operating costs through reduced maintenance, longer oil change intervals, and less wear.