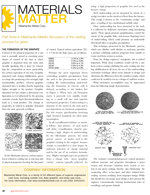 THE FORMATION OF THE GRAPHITE

Control of the physical properties of a cast iron is normally aimed at exercising some degree of control of the time at which graphite is deposited from the melt, and, broadly speaking, this is done by controlling the composition or more particularly, the carbon equivalent of the iron. Graphite deposited early during solidification, grows to a large size producing a low strength, high machinability product, whereas graphite deposited later is smaller, thereby imparting higher strength to the product. Graphite deposited too late adopts a directional configuration as it is influenced by the growing austenite crystals. Such directional influence leads to a weak product. The change in properties, as related to graphite deposited from the melt, proceeds as follows: 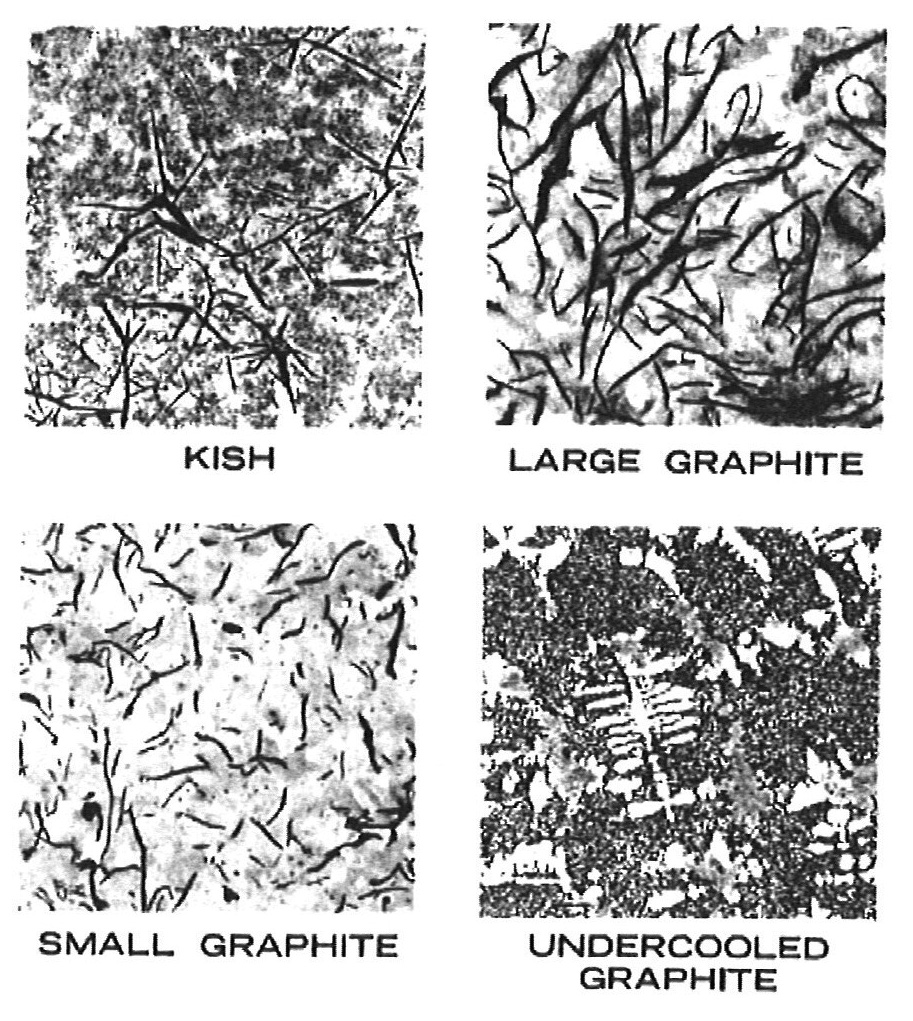 In the Meehanite process, carbon equivalent is related to cooling rate or selection and to physical properties forming the first point of control. Typical carbon equivalents (T.C. + 1/3 Si) for the flake types, are as follows:

Perhaps the most important factor controlling graphite precipitation from the melt is the phenomenon of undercooling. By understanding undercooling, the formation of eutectic cells is delayed, according to the broken line in above figure. When once cell formation starts, it proceeds very rapidly, resulting in a small cell size and superior mechanical properties.

Undercooling is a function of the nuclei in the melt and is not dependent on chemical composition.  For this reason, specifications involving rigid chemical standards are often quite meaningless.

As all crystallization initiates  as nuclei,  it follows  that absence  of such nuclei will delay crystallization, thereby promoting a high  degree of undercooling. In the Meehanite process, the most  potent  source  of nuclei, such as the  graphite existing in the original  furnace charge, is controlled to a close degree by judicious selection of charge material and by the use of an exclusive formulation.  Higher strength types are produced  from a charge with  lower graphitic carbon  content typically achieved  by  using  a high proportion of graphite free steel in the furnace charge.

Such undercooling can be measured by means of a wedge test taken on the metal as it flows from the furnace. This wedge is known as the “constitution wedge” and gives  a reading of the constitutional carbide value.

Once undercooling has been promoted in the melt, it is followed by deliberate nucleation using inoculating agents. These agents promote graphitization, control the nature of the graphite flake, and remove lingering traces of undercooling, which could promote an undesirable  directional effect to graphite precipitation.

This technique, pioneered by the Meehanite  process, which uses alkaline earth silicides as nucleants, provides a product exhibiting uniform properties from outside to centre and from section to section.
·
From the design engineers’ standpoint, this is indeed important. While ideal conditions would call for a uniform section casting exhibiting the same cooling rate during solidification in all areas, the use of the undercooling-nucleation technique allows more latitude in design and eliminates the differences from the outside to inside, which could not be avoided even in a design of uniform section.

What nucleation accomplishes may be appreciated  from the following simple demonstration: 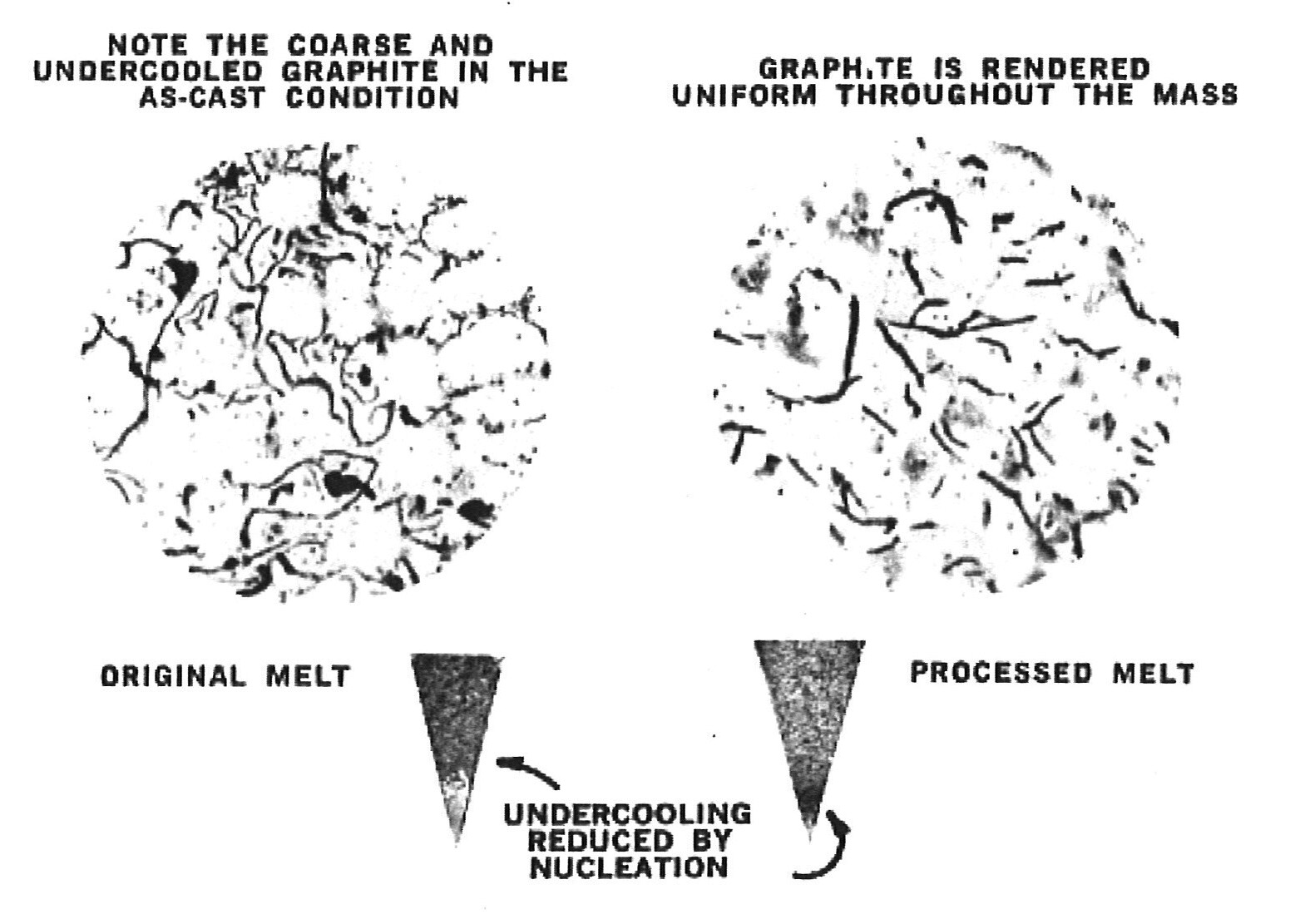 The exclusive constitutional-process control promotes uniform structure and properties throughout a given section and decreases variations from section to section in any given castings, thereby  also eliminating  the weakening  effect  at hot spots  and other  isolated slow-cooling  sections, resulting  from improper design. While this should not encourage poor design it does present the engineer conscientiously obeying fundamental rules of metallurgy and greater latitude.

After solidification, a casting will continue to cool down to room temperature. During this cooling period, it will contract in an amount according to its composition. It will also pass through an important crystallographic change, when austenite  existing at higher temperatures  transforms  into pearlite, which is normally stable at lower temperatures.

A typical cooling curve of Meehanite metal cast iron or steel will show a dimensional change just below 1400°F, therefore: 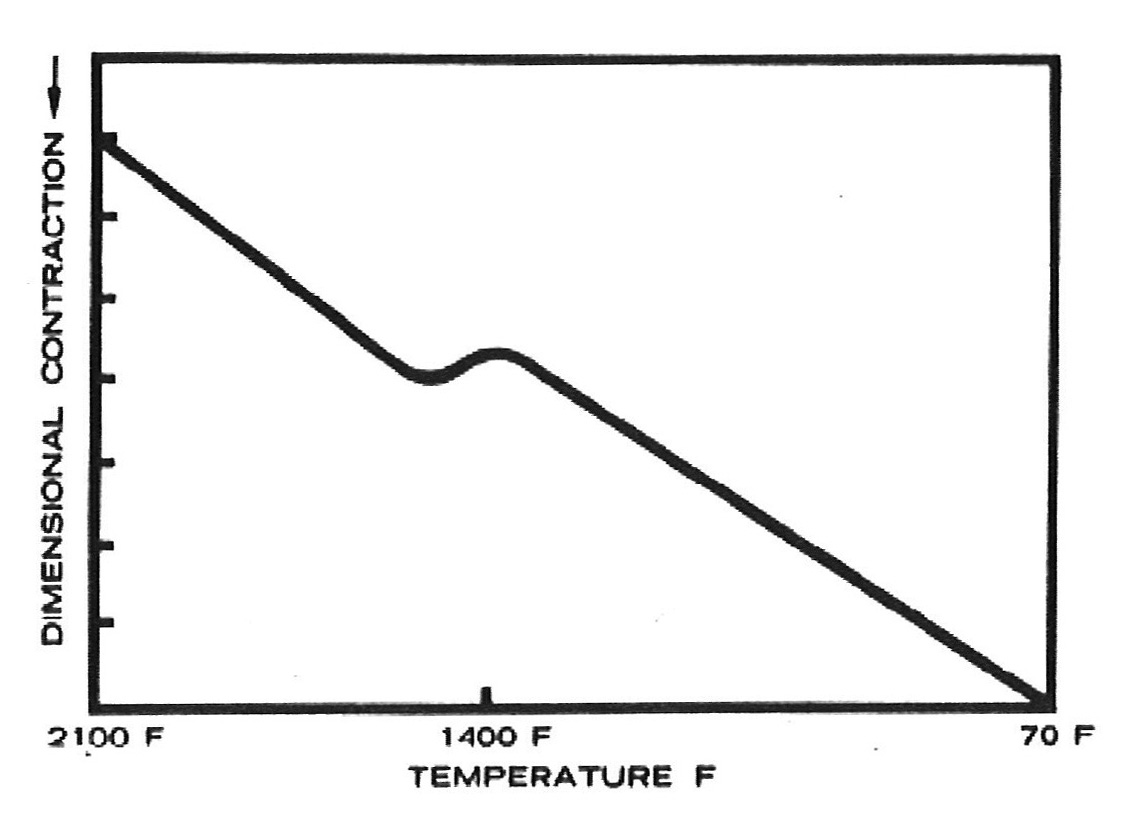 Thus, it is evident that, typically, slow cooling is imperative to allow this change to take place without undue stresses occurring, and those castings of varying dimension or isolated slow-cooling areas present a somewhat special problem.

The dimensional changes occurring during the pearlite interval lead to casting strain, cracking, and warping. Apart from resorting to excessive slow cooling, which can be costly, the foundryman is entirely dependent on the skill of the design engineer. The engineer should seek to provide a design that will cool uniformly and progressively by avoiding abrupt section changes.

As high strength cast irons exhibit the pearlitic change at lower temperatures, where plastic flow cannot occur as readily, and as these cast irons usually contain less graphite, which can act to absorb stresses, it follows that stress free castings are more likely to result in lower strength  cast irons, providing these irons are so processed as to be uniform in structure.  Therefore, over-design, in terms of tensile strength, should be avoided wherever possible.  The Meehanite process, by the attainment of higher strengths  with  relatively  high  proportions  of  graphite  shape  within  a  given  casting section, provides the design engineer with greater latitude.

Where stress is unavoidable, a stress relief heat treatment involving very slow heating and cooling throughout the pearlite interval is often necessary.

In cast irons that are heat treated for hardness or that are alloyed to provide a hard wearing martensitic matrix instead of the usual pearlitic matrix, the contraction stresses are at a maximum and proper design becomes even more important. The Meehanite process provides a series of irons which may be hardened by air quenching and which are less liable to cracking and distortion during the hardening treatment.  For hardness, heat treatment should not be an afterthought on the part of the design engineer it is, essentially to closely follow design rules in the drawing board stage and make due allowance for the metallurgical and dimensional changes that must occur during the hardening treatment.