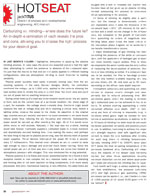 In last month’s column I highlighted difficulties in applying the plasma nitriding process. In many ways the process’s expected outcome had the right idea; attempting to control the presence or absence of the compound layer. It’s just that the means to that end are not easily applied to different loading configurations, whereas atmosphere nitriding is much friendlier to loading variability.

Plasma power supplies have vastly improved, moving away from the arc counting systems of the early German designs. Briefly, the controllers monitored the voltage, up to 1,000 volts, applied to the cathode allowing the load surface area to dictate the amp or current draw. Too much area and you’d run out of power before reaching temperature.

During initial heating of a load any contamination would cause tiny arc sparks to form, and as the current rose at a particular location—the sharp edge of a part, for example—the voltage would naturally drop. Controller Logic would measure the rate of voltage drop and when reaching a critical level, before a lighting strike, crowbar the power to the choke. An algorithm in the original logic counted arcs per second, and when the count exceeded a set value would reduce power thus reducing the arc frequency and intensity. Subsequently, power would be ramped up after resetting the logic. All of this would occur within micro to milliseconds. Naturally, if the load was not pristine, heating would take forever. Eventually suppliers preheated loads to remove moisture and dramatically reduced heating time. Also making life easier, and perhaps the best thing to happen to plasma processing, was the development of pulsed power supplies. These devices interrupted the power 60 times a second, every 17 milliseconds. This interval never allowed an arc or current to raise high enough to cause damage and provided much faster heating. Since the overall power per unit of time was less many loads are convection heated at atmospheric pressure with nitrogen. This also minimized the arcing potential.

Plasma systems due to these and issues presented earlier have found a more receptive market in less complex but very massive loads such as stamping and forming dies or hot work injection molding components, both more easily processed. And since mechanical masking is very effective, threaded holes are plugged with a bolt or threaded rod. Captive heat treaters have all but given up on plasma nitriding, instead outsourcing the process to commercial shops specializing in the process.

All forms of nitriding do slightly alter a part’s size, but the change is dimensionally uniform and repeatable since it adds the thickness of the compound layer <0.001” (25 microns) to the part’s surface and a small volume change in the diffused case, but compared to the growth of martensite from quenching its orders of magnitude less. Nitriding takes place below the lower critical on the iron-carbon phase diagram, so no austenite to martensite transformation occurs.

A major disadvantage of gas nitriding has been controlling the presence of the white or compound layer, until the application of hydrogen gas analysis and more recently oxygen probes. Prior to those developments the water burette was the only method of measuring the decomposition of ammonia, thus more or less nitriding potential. If a compound layer was to be avoided, the Floe or two-stage process was the only method available requiring very long process times — 24, 48, and even up to 90 hours, depending on the diffuse case depth required.

Atmosphere carburizing and quenching are widely utilized to improve steel’s strength and wear, primarily due to reduced processing time. With automotive gears, where the loading is relatively light, carburized case can be achieved in four to six hours. To achieve anything approaching a similar carburized effective case depth, 0.040” (1 mm), using any form of nitriding is impossibly long. In instances where gears might be nitrided for wind turbine or automotive applications, in addition to 60 to 90 hours of nitriding the steel must be previously hardened, quenched, tempered, and possibly ground to size. In addition, hardening to achieve the proper core strength requires steel with significant alloy content to retain the core hardness after nitriding for such long times at nitriding temperatures. Typically, nitriding (950°F to 1,000°F) takes place 50°F below the final tempering temperature of the previously hardened alloy. Carburizing will always enjoy the majority of the deeper case hardening market, but when those applications requiring maximum distortion control and where appropriate gear loads are encountered, nitriding has no equal.

Next month we’ll begin a series explaining where and how endothermic, low pressure carburizing (LPC) and high pressure gas quenching (HPGQ) processes can be applied; i.e., can I harden my load of 3,000 pounds of 10 pound 5130 gears with 20 bar helium?