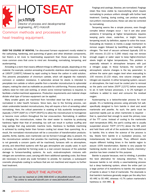 Over the course of months, I’ve discussed furnace equipment mostly related to the carburizing, hardening, and quenching of gears and other drivetrain components, but there’s a lot more to heat-treating equipment than those processes. A few more common ones that come to mind are: Annealing, normalizing, tempering, and austempering.

Annealing is a term that means different things to different people, depending on the material. For example, solution annealing of austenitic stainless steel requires soaking at 1950ºF [1065ºC] followed by rapid cooling to freeze the carbon in solid solution. This prevents precipitation of chromium carbide, which will degrade the material’s corrosion or oxidation resistance. A spherodize anneal for steels is intended to precipitate iron carbide or reform pearlite from a lamellar microstructure to spheroidal shapes, making the steel as malleable as possible for cold-forming. Process annealing softens steel for mild cold working, or where some minimal hardness is required, to facilitate a better-machined appearance. Production requirements and material shape dictate what type of furnace equipment can be applied.

Many smaller gears are machined from hot-rolled steel bar that is annealed or normalized in roller hearth furnaces. Since bars, due to the forming process, can retain undesirable banded microstructures, they will require a form of annealing called normalizing. Here, the critical parameter is soaking at fully austenitic temperatures (typically 1700ºF [926º] to 1750ºF [954ºC]) to allow the microstructure to homogenize or become more uniform throughout the bar cross-section. Normalizing, in addition to changing the microstructure, makes the steel easier to machine by producing hardness higher than that of annealing; too soft can result in surface scuffing and long springs that clog automatic machine tools. Hardness to facilitate machining is achieved by cooling faster than furnace cooling but slower than quenching. As a result, the normalized microstructure will be a concoction of transformation products: pearlite, ferrite, bainite, even martensite can be formed if enough alloy is present. It’s the microstructure variation that provides the machining quality. Since decarburizing is not generally a concern (parts will be machined), furnaces with no atmosphere, air-only, and direct-fired systems with flue gas atmosphere are usually used. In such a process, the potential for forming scale is a real concern because of the potential damage to furnace-handling systems. As such, endo-atmospheric mixtures with nitrogen are sometimes used, carrying with them additional operating costs. But these are necessary to avoid any scale formation to provide, for example, a subsequent cosmetic phosphate coating to surfaces that are not machined and require no further heat treatment.

Forgings and castings, likewise, are normalized. Forgings retain flow lines visible by macro-etching which require normalizing to produce uniform strength with further heat treatment. Casting, during cooling, can produce equally non-uniform microstructures; these can also be corrected by normalizing.

Tempering seems like a simple process, even though complex lattice changes occur – but it can also pose problems if tempering at higher temperatures requires keeping parts clean, oxide-free, or bright. Vacuum tempering would, by definition, appear to solve this issue.  Evacuating air, however, is merely a purge mechanism to remove oxygen followed by backfilling and heating with nitrogen. The level of vacuum achieved (typically 100 to 200 microns [0.133 to 0.266 mbar]) may not remove enough oxygen or water vapor to keep higher-chromium steels bright at higher temperatures. This problem is especially relevant in atmosphere tempers with just a nitrogen purge. In these furnaces, the number of atmospheric volume changes is the key parameter; to achieve the same ppm oxygen level when evacuating to 100 microns [0.133 mbar], nine volume changes with nitrogen are required. In either tempering system, vacuum or atmosphere, the load must be cooled prior to removal so the parts cool below 250ºF [121ºC] before exposure to air. In both furnace processes, 1 to 2% hydrogen or methane is added to react and consume the residual oxygen.

Austempering is a below-the-radar process for most people. It’s a hardening process using primarily hot salt, specifically designed to form bainite in steel and avoid martensite and pearlite. As such, the parts must be quenched rapidly just as when martensite is required  – that is, quenched fast enough to avoid the primary nose of the TTT curve. Instead of cooling to the martensite start temperature (MS), the part’s cooling rate is usually suspended around 700ºF [371ºC] above the MS point and held there until all of the austenite has transformed to bainite; this is where the science of the process is key. Steels form bainite in a nucleation process, not instantaneously like martensite. Thus, different steels require different holding times in the bainite region to assure 100% transformation. Bainite is very popular for hardening ductile iron and an entire foundry chemistry/practice has been created for this purpose.

Bainite is popular because, next to nitriding, it provides the best alternative for reducing distortion. This is because bainite is not strictly a case-hardening process but a deep hardening system, where the entire part (or a large portion of it) transforms to bainite; the expansion of bainite is about ½ that of martensite. The downside is that bainite’s hardness generally ranges per the alloy from 45 HRC to 55 HRC, whereas >0.7% carbon martensite’s hardness is >64 HRC. 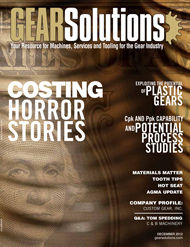 When considering vacuum carburizing, audit post heat-treat processing cost to determine if the costs are worth it