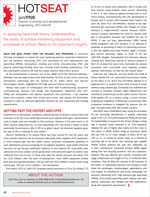 Much has been opined over the decades and presented in numerous formulae and graphs to explain the case hardening process, especially endothermic and low pressure carburizing (LPC) and associated oil and high-pressure gas quenching (HPGQ). Atmospheric nitriding and ferritic nitrocarburizing (FNC) and plasma carburizing/nitriding have also received brain-numbing explanations. This and subsequent columns will help the reader practice what others preach.

Of the presentations in session one at the AGMA 2010 Fall Technical Meeting I attended, only two papers discussed heat treating: The first, by this writer, concerned atmosphere carburizing, and the second—by Dr. Volker Heuer, ALD Vacuum Technologies, GmbH—highlighted LPC/high pressure helium quenching.

Having many years of metallurgical and heat treat troubleshooting, equipment commissioning, process, and design and development experience with LPC/HPGQ and atmosphere and plasma equipment and processes, I will separate theory from practice, reality from smoke and mirrors, and expose the information required to make an informed application decision for your carburizing and nitriding requirements.

Getting Past the History and Hype

Endothermic or atmospheric equilibrium carburizing has for almost a century been and continues to be the case hardening process most applied when gear manufacturers want to impart wear and strength to their products. However, in the past seven to 10 years vacuum carburizing (VC), or more specifically LPC, has found a market in some automobile transmissions. Why, if LPC is so great, haven’t all drivetrain suppliers gone the way of LPC, or nitriding for that matter?

Vacuum carburizing in its various forms has been around for over 60 years, and most recently referred to as low pressure carburizing. Early suppliers of VC equipment, in which propane gas was the carbon source, produced considerable quantities of soot, defining the process and giving VC its negative reputation. Case depth uniformity was poor, as was the gas distribution systems. In one instance 30” long shafts were carburized and slow cooled, turned upside down, and carburized again to achieve case uniformity from end to end. In those early days the partial pressure was about 100 torr (133 millibar). Over the years of development, many OEM’s equipment worked fairly well and operated between 100 and 400 torr (533 millibar) in some cases using natural gas. 760 torr [1013 millibar] = one atmosphere.

From about 1970 to 1990 LPC employed partial pressures of 10 to 20 millibar (7.5 to 15 torr) to reduce soot deposition, and in Europe and Asia evolved using propane, while vacuum carburizing in the U. S. was losing its appeal primarily due to soot horror stories. Simultaneously with LPC development in Europe, and in concert with European steel makers, hot work die steel H-13 (4Cr5MoSiV1) started to be high-pressure gas quenched (HPGQ) with nitrogen at six-bar pressure in single-chamber vacuum furnaces (SCVF). Vacuum furnaces eliminated the need for neutral endo gas in atmosphere furnaces and enabled the use of HPGQ. It was not long, approximately 1995, before HPGQ integration with LPC furnaces in an attempt to duplicate oil quenching in batch IQ carburizing furnaces. In the late eighties and early nineties, again in Europe, gas quench pressures began to climb to 20 bar (290 PSI) nitrogen. Transplanted from Germany, plasma nitriding and carburizing started to become popular in the U.S. at about the same time. Eventually the plasma processes were over-hyped, plus requiring complex operator intervention, so they too lost market share.

Enter the new millennia, and ALD GmbH and ECM of France identify the U.S. automobile transmission market as the place to be. ALD’s first LPC-HPGQ attempt is to duplicate the U.S. pusher furnace inline concept to mixed reviews using propane gas. Eventually they redefined the concept to individual modules called ModulTherm and switched to acetylene gas as the carbon source. France’s ECM applies LPC to a system using a tunnel concept, enabling the integration of HPGQ and oil quenching. Both companies endeavor to integrate the process into the gear manufacturing chain with limited success.

AISI 8620 steel (20NiCrMo2) was, during the European 20 bar quenching development, a popular carburizing grade in the U.S., but unfortunately for HPGQ did not have the hardenability to respond to the 20 bar nitrogen cooling rate in sections easily hardened in oil. This realization initiated the use of higher alloy steels and the move to use helium in HPGQ. Helium being so expensive, about $25 per 100 cu. ft.—bulk nitrogen is about $0.45 per 100 cu. ft.—it cannot be thrown away, so a method of recycling had to be found. One industrial gas supplier offered leased systems but was very expensive, as is their maintenance. Eventually furnace OEMs began selling their own recycling systems—still very expensive, however. They are effective and complex, requiring multi-stage compressors and oxygen to CO2 to molecular sieve scrubbers. They do allow the recovery of 99.5-percent of the helium. In subsequent columns I will compare in more detail the advantages, disadvantages, applications, and cost impact for endothermic and in-situ carburizing, low pressure carburizing (LPC), high pressure gas quenching (HPGQ), oil and liquid quenching (water, polymer, and salt), plasma carburizing, and nitriding and FNC applications, along with equipment requirements. 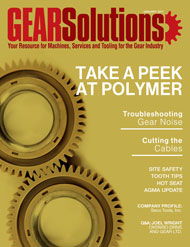