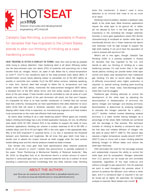 Heat treating is often a conflict in terms: Heat, then cool as fast as possible while trying to reduce distortion. Case hardening steel is all about diffusing carbon into the face-centered cubic iron lattice (FCC) of austenite and quenching into a heat transfer fluid; air, nitrogen, helium, oil, water or salt. Below the A1 critical temperature of 1333°F (723°C) iron transforms back to the body-centered cubic lattice (BCC). If transformation occurs slowly allowing carbon to precipitate out of the BCC lattice as pearlite or cementite (iron carbide, Fe3C) the BCC lattice remains, relatively speaking, in cubic form. Quench steel fast enough to below the A1 temperature and trap carbon within the BCC lattice, martensite the body-centered tetragonal (BCT) lattice, a stressed form of the BCC lattice forms. And that stress causes a deformation or strain of the part shape. If heat transfer could be controlled to cool all areas of a part equally only uniform growth of the part dimension will result, but that won’t happen; it’s impossible for there is no heat transfer mechanism or method that can remove heat that uniformly. Consequently we have specifications that allow distortion to occur within limits that will result in drivetrain operation that’s just… well, good enough. Staying within those limits is expensive, so manufacturing engineers and heat treaters must compromise on the most cost effective heat treat process.

So where does nitriding fit as a case hardening option? Where gears are involved, today’s nitriding technology has a very limited application because, for one, its effective case depth (ECD) 50 HRC (Vickers 513) is too shallow to support the loads of many drivetrain applications. Nitriding can achieve a surface hardness of 60 to 69 HRC in suitable alloys, and 30 to 40 and higher HRC in the core, again in the appropriate alloy. Why is the ECD important? In practical terms, in my view it represents the threshold between pure hardness and toughness. We all know that gear teeth must have a ductile core to absorb the impact induced as teeth engage while the hard surface resists sliding wear and the intense pressure created as loads increase.

Ever wonder why many gear heat treat specifications allow retained austenite levels of 15 percent or more? I believe this phenomenon is partially explained in the paper “Strain Partitioning & Mechanical Stability of Retained Austenite,” May 26, 2010, by Dong-Woo Suh, et al. Sometimes there’s a certain amount of wear-in required in carburized gear trains, and retained austenite acts as a cushion of sorts providing a customized contact morphology that very likely reduces noise. Nitriding lacks this mechanism. It doesn’t need it since distortion is so minimal that noise is not as much of an issue.

Nitriding’s second problem, besides a shallower case depth, is the white layer. Most drivetrain applications require the white layer to be ground off, or better yet not allowed to form in the first place; thus the importance in the controlling the nitrogen potential. Granted, in some gear applications where FNC (ferritic nitrocarburizing) is employed an epsilon white layer is intentionally formed, but in those instances the steel’s core hardness must be high enough to support the high tooth loading. If not you’d have the equivalent of a donut covered with aluminum foil.

What’s old is new again, though. Catalytic Gas Nitriding (CGN) is a process available in Russia for decades that has migrated to the U.S. and stands to alter our thinking of nitriding as a case hardening process. It’s well known that in the right hands plasma nitriding can provide better white layer control and faster case development than traditional gas nitriding. It’s also no secret about the degree of difficulty encountered when higher production is required: i.e. special racking, avoiding parts touching each other, and those nasty hole-discharge-prone holes that must be plugged.

Traditional gas nitriding attempts to control the development of the white layer by adjusting the decomposition or disassociation of ammonia into atomic nitrogen and hydrogen and diluting ammonia. Decomposition is determined by analyzing hydrogen to calculate the nitrogen potential: Np = p(NH3) / p(H2)3/2. Another method involves dissolving residual ammonia in a water burette leaving hydrogen as a percentage of the whole. Both methods are combined with the two-stage or Floe process. This technique consists of nitriding to develop a compound layer in the first step and initiates diffusion of nitrogen into the steel at about 925°F (496°C). The second step requires a higher temperature usually around 1025°F (552°C) plus or minus with a lower nitriding potential allowing nitrogen to diffuse faster and reduce the white layer thickness.

CGN eliminates the need for the two-stage process and substantially improves the ability to control the white layer and its composition. Nitrogen potentials from 3-11 percent can be recipe set and controlled repeatedly regardless of the load make-up and without a thought to part placement. One (N) potential set point is used throughout the process, about 3 percent to produce the diffusion zone without a white layer, and if a compound layer is required it too can be recipe set at higher (N) potentials. No hydrogen analysis is required. More details next month!

From smaller cold-formed steel, gears can be cold pressed into the final shape and size, teeth and all

Thinking of bringing heat-treat process in-house? Benefits exist, but there are many factors to consider first