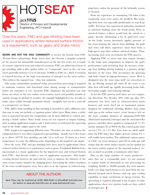 Gears are not the only commodity to receive the benefit from FNC (Ferritic-Nitro carburizing). Brake rotors have also become a popular recipient of the process for automobile manufacturers in the last few years, for a couple of reasons: improved wear and reduced corrosion. FNC, an abbreviated form of gas nitriding, adds a thin epsilon white, or “compound”, layer to the cast iron rotors generally between 15 to 25 microns- (0.0006 to 0.001 in.-) thick. Corrosion is reduced because of the high concentration of nitrogen on the rotor surface. This reduces the exposed iron—thus, less oxidation.

Like many commodities produced today, pre-purchase processing is required to maintain cosmetic and functional value during storage or transportation before the consumer is ever involved. FNC eliminates the potential rust that forms on rotors, as the cars endure cross-country travel and possibly months of outside storage in all kind of weather. An example highlighted to me recently is: brake rotors visible through aluminum wheels—unsightly rust can be a turn-off to a prospective car buyer.

FNC differs from nitriding in that nitriding is intended to add a diffusion zone that may or may not include a ý (gamma prime) white layer. Many times, a white layer is unwanted because the composition can be more difficult to control, producing a brittle surface. Since brake rotors are not exposed to impact loading, their working application requires only a hard surface to withstand the squeezing load of the brake caliper/pad to the rotor.

FNC requires no supporting diffusion zone. Therefore, the time to achieve the compound layer is very short compared to gas nitriding—usually two to five hours at or above 1075°F. Gas nitriding can take 12 to well over 24 hours at a lower temperature to create the diffusion zone, depending on the required case depth.

Over the years, FNC and gas nitriding have been used in applications where reduced surface friction is a requirement, such as gears. Crankshaft Babbitt bearing journals is a classic application for the improved wear and reduced friction from FNC. And therein resides a sort of application oxymoron—disk brakes creating friction between the pad and the rotor to improve the lubricity of the rotor seems counter intuitive for stopping power. Increasing the surface hardness of the rotor would improve wear, but it does so at the expense of reduced stopping force, unless the pressure of the hydraulic system is elevated.

From my experience in commuting 156 miles a day round-trip, rotor wear wasn’t the problem. But warping from heat was especially problematic in stop & go traffic. Everyone has experienced pulsating (unrelated to anti-lock braking) from the break pedal. Prior to anti-lock brakes, a driver would lock the wheels in a panic, thereby eliminating a lot of pad/rotor wear. As the brake system alternately applies pressure to the rotor keeping the wheels from skidding, the pads and rotor will likely experience more heat from a high-speed stop than without anti-lock brakes. Thus, increasing rotor wear necessitates the FNC process.

Applying FNC to rotors may also require changes to the brake pad composition, to improve the pad’s performance with increasing heat. In racecars, reducing heat buildup during braking is a primary design function of the rotor. This necessitates the grooving and holes found in high-performance rotors. Heat is dissipated into the rotor mass itself via convection to the air flowing around the rotor. If the rotor is too thin, heat will build up, rapidly increasing brake fade, increasing weight, and reducing mileage.

As for the FNC process itself there are two competing directions. For decades, 50% endo gas plus 50% ammonia has been used in refractory-lined batch furnaces and retort lined pit or horizontal systems designed for traditional nitriding. Rather than using endo gas as the carbon source, retort furnaces rely on the more complex mixtures of ammonia/CO2/DA (dissociated ammonia)/nitrogen and the associated Kn process controller. Since epsilon is composed of >7.5% atomic nitrogen (N) at 995°F the Kn control point must exceed 7.5%. or >1% Kn. Cast irons are ideal candidates for FNC since their higher percent carbon 2% + will readily form epsilon. The additional carbon source of CO2  (in retort furnaces) and CO in endo gas will ensure that the entire surface matrix can for epsilon [in the lower carbon regions of the material surface] creates as much as possible a continuous white layer.

Due to the large number of rotors produced—since they are a consumable item—it’s not unusual to require loads of thousands in one processing lot weighing 30,000 to 50,000 pounds. For such massive loads very large batch furnaces are used from the traditional integral batch furnace with top (gas) cooling capability to large car-bottom or tip-up systems. No quenching is required although it has its place is some applications, these very massive loads are slow cooled in nitrogen gas.