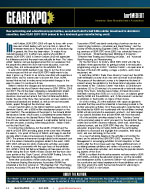 In mid-October, GEAR EXPO 2005 will open its doors with a new face and a fresh feeling. Let’s just say that, in spite of the three-year recession in the gear industry and in manufacturing in general, the Show has been reborn. Or maybe it has matured because of it. In either case, anyone who exhibits or attends GEAR EXPO 2005 in Detroit October 16-19 will appreciate the difference and find the event more valuable for them. The “value-added” features we have designed arose from our awareness that the people who attend the Show want more education, more networking time, and more equipment on the exhibition floor.

In early 2004 AGMA decided it was time to put the Show under a microscope and find out what GEAR EXPO really wants to be when it grows up. Thanks to an astute consultant with expertise in trade shows and his master plan to dissect the Show, AGMA learned that we had to make some fundamental changes in the event to allow it to continue to thrive.

Before I mention the changes and enhancements, however, let me focus briefly on the city of Detroit–the home for GEAR EXPO in 2005 and 2007. The city has been undergoing a redevelopment project unmatched in the city’s history. There is new construction in the downtown area near and around the Cobo Conference/Exhibition Center, the site of the Show. New restaurants and new stadiums for professional baseball and football, as well as new and renovated hotels, appear throughout the downtown area.

A major transformation on the Detroit riverfront awaits visitors to downtown Detroit, with a $500-million development project on the east riverfront. The centerpiece of the project is the General Motors Renaissance Center, which boasts a completely renovated Marriott Hotel and serves as the General Motors World Headquarters. More than 20 new restaurants have opened in metropolitan Detroit in just the past two years, including Sweet Georgia Brown, Seldom Blues, and the Hard Rock Cafe.

It could just be coincidence, but the rebirth of Detroit and the rebirth of GEAR EXPO are taking place at the same time. Whatever the reason, I am proud of the city of Detroit, and happy to see that we were able to make some necessary changes to improve GEAR EXPO. The primary enhancement brought about by the research project is the series of education programs added to the event. GEAR EXPO 2005 will have two kinds of education activities associated with it, running concurrently with the open hours of the exhibition. First, AGMA’s 2005 Fall Technical Meeting will take place at Cobo Center during the Show. AGMA will also conduct the four-hour classroom portion of the “Basic Course” of the AGMA Training School for Gear Manufacturing daily during exhibition hours.

Three other associations will be conducting seminars, as well: The American Bearing Manufacturers Association (ABMA) has scheduled a four-hour seminar on “Why Bearings Fail”; The Forging Industry Association (FIA) and the Forging Defense Manufacturing Consortium (FDMC) are jointly conducting a four-hour seminar on “Gear Forging Solutions–Simulation and Rapid Tooling”; and the Society of Manufacturing Engineers (SME), which has been conducting seminars at GEAR EXPO since 1995, has scheduled three six-hour seminars: “Understanding Gear Metrology & Inspection,” “Effective Heat Treating and Hardening of Gears,” and “Advanced Gear Processing and Manufacturing.”

For the first time in its history, GEAR EXPO 2005 will offer the exhibitors three opportunities for getting involved in the education programming using an on-floor “Solutions Center”–an open area at the rear of the hall with seating, a stage, a podium, audio visual equipment, etc.

In early May, AGMA’s Trade Show Advisory Council and the AGMA staff developed a survey which was sent via e-mail to all exhibitors. The purpose of the electronic survey is to determine the level of interest among the exhibitors in the three distinct education activities related to the “Solutions Center” that follow: 1) Exhibitor presentations (15 to 20 minutes) of a commercial or technical nature during Show hours, including case studies; 2) Panel discussions held each morning from 9:00 a.m. to 10:00 a.m. on subjects generated by AGMA and the exhibitors, and; 3) Mini-seminars conducted by exhibitors in their booths on topics of their choice.

As of this writing, 35 of the exhibitors with space assignments indicated that they would be interested in becoming involved in the on-floor education activities. All of these education opportunities will be scheduled by AGMA and coordinated with the exhibitors involved. AGMA will also promote the equipment, products, and technologies of any specific exhibitors that provide AGMA with the information.

All of the exhibitor activities related to the “Solutions Center” will be promoted widely to visitor prospects by the exhibitors themselves and by AGMA via press releases, direct mail, advertising, editorial content, and the GEAR EXPO Web site. This enhanced education programming will allow AGMA and the participating exhibitors to showcase and highlight the companies, their equipment, and new technology to the world.

As a way of achieving balance in the activities surrounding the event, and to enhance the GEAR EXPO 2005 “experience,” Show Management is encouraging exhibitors to hold receptions in their booths after the Show closes each day. These additional hours of socializing between exhibitors and visitors will serve as a complement to the education activities, also increasing the popular networking aspects of the Show.

AGMA is confident that the enhancements we have made to GEAR EXPO 2005–including the education programs, and the renovation and development activity in downtown Detroit–will combine to make for a productive and valued experience for those exhibitors and visitors from around the world that we look forward to welcoming to GEAR EXPO 2005 in mid-October. 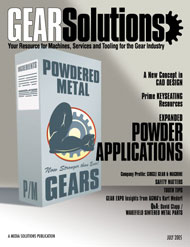