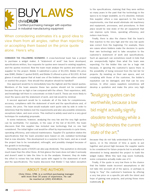 Consider the following scenario: A cross-functional team has a project to purchase a widget maker. A “statement of work” has been developed, specifications written, four requests for quotes were issued to existing suppliers, and the quotes received. Now the team must analyze the quotes and select the supplier for the project. Bidder A submitted a price of $1,000, Bidder B’s price was $980, Bidder C quoted $429, and Bidder D offered a price of $2,000. At first glance it would appear that at least one of the bidders may have either underbid or overbid the project. How should this situation should be handled?

One approach would be to immediately toss the highest and the lowest quotes. Members of the team assume these two quotes should not be considered because they are so high or low compared with the others. Their experience, skill, and knowledge tell them to concentrate on bids A and B. These are more likely to meet the specs and the statement of work, and risk would be minimal.

A second approach would be to evaluate all of the bids for completeness, accuracy, compliance with the statement of work and the specifications and, of course, the price. The team would evaluate each quote side by side in order to determine that the bidders met the requirements and also any possible omissions, exceptions taken, and even errors. This method is widely used and is a very good technique for evaluating proposals.

In some instances, however, analyzing the very low and the very high quotes can be worthwhile. For example, in the case of the bid of $2,000, the team discovers that this supplier has included new technology that no one had considered. The initial higher cost would be offset by improvements in cycle times, operating efficiency, and reduced maintenance. Supplier D’s quotation states the specifications that the team provided were based on old, outdated technology that is now obsolete. This development is a surprise to the team, and as a result the project has to be reevaluated, rethought, and possibly changed because of the growth in technology.

Reviewing the quote of $429 can also pay dividends. This quotation is obviously much lower than the other three. At first glance the team does not take it seriously and doesn’t want to take the time to do the analysis. However, they do make the effort to review this low dollar quote with regard to the statement of work and the specifications. The teams discovers that Bidder C has taken exception to the specifications, claiming that they were written so many years in the past that the technology in the specs is no longer available, so it’s obsolete. Instead, this supplier offers a new approach to the team’s requirements, one that would eliminate old machinery and equipment, processes, and procedures. In their place would be new state of the art equipment that can improve cycle times, operating efficiency, and reduce man-hours.

Finally, there is also the chance that the team’s first reaction to the very high and the very low quote was correct from the beginning. For example, there are cases where bidders make the decision to quote their own technology and to take exception to the customer’s statement of work and specifications. Such an approach can sometimes result in bids that are unexpectedly higher than what the team was expecting. For the bidder this can be a huge risk because, in ignoring the customer’s specs there is the possibility of being removed from the bid list for projects. By insisting on their own specs, and not complying with those of the customer, the bidder’s reputation can be damaged, and that can be very serious. In other cases suppliers sometimes will develop a quotation and make the price very high because they do not fully understand the customer’s specs, or in the interest of time a quote is put together and priced high because the supplier wants to be considered for future projects but is actually not interested in being awarded the project to build the widget maker. While this tack may seem foolhardy, some companies actually make use of it.

Finally, if the quote is very low there is the chance that the bidder made incorrect assumptions or did not take into account all of the specs, or perhaps is trying to “buy” the customer’s business by offering a very low price on a specific job with the intent and hope of gaining new projects, and pricing those more realistically.