With a reputation built on 60 years of success stories, The Gear Works continues to grow with the introduction of its well-equipped new Gearbox Repair and Test Facility.

While it might not seem logical at first glance that a degree in journalism would lead to a career in gear manufacturing, it all begins to make sense once you’ve heard the story. “Ingwald Ramberg was the son of Norwegian immigrants who settled in Seattle around the turn of the last century,” says Roland Ramberg, who is president of The Gear Works, in recalling his father, the company’s founder. “My grandfather leased some land, bought some cattle, and began operating a dairy, so my father grew up delivering milk to the dairy’s customers.”

Once he entered college, though, he fell in love with reading and writing, eventually graduating from the University of Washington with a degree in journalism. Only then did he discover how little money was to be made as a cub reporter for a small-town newspaper, so he ended up taking an entry-level job as a helper at Western Gear Works–then the largest gear manufacturer to be found west of the Mississippi River. And that’s when the value of his college studies finally became apparent.

“He was young, energetic, and one of the few ground-level employees who could actually read, so when he began devouring equipment manuals and making legitimate suggestions his bosses took notice, and he soon became a rising star at Western Gear,” Ramberg says. “And this was during World War II, when the company was going hucklety-buck producing gears for the war effort, so they were on the lookout for intelligent young men who could help them improve their productivity.”

As the war wound down— and after rising through the ranks and making many helpful acquaintances–Ingwald Ramberg and a colleague, Lee Mantel, decided that it was time to go out on their own, so they rented a garage, bought a single gear hobber, and went into business for themselves in 1946. By 1950 the company had grown to the point that additional space was necessary, so the partners bought their first facility. “They found an old machine shop that was for sale,” says Roland Ramberg, “so in one fell swoop they acquired lathes, some mills, and a place to put their gear machines, which really bolstered the company’s growth.”

In 1963 Ramberg’s father bought out his partner and officially incorporated the business as The Gear Works. Then, four years later, he learned that the company’s site sat square in the middle of a new interstate highway that was being built to run from Canada all the way into Mexico. “So he took the proceeds of the sale and leveraged enough capital to build the core of our current facilities just south of downtown Seattle,” says Ramberg. “It’s really the epitome of the American success story, if you think about it, because my father invested everything he had into this company, and he was from a family who had immigrated to this country not that long before.”

Although it was something of a gamble, the move proved to be a crucial point in the company’s evolution. After purchasing a parcel of land along the Duwamish River, Ramberg designed a 30,000 square-foot facility that would allow for expanded production. “Imagine moving from a dank, musty old wooden structure into a huge new building that was clean and well lit,” says Ramberg. “It seemed like the Taj Mahal to them, and they thought they’d never run out of room.” Forty years–and three major expansions–later, The Gear Works now boasts more than 130,000 square feet of manufacturing space on a veritable campus of interconnected buildings. Other things have changed, as well. After graduating from the University of Washington with a degree in management, Roland Ramberg joined the company full-time in 1972. “One great thing about having a family business is that you’ve always got a summer job,” he says, “so I’d worked my way up from sweeping the floors, to working on the debur bench, to changing blanks on the gear machines. But there was never any pressure from my father to join the company. Once I’d graduated from college he’d said ‘Look, if you want to be a sailor, go sail. But if you want to come work with me, I’ve got a job for you.’ And even though I did try my hand at becoming a restauranteur— which I’d always thought would be fun, for some reason–it didn’t take long before I realized that my best opportunity lie in joining the company.”

Since Ingwald Ramberg’s passing in 1982, The Gear Works is now a second-generation family owned business, with Roland and his younger brother Sterling running the operation. “Sterling came through the company the same way that I did, starting on the shop floor and working his way up through all the various positions, and he’s also a graduate of the University of Washington,” says Ramberg. “And while his official title is vice president of sales and marketing, the two of us work together very closely on virtually every aspect of the business.”

One aspect they’ve overseen involves the company’s most-recent period of growth, which led to the development of the Gearbox Repair and Test Facility: a 20,000 square-foot building with a 2,500HP regenerative test bed, including all the necessary monitoring equipment, which the company plans to have operational this year. “We’ve had a 150HP test stand for years, which we call the ‘baby bed,’ but this one is so powerful that we’re calling it the ‘mama bed,'” Ramberg explains, adding that the new bed will be one of the largest and best-equipped of its kind in the country.

Opening this new facility will strengthen the company’s reputation as a premium service and repair source, especially since it already offers 24-hour emergency repair assistance. “About half of our business involves providing gears for OEMs, and the other half is manufacturing gears for end users whose equipment needs to be repaired. So, in addition to being ISO 9000 certified, part of our program will involve being able to employ the same or even better quality procedures in the repair of used gearboxes as the OEMs do in the assembly and testing of new gearboxes,” Ramberg says. “We see our market growth taking place in the area of servicing existing drives, in addition to our ability to design and manufacture custom drives as well.”

One reason for this decision has to do with the growing number of wind turbines sprouting up around the country, and especially along the West Coast. These massive turbines will eventually require maintenance and repairs, and The Gear Works is now poised to provide that service whenever it becomes necessary. “This really isn’t a new direction for us, though,” Ramberg says. “It’s just an expansion of a service that we’ve already been providing to our customers for years.”

From a two-man operation with a single machine in the back of a garage, The Gear Works has grown into a thriving enterprise employing more than 100 people and with a customer base scattered all across the globe. “We are not a low cost, high volume producer, we’re a low volume, high quality manufacturer, and with our new Gearbox Repair and Test Facility, we’re better equipped to service our customer’s needs than ever before,” says Ramberg. “And I believe that my father would be proud of what my brother and I have managed to accomplish. I think we’ve done a pretty good job of taking his original dream and expanding and improving it.” 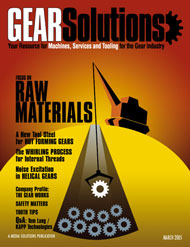