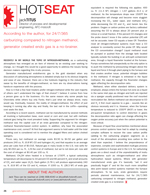 Recently in my world the topic of nitrogen-methanol as a carburizing atmosphere has emerged as an item of interest by an existing user seeking to change, so I thought this would be a good opportunity to address the issues facing decision makers regarding this in-situ process.

Generator manufactured endothermic gas is the gold standard when any discussion of carburizing atmospheres is debated simply due to its obvious longevity and ease of use. However, there are a few holdouts lingering in the industry that swear by the benefits of nitrogen-methanol, so here are my observations having hands-on experience with the process.

How is it that a few heat treaters prefer nitrogen-methanol while the vast majority of others can’t understand the logic of that choice? I believe it comes from how a person grew up in the business. It’s the same reason why some people buy Chevrolets while others buy only Fords; that’s just what we always drove, many would say. Eventually, however, the reality of nitrogen-methanol, the effort of just keeping it running day after day and finally, the last nail in the coffin—operating cost seals the deal.

According to a recent search, methanol can be manufactured by several methods all involving a hydrocarbon base, even wood or corn and coal, but with methane (natural gas) being the most prevalent today. Supporting the argument for nitrogen-methanol was the capital cost of an endo generator compared to the nitrogen-methanol flowmeter-based control system. In addition, why have the associated maintenance cost, correct? At first that argument seems to hold water until the total operating cost is considered not to mention the plugged filters and carbon choked spargers.

Methanol, CH3OH when heated in a furnace at 1700ºF, a typical carburizing temperature will decompose to 33 percent CO and 66 percent H2 and small amounts of CO2 and water vapor (H2O). Each gallon (3.78 L) will produce approximately 240 cu. ft. (6.8 M3) of the CO and H2 mixture. If 1000 cu. ft. (28.3 M3) of endo gas equivalent is required the following mix applies: 400 cu. ft. (11.3 M3) nitrogen + 1.67 gallons (6.3 L) of methanol. As the temperature drops near 1500ºF the decomposition will change and become more sluggish increasing the CO2, water vapor, and methane (CH4) while decreasing the CO and H2, and herein lies the problem: Oxygen or carbon probes are factory calibrated assuming the CO is always about 20 percent plus or minus or a small fraction. If the percent CO changes and the probe doesn’t know it the carbon potential (CP) will not be accurate; lower CO equals a lower CP. Therefore most all nitrogen-methanol systems must have a CO analyzer to constantly correct the probe CP. Why would the CO concentration change? Liquid methanol must be pumped or pushed from the storage tank located typically outside the building in an anti-spill containment area, through a liquid flowmeter located at the furnace. Pumps sometimes fail unexpectedly so the only option is to push the methanol by pressurizing nitrogen above the liquid and force it through plant piping to the furnace and that creates another issue; potential nitrogen bubbles in the methanol. If nitrogen is entrained in the liquid methanol, the capacity through the flowmeter changes again affecting the decomposition ratio.

Methanol, when either standard delivery system is employed, always enters the furnace hot zone as a liquid in the same inlet pipe as nitrogen and both are injected via a sparger usually positioned near the roof mounted recirculation fan. Before methanol can decompose to CO and H2 it first must vaporize to a gas – sounds like an obvious necessity and it is. However, when the furnace temperature is reduced to 1550ºF (843º) or lower, the pre-quench temperature to control distortion in gears the decomposition ratio again can change affecting the oxygen probe accuracy just when the carbon potential is most critical.

Because of liquid flow uncertainties mentioned above process control systems have had to adapt by creating complex software to recover the case carbon profile (adding to the carburizing program segment) as a result of the atmosphere providing less carbon to the steel than expected. I believe the preponderance of expensive, complex and sophisticated multi-gas process control systems in Europe and in the U.S. for carburizing gears are a direct result of the unpredictability of insitu atmospheres such as nitrogen-methanol and other hydrocarbon based systems. Where with generator manufactured endo gas it’s basically “set it and practically forget it” and let the much more simplified dew point based control systems maintain the furnace atmosphere. To be sure, endo generators require periodic planned maintenance, but for 24/7/365 carburizing compared to nitrogen methanol, generator created endo gas is a no-brainer.