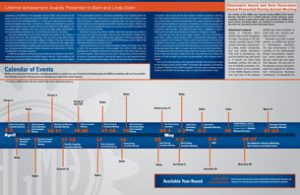 Two things we hear about most often from members are a need for new employees and a need to train them. Companies struggling with fewer employees and companies who are flush with business find it hard to send employees out for the training they need. In an effort to help solve this problem the AGMA Webinar Series was developed. Our goal with the series is to reach as many people as possible, and in a way that is easy to fit into any schedule or budget.

This series provides a rare opportunity to learn from and interact with the experts in the gear industry. It is a great way to train your whole office, with no travel expense or time away from your site. With just a computer with Internet access you are able to watch the presentation, submit questions, and participate in audience polls—it’s the next best thing to being there. We often hear that participating with colleagues provides great networking and knowledge sharing as participants discuss the program they have just seen.

If the scheduled time is inconvenient, a download or CD of the live program is the answer. Education at your fingertips at any time is possible with the archived webinars that are available for purchase as a download or CD 24/7. The archived downloads and CDs all contain a very complete package with the handout file, the Windows Media Video of the entire program, and the MP3 file (in case you want to listen to the audio alone).

This series began last May with a program titled “Gear Microgeometry Based Load Distribution Analysis for Gear Noise, Dynamics, and Design Assessments” presented by Dr. Donald Houser. Since then the series has continued to draw participants on a monthly basis for programs on technical topics such as metallurgy of gear materials, cutting feeds and speeds, root fillet configuration and design, and development of high-precision molded plastic gear transmissions. We have also presented economic and business topics that are important to the industry such as demographics and economic and industrial market prospects.

Our most recent webinar—which had 85 registrants and more than 200 people viewing—was an “Introduction to Gear Rating Suite 3.0” presented by John Rinaldo, an author of the software program. This webinar provided an overview and a live demonstration of the software as well as a chance for users or prospective users to ask questions. One attendee commented that “This webinar, presented by the authors of the program, is the best way to learn the software.”

The webinars are an introduction to the methodology of analytical gear inspection and the evaluation and interpretation of the resulting data. The application of this information to identify and correct manufacturing errors will begin to be explored. You will want to visit www.agma.org for a complete list of upcoming webinars, as well as our archived webinars. Programs will be added throughout the year.

Lifetime Achievement Awards Presented to Bipin and Linda Doshi
Leadership is the lifeblood of an association like the AGMA, and everyone should aspire to be like the couple that received the AGMA Lifetime Achievement Awards during the 2012 Annual Meeting March 15-17. Bipin and Linda Doshi have independently and together been major contributors to AGMA’s transformation and growth over the last quarter century. Schafer Gear joined the AGMA in the late eighties, and immediately Bipin, president, and Linda, corporate secretary, began participating in the Annual Meeting, Marketing Council, Small Business Council, and others.

In the early nineties Bipin and two other members were leaders in the creation of the Training School for Gear Manufacturing. This one-week course blends theory with hands-on experience at the Daley College in Chicago. It has been responsible for introducing hundreds of employees to the theory of gearing and has helped each one apply that knowledge by making a gear during the hands-on portion of the training. He received the Administrative Division Executive Committee Award in 1994 for his leadership in education programs.

In 1994 he was asked to join the board and served as vice president of the ADEC, predecessor to what we know as the BMEC today. In that role—and in addition to his advocacy for improving AGMA’s education offerings—he advocated for the creation of the individualized report for companies participating in the Operating Ratio Report, saving companies untold hours of comparing their individual company results with the industry’s median financial and operating ratios. He served his term as a board member and eventually became AGMA’s chairman from March 1999 through March 2000. He has subsequently served as a trustee to the AGMA Foundation and currently serves as its treasurer.

While Bipin has been very active in AGMA, Linda Doshi has been just as active in the industry and with the association. She has been instrumental in Schafer Gear’s involvement in AGMA. She has always been supportive at the Annual Meeting, the important international meetings such as EUROTRANS group, and at AGMA’s first International Business Conference in 2011.

Linda served two terms on the AGMA Foundation’s Board of Trustees, from 1997 to 2004. She was elected chair of the foundation from 2002 to 2004. Under her leadership the foundation sponsored the development of the three online courses for worker training. These courses are still used a decade later as the introduction for many to the gearing industry. Linda led the search for a new executive director for the foundation and worked closely with the new executive director for a successful transition. She worked with the Gear Research Institute to develop a Visioning and Road-mapping Workshop to look at the major forces affecting the industry in the coming decade. During her administration the trustees revised the foundation’s research grant guidelines to incorporate considerations for intellectual property, and the foundation made its first international research grant to the University of Aachen in Germany. More recently, Linda played important roles in delegations to Italy in 2008 and the first International Business Conference in Budapest, Hungary.

This is just a small sampling of the dedication that Bipin and Linda have shown to both the gear industry and the AGMA. Fortunately, after decades of volunteering on behalf of AGMA and the AGMA Foundation and many years of helping improve AGMA for the benefit of all members, there is no sign the Doshis plan to stop.

Chairman’s Award
Earlier in February 2012, AGMA held a trade delegation to India. The group of 18 individuals traveled about 2,000 miles in five days visiting seven cities, seven companies, and one coffee plantation. This was a demanding, trip but the benefit was well worth it. It would not have been possible without the help of one of AGMA’s members, Sulaiman Jamal. He is a member of the AGMA Board of Directors, and one of the reasons AGMA has more members in India than any country outside of North America.

Sulaiman has been a great advisor as AGMA has grown in international members. He was instrumental in the creation of the International Power Transmission Exposition, which opened in Mumbai two years ago and again this February. He was part of the advisory group that developed the program for AGMA’s first International Business Conference. To recognize his leadership and hands-on assistance with AGMA’s activities internationally, and especially in India, he was presented with the Chairman’s Award.

In the six short years since Rustin has joined the gear industry and Forest City Gear, he has become very active within AGMA as a leader of both the Strategic Resources Network and the Annual Meeting Planning Committee. He has demonstrated significant leadership skills guiding the members of the Annual Meeting Planning Committee over the last three years. He has kept the group on target and engaged as they brainstorm ideas for speakers and events for our Annual Meetings, and also worked with the staff of AGMA and ABMA to execute the committee’s ideas. He has taken time away from his young family, copious duties at Forest City Gear, and his studies for his MBA to guarantee the success of the combined annual meeting the last few years.

In addition to his duties as Annual Committee chair he was instrumental in the formation of AGMA’s Strategic Resources Network, a group of younger industry executives who promote professional development opportunities and networking within the gear industry. And for this Annual Meeting he married his involvement with the SRN with his duties as Annual Meeting chairman, gathering a dozen of his SRN colleagues together to help sponsor the Capitol Steps. He was assisted in this effort by last year’s Next Generation Award winner Cory Sanderson, of Koepfer America. Rustin has been a willing participant in many other AGMA endeavors. AGMA is proud to honor him with this year’s Next Generation Award, looking forward to his many years with the gear industry and the AGMA.

Members are the AGMA customer: We exist because you find value...

26 presentations to boast latest gear innovations at 2019 FTM in...

Why a trade association might be that missing piece for your...

Leaders should get away from the office

Networking at All Levels of the Industry