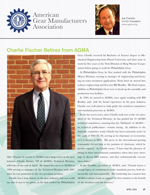 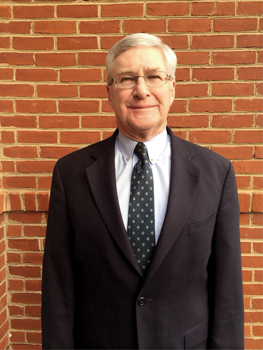 After 20 years of service to AGMA and a long career in the gear industry, Charlie Fischer, VP of AGMA’s Technical Division, will retire at the end of April.  He began his career at AGMA in 1994 serving as manager of the Technical Division until 2007 when he was promoted to the vice president position.

In 1994, he moved to AGMA, once again working with Bill Bradley and, with his broad experience in the gear industry, Charlie was well-suited to help guide the technical committees and standards processes at AGMA.

In the last seven years, since Charlie took over as the vice president of the Technical Division, he has guided the 25 AGMA technical committees, ensuring that the “lifeblood” of AGMA—its technical publications—remain strong.  In addition to the domestic committee work, Charlie has been extremely active in the work of ISO TC 60, serving as its chairman (or secretariat, as it is known in ISO).  His peers in the international gearing community elected him to the position of chairman, which he greatly enjoyed.  As Charlie wrote, “I have had the pleasure of sitting in these international committees when they have meetings to discuss ISO matters, and they enthusiastically execute these duties.”

As Joe Franklin, president of AGMA, said, “Charlie leaves a strong legacy of commitment to the standards process, both domestically and internationally.  His leadership has ensured that AGMA is always ready to support the best solution to the benefit of the members and the industry.”

Three Advanced Gearing Courses Available in May and June
AGMA is looking forward to an education-packed next few months. Registration is now open for all of the following events at www.agma.org. So far this year, almost all of AGMA’s events have sold out, so don’t wait to register for these events!

Gearbox System Design: The Rest of the Story…Everything but the Gears and Bearings!
May 13-15 | Clearwater, FL
The design of a gearbox system is much like a Hollywood movie production—the “stars” often get the recognition, while the “supporting cast” barely gets a mention! In a gearbox system, the stars are the gears and bearings; the supporting cast is everything else, including seals, lubrication, lubricants, housings, breathers, and other details.

This program addresses what gear engineers can do to optimize the gearbox system—from the housings to the lubrication and much more.

The seminar starts with the basics: history of design, the environment in which the gearbox must “live,” and the loading to which the system will be subjected in service. Loading includes starting/stopping, continuous, reversing, cyclic, and possible errant loads conditions.

The concept of a detailed design layout “Bible” will be introduced and explained as the basis for the overall design and analysis. The specific topics will include:

The treatment starts with basics, such as some history of design, the environment in which the gearbox must “live” and the loading to which the system will be subjected. Loading includes starting/stopping, continuous, reversing, cyclic and possible errant loads conditions.

Gear Failure Analysis Seminar
June 9-11 | Big Sky, MT
Avoid gear failure and save thousands of dollars in repair costs by knowing what causes gear failure and how to prevent it from occurring. This course is a perennial sell-out, and is limited to 30 students, so register soon!

In the Gear Failure Analysis Seminar, students will examine the various types of gear failure, such as macropitting, micropitting, scuffing, tooth wear, and breakage. Possible causes of these failures will be presented, along with some suggested ways to avoid them.

Gear failure analysis expert Robert Errichello will use a variety of tools and methods—lectures, slide presentations, hands-on workshops with failed gears, and Q&A sessions—to give students a comprehensive understanding of the reasons for gear failure. Participants are encouraged to bring their own failed gears or photographs and discuss them during the Q&A sessions.

The seminar brings together a vast amount of knowledge not available elsewhere. It will help solve the everyday problems that gear engineers, users, researchers, maintenance technicians, lubricant experts, and managers face.

Gear Manufacturing & Inspection: Methods, Practices, Application, and Interpretation for the Design Engineer
June 17-19 | Rosemont, IL
In this seminar, students gain a broad understanding of the methods used to manufacture and inspect gears—and much more. The course takes the process one step further, teaching how the resultant information can be applied and interpreted in the design process.

Most gear inspection centers on gear tooth geometry. However, various nondestructive and destructive tests (such as ultrasonic, magnetic particle, acid etch, etc.) are also required to ensure the quality of the basic gear material and the results of various heat treatment procedures. This seminar covers the basics of a variety of these tests, including their underlying theory, application techniques and, most importantly, interpretation of the resultant data.

This seminar aims to narrow and possibly close the information gap by providing gear design engineers with a good foundation in both manufacturing and inspections processes and procedures.

Please note: This seminar is not a tutorial in the mechanics of machine operation. Rather, the content addresses the relation between the manufacturing/inspection sequence and the detailed gear design process.

More seminars and webinars will be announced soon, so make sure to visit www.agma.org often for the latest information!

The new Board members will begin their three-year term at the AGMA Annual Meeting in April.

Ken Flowers began his career at American Pfauter as an electrician building electrical panels while attending Illinois Institute of Technology working towards his goal of electrical engineering and computer science degrees. During his nine years with American Pfauter, his duties included startup and debugging of CNC machines and worldwide service, eventually becoming the software team leader. He switched career paths to NUM Corporation in the late 1980s where he assumed the position of application engineering manager for high-end CNC control systems. He developed the first fully conversational based gear cutting software for NUM in the early 1990s, much of which is still in use today.

In 1995, after five years at NUM Corporation and with an ever-widening variety of CNC controls experience, he launched his current business with a partner Ron Peiffer (from Bourn and Koch) to retrofit and repair machine tools. Immediately the duo began to focus on gear cutting equipment, and have specialized in this area ever since. Growth has been steady and controlled over the last 18 years with the company growing from two people to 29 people. They acquired a permanent location in Machesney Park, Ill. in 2000, and added a 20,000 sq. ft. addition in 2013. They continue to specialize in rebuilding, recontrolling, and repairing all forms of gear manufacturing equipment.

Ken now resides in Roscoe, Ill. He has two children—a son, 27, who graduated from Bradley University, and a daughter, 17, attending her senior year at Hampshire high school.

Bill Gornicki started his career in vacuum furnace systems in 1990 with Abar Ipsen Industries in their Feasterville, Penn. facility. Prior to the start in furnace systems, he was with Unisys Corporation and SPS Technologies within their technical publications departments. Bill’s education includes a technical degree in Communications from the Art Institute of Pittsburgh and continued studies at various other colleges and universities. After more than 16 years of growth in the furnace industry as a technical writer, project manager, marketing services manager, and region sales manager, Bill relocated to Wixom, Mich. and joined ALD-Holcroft to manage sales and marketing. He was quickly promoted to vice president. The then-fledgling company has since gained a solid foothold in the market to now be the respected, technical resource known today.

Married for 23 years to wife Gwen, they have two children: Doug, who lives in Pennsylvania, and Sara, who lives in Illinois. Bill and Gwen are now proud first-time grandparents to Emma.

John Grazia began his career in the gear industry with GearTec in 2006 as its national sales manager and became president in 2008 when United Stars purchased the company. John has a Bachelor of Sciences in Business Administration degree from John Carroll University in Cleveland, Ohio. He has been involved with the AGMA Strategic Resources Network since 2007 and has recently joined the planning committee for the SRN.

Married for 25 years to wife Sue, they have four children, Emily 21, Hannah 19, Mathew 17, and Joey 10. They live in Kirtland, Ohio outside of Cleveland.

Brian Schultz is the president of Great Lakes Industry, Inc. (GLI), a privately held precision gear manufacturer in Jackson, Mich. Previously, as vice president of engineering, Brian led GLI’s significant investments required to support growth in its precision gearing product line. Prior to joining GLI in 2004, he was a manager with Accenture’s global consulting practice where he led the implementation of multiple information technology systems for many global clients in the United States, Europe, and Asia. Brian holds a Manufacturing Engineering Technology Degree from the University of Dayton.

Brian and his wife Emily have three children.

Education at Your Fingertips!