An investigation of the stresses and deflections of a floating ring gear with external splines working in a large planetary wheel motor of a mining truck.

The design of a planetary ring gear is always a challenge due to the contradictive requirements it must comply with. On one hand, the ring gear should be strong and stiff enough to successfully carry the applied load. On the other hand, it should have as small volume as possible to account for the radial restraints of a planetary gearbox imposed by the truck tires. Additionally, the ring gears are floating in many cases. Altogether, the designer job becomes very complicated.

One of the design issues of the strength calculations of the ring gear is that none of the American Gear Manufacturers Association (AGMA) standards, including ANSI/AGMA 2001-D04 [1], rate internal gears. No acceptable methodology is defined to calculate geometry factor for internal gears, following the method for external gears in ANSI/AGMA 908-B89 [2]. ANSI/AGMA 2001-D04 provides guidelines for the calculations of the ring gear rim thickness by introducing the rim thickness factor.

Very often the ring gears have external spline teeth, which transmit the torque to the final driven member of the gearbox. ANSI/AGMA6123-B06 [3] gives a methodology for calculating splines, which include shear capacity, fretting, and wear as well as ring bursting. The standard assumes that 50% of the splines are carrying the torque. Other approaches suggest different ways to calculate splines [7].

Because of these difficulties in the engineering design of ring gears, more and more researchers are using modern calculation methods like FEA. One researcher showed that when properly used, FEA and AGMA methods give closer results [6]. In this study a ring gear assembly is evaluated using FEA software in order to determine the stresses and deflections in the system.

The applied torque is assumed to be equally divided among the three planets per ANSI/AGMA6123-B06 (Figure 3), which recommends a mesh load factor of “unity” for high speed and high quality gears for the presented case. For the purpose of this study the force acting on each tooth is applied at the highest point of single tooth contact for each location (Figure 4) and equally distributed along the line of contact, which means using load distribution factor of “unity.”

The application of the force transmitted through the splines is determined by the FEA software. The ring gear is floating in all directions. The radial and circular movement of the gear is limited by the backlash in the assembly and the axial movement is restricted by axial stoppers, which are not shown.

Using a cylindrical coordinate system, the loads were applied on three internal teeth of the ring gear. Contact pairs were used to capture the interaction between ring gear and torque tube splines. These contact pairs were defined between the mating surfaces of the ring gear’s external splines and the torque tube’s internal splines. The model had about 3.5 million nodes and the analysis was run on a supercomputer in order to obtain results in a reasonable time frame.

FEA snapshots of only the overall displacement magnitude of the ring gear and the splines stresses are shown on Figure 6 and Figure 7. Von Mises, maximum and minimum principle root stresses in locations I, II, and III of only one tooth flank (Figure 8) of the ring gear teeth and external splines, and torque tube internal splines, are shown on the graphs of Figure 9 through Figure 17.

• The analysis shows heavy triangulation of the ring gear (Figure 6).

• Only about 10% of the splines teeth carry most of the load at the same time.

• Close analysis of these stressed teeth (not shown) points out that the stresses are not evenly distributed and only few teeth at a time take the highest load. This leads to the conclusion that the fatigue calculations of splines with similar behavior are as important as the shearing and wearing calculations.

• In many instances the principle stresses are higher than the allowable fatigue stress numbers per ANSI/AGMA 2001-D04.

• The higher crowning increases the stresses and that is why the stresses in zone 2 are generally smaller than the other zones.

• The smaller root radius increases the stress and this is clearly seen in the highest stresses in zone 3.

• The results from the FEA study confirm the field feedback.

• The FEA is an effective method of analyzing and predicting the complicated deflections of floating planetary ring gears.

Limitations of the Study

• Only two parts of the entire wheel motor are used in this study — the ring gear and the torque tube. If other parts like the hub, the wheel bearings, the planets, etc. and stress-influencing factors like the truck load were added, the stiffness of the investigated mechanical system would change and the results would be different.

• The force transmitted from the planets to the internal teeth of the ring gear was applied at the highest point of single tooth contact and uniformly distributed along the tooth surface. In reality the force may not be at that point for flexible systems and certainly would not be distributed evenly.

• Only three zones of the ring gear were modeled with different crowning and root radii, which limit the understanding of their influence on the stresses.

2. AGMA 908 – B89, “Geometry Factors for Determining the Pitting Resistance and Bending Strength of Spur, Helical and Herringbone Gear Teeth”

6. Kirov, V., “Comparison of the AGMA and FEA Calculations of Gears and Gearbox Components Applied in the Environment of Small Gear Company,” 10FTM05 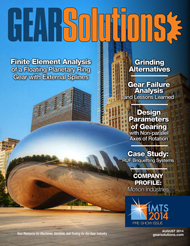 Lead or Helix? That is the Question