Home Features Are Energy Answers Blowing in the Wind?

Wind farming–already a viable energy source in Europe and some U.S. states—may present a promising new market for gear manufacturers. Here’s a progress report straight from the field.

Renewable Wind Energy Production (RWEP) in Wyoming has been related to three locations in the state: Cheyenne, Arlington, and Evanston. The listing is in accordance with facility age and size in terms of total capacity in megawatts.

Wyoming is in an enviable position regarding its assets, with huge public-land reserves for oil, natural gas, coal, etc., exploration drilling and production, and an abundance of potential premium wind farm sites. In spite of this, local, statewide, and national media coverage of the Evanston wind farm installation and operation hasn’t amounted to much. And even some of what has been printed has taken an unjustifiably negative tone, with little or no follow-up response. This provides one of the two main reasons for undertaking the subject tour and visitation by this author and my associate, according to the second and third sections of this article.

A second — and equally important — reason for this article stems from the power, mechanical, and gear design/manufacturing/QC engineering aspects relative to the somewhat limited scope of the three-phase NREL project that is also discussed.

As the seat of Uinta County, Evanston is located in the southwest corner of Wyoming. Northeast of the city, on the Bear River Divide, is the majestic site of the 80 wind turbines, of 1.8 megawatt capacity each. The $150 million, 144 megawatt system, capable of serving 43,000 homes, was completed on time and within budget. It was moved online in January 2004. The actual construction period involved some 112 days.

The wheel of each turbine measures 262 feet (79.9 m) in outside diameter, at the tips of the three angularly equidistant blades per wheel. The shaft speed of the turbines is 17 revolutions per minute, which is lower than that of most other wind turbine applications. This is claimed to be favorable for the safety of birds, efficiency of operation, and related engineering and other considerations.

The respective technology has been developed and used in Europe, and also in California. All of the design engineering variables presented above, and other related data and information, are in the public domain. They are considered to be suitable for the sake of this article, but they are not intended for any other purpose.

The facility is owned and operated by FPL Energy, a utility firm in Florida. PPM Energy in Portland, Oregon, a division of Scottish Power, has been purchasing power from the Uinta County facility to market to Wyoming, Utah, and Colorado customers.

Being situated on public and private grazing lands, the project was made possible by two measures of the legislature: 1) by making public land available for wind farms, just like for oil and gas exploration drilling and production, in the interest of a more favorable overall ratio of renewable to nonrenewable energy components for the production of electricity, and; 2) by giving a tax break on equipment purchased to produce electricity from renewable wind energy.

Highlights of the Wind Farm Visit

Driving westbound on Interstate 80, five to 10 miles before reaching Evanston, some of the wind turbines along the skyline at right provide fine vistas for travelers on the lookout. Driving from the west on the thruway, the site is unnoticed by most travelers. Turning off Interstate 80 onto a northbound gravel road, about five miles east of Evanston, you’ll drive about a mile before reaching the winding one-lane gravel service road of the wind farm. Soon after beginning to drive on this narrow road we noticed that both shoulders had been carefully cultivated to provide a viable growth space for native grass.

The smallest group of wind turbines has five units (Figure 1), while the larger ones have about a dozen or two units, closely following the ridges and rims of the mountainous landscape, which is covered primarily by sagebrush. The 80 wind turbines — each an exact replica of the other — are far too few to provide a “crowded” aspect to the enormous, desolate landscape. Instead, it was our opinion that they offer a positive aesthetic quality to the viewer (Figure 2).

The tapered, tubular support structure of each wind turbine measures about 147 inches (373 cm) in outside diameter at its circular ring bottom flange of 5.75-inch (14.6 cm) wide and 2.75-inch (7.00 cm) high cross section, held in place by sixty anchor bolts of 1.5 inches (3.81 cm) major diameter each (please refer to the base of the leftmost tower in Figure 3).

Spinning slowly at 17 rpm, and high overhead, the huge turbine blades create hardly any air movement on the ground that would be unpleasant, or even noticeable, to visitors. Only the regularly occurring swishing sound of the blades, at 1.2-second periods, fill the air. As an acoustic backdrop, the sounds of the blades of the next and second next neighbor wind turbines can be heard at correspondingly fainter audio levels.

The wind farm site tour concluded with a brief and impromptu meeting with members of a group visiting from Texas. We saw no one else during our two-hour tour on August 1, 2004.

According to statistics, a record 1,687 megawatt new capacity of wind energy equipment was installed in the United States in 2003. Based on this figure, the 144 megawatt capacity of the Evanston facility represents an extra 8.54 percent, which is a significant percentage. The corresponding figures for worldwide installations can safely be estimated at similarly significant or even higher values.

A three-phase WindPACT (Wind Partnerships for Advanced Component Technologies) project is spearheaded by the NREL — or the National Renewable Energy Laboratory, a U.S. Department of Energy Laboratory in Golden, Colorado, that is operated by Midwest Research Institute/Battelle/Bechtel — in a subcontract arrangement with GEC (Global Energy Concepts, LLC, which is based in Kirkland, Washington). A brief review of Phases I through III of the project is as follows.

As a subcontractor, GEC completed a Phase I Report (PIR) titled “Alternative Design Study: WindPACT Advanced Wind Turbine Drive Train Designs Study” between November 1, 2000 and February 28, 2002. An Acrobat file of the 556-page PIR can be downloaded by visiting [www.nrel.gov/docs/fy03osti/33196.pdf].

Using a group of nine drive train design candidates, the objective of this phase was to evaluate candidate arrangements for various facets of feasibility, on which basis one or more arrangements could be selected for further consideration as optimal candidates. All nine drive train configurations were evaluated for 1.5 mW turbine size, and the results were then scaled to .75 mW and 3 mW capacities. One of the nine 1.5 mW designs has been referred to as the “baseline drive train,” and it is shown in Figure 4. The corresponding baseline gearbox is illustrated in Figure 5.

There were four gear increaser design variations considered during Phase I of the project, including parallel-shaft units and simple planetary units using straight and helical tooth gears. The PIR summarizes and documents the Phase I effort by describing the technical and economical results for several turbine drive train designs involving the gearbox, electrical generator, power electronics, and grid interface systems. The Phase II and Phase III effort is expected to be based on selecting one of the designs per PIR.

It followed directly from the WindPACT organizations involvedin the project, and the organization of the project itself, that no considerations were made regarding cycloidal (trochoidal) gear design/manufacturing/QC engineering concepts and options. However, this is not attributed to either WindPACT as an organization, or the support effort for PIR, but, in our opinion, as a shortcoming of NREL functions, which we’d hoped would act as a beacon leading to the development of truly Feasible Renewable Wind Energy Production (FRWEP) approaches of the future. It is still possible to come to terms with this dilemma by extending the scope of the NREL program to include a WindPACT2 project in conjunction with drive trains of cycloidal (trochoidal) rather than involute gearboxes or gear heads. In this manner the PIR could additionally serve as an important shortcut for WindPACT2, owing to many facets of the modular design engineering techniques that apply to the WindPACT project, which would apply to the WindPACT2 project as well.

Cycloidal gearboxes, transmissions, and gear heads (often referred to as Cyclo drives, or more simply, as Cyclos) have been known as well-established, mature product lines of the overall gear industry for the past four decades (please refer to Figure 6 and Figure 7). Vis a vis sliding-mesh type involute gears (especially helical gears), rolling-mesh action, and compact and robust Cycloidal gears capable of operating up to 500 percent overload capacity offer high mechanical efficiency for maintenance-free and long service life in FRWEP applications.

The Phase II studies were expected to be completed in 2004, or in 2005, depending on the particular situations surrounding this effort. It’s unlikely that a report will directly follow to cover Phase II upon its completion.

Building, testing, and the characterization of the proof-of-concept prototype is the objective of this phase. Future reports are expected to cover Phases II and III of the WindPACT project. 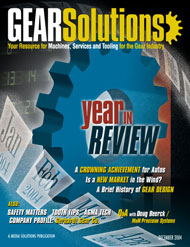