This paper provides an analysis of the benefits of optimizing the tooth root fillet of thin rim planet gears with asymmetric teeth.

The Direct Gear Design method optimizes various parameters and elements of gear tooth geometry to achieve the required gear drive performance. One such critical element of the tooth profile is the root fillet. Its optimization by means of Direct Gear Design provides the ultimate bending stress minimization. Previous publications [1, 3] described the tooth root fillet optimization assuming that both mating gears have a solid body.

This paper describes the analysis and optimization of the tooth root fillet in thin rim planet gears with asymmetric teeth, while also defining the location of the bearing roller relative to the planet gear tooth that causes maximum root stress. A comparison is also made of the optimized root fillet shapes and corresponding maximum bending stresses of planet gears with different values of rim thickness.

In Direct Gear Design [3], the tooth fillet is constructed after the involute flank parameters are completely defined. The goal is to achieve minimal stress concentration in the tooth fillet profile. As a result, the maximum bending stress is evenly distributed along a large portion of the fillet. Furthermore, the optimized root fillet must not interfere with the mating gear tooth tip. The root fillet optimization method, developed by Dr. Y.V. Shekhtman, uses three major procedures: the definition of functions for fillet profile approximation; FEA for stress calculation; and a random search algorithm to define the optimal set of coefficients for the trigonometric functions, allowing them to reach minimum bending stress. It is described in detail in [1].

The thin rim planet gear’s maximum root stress value varies depending on the supporting bearing rollers’ position (Figure 4). Two roller positions are considered: when the gear tooth is in line with a roller (Figure 4a) and when the tooth is between two rollers (Figure 4b).

The finite element model’s constraint conditions reflect the bearing rollers positions (Figure 5). FE nodes 1 represent the bearing roller contact points with the planet inner circle. They are radially constrained, but have freedom to move along the inner circle. FE nodes 2 at the left and right ends of the model are constrained in the tangent direction, but they have freedom to move in the radial direction.

The thin rim planet gear’s stress isograms and stress charts along the tooth profile are shown in Figure 6. The tooth root fillet is optimized assuming the sun gear load is applied to the high pressure angle tooth flank (Figure 6a). This allows one to reduce the maximum bending stress for tooth load applied both from the sun and the ring gears (Figure 6b).

Figure 8 demonstrates the optimized tooth root fillet profiles and inner diameters of the planet gear depending on rim thickness.

This paper describes the analysis and optimization of the tooth root fillet of thin rim planet gears with asymmetric teeth. The sun-planet gear engagement loading is selected for the root fillet optimization, because it produces a greater normal tooth force applied closer to the tooth tip in comparison to the planet-ring gear engagement loading. A tooth position in line with a bearing roller is chosen for root fillet optimization, because in this case the root stress is greater than if the tooth is located between two rollers. If the rim thickness is greater than 3.5 x module, tooth root stresses do not depend on the rim thickness. If the rim thickness is less than 3.5 x module, tooth root stresses grow exponentially as rim thickness is reduced. An application with a rim thickness that is less than 2.0 x module leads to a significant increase in planet tooth root stresses and is typically not recommended. The thinner the planet gear rim, the more its root diameter is defined by the optimized root fillet. This also reduces the root radial clearance, which could be undesirable for some applications.

About the authors Dr. A.L. Kapelevich and Dr. Y.V. Shekhtman are with AKGears, LLC, which is based in Shoreview, Minnesota. Learn more by visiting www.akgears.com. 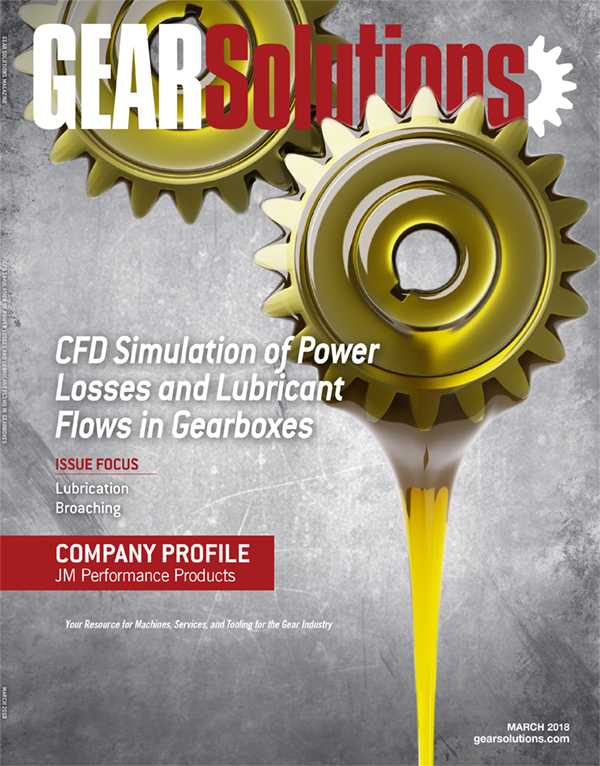 Why selective plating stops gears from grinding to a halt

Oil, grease, or dry: What is the best lubricant for my...