At a time when everyone has access to the same manufacturing technologies, the Drewco Corporation is helping its customers stand out with tailored solutions to their workholding needs.

Speed, efficiency, competition, accuracy… all words that fuel the fires of modern-day manufacturing. They are the “why” behind our daily tasks, as well as the reasons for invention and the motivation to compete–and what drives us to compete also forces us to improve. Today’s gear manufacturing arena is filled with obstacles that challenge us to find solutions to problems both old and new. And while many of the problems facing manufacturers 100 years ago have now been resolved, today we’re making improvements one micron at a time.

We all know that manufacturing gears can be a very fussy process, and the various classes that have been developed to define tooth form accuracy are evidence of the fact that the target is getting even smaller. Gear manufacturers are constantly being challenged to improve their operations, and often with no increase in cost. That’s why engineers must continue to improve the efficiency of the actual manufacturing process.

At the Drewco Corporation, our interest in solving work- and tool-holding problems goes far beyond issues of accuracy. In addition to holding tight tolerances, our challenge is to maintain accuracy while building universal tooling that will help customers compete in today’s just-in-time marketplace. Nobody can sustain vast inventories any longer, so the solution is to either get suppliers to hold inventory, or to devise faster set-ups. While the cost of set-ups would be absorbed by mass production numbers, with just-in-time quantities on hand, the time spent setting up represents a large part of the total cost and can’t be absorbed so easily. The result is that today’s manufacturers must find quicker set-ups.

In response, we have focused on helping our customers develop quick-change procedures, and a couple of examples highlight the unique concepts we’ve developed. One project allowed us to develop fixtures that share tooling between three existing machines of different makes and machines that must be able to run any of the 32 gears that need short-run production on a month-by-month basis. A second example involves the use of the internationally designed HSK adapter, which provides incredible repeatability as well as quick tool changes.

The challenge presented to Drewco by one customer involved developing specialized tooling that would accommodate specific short-run work, could run on a variety of existing machines, and could be changed over with ease. For the engineers, the challenge involved tooling up three hobbing machines, with different mounts and limits, so they could utilize the same tooling between them. With three machines, and over 30 set-ups, the engineering team set out to shave off as much time as possible. Three main issues needed to be addressed in order to accomplish this task:

Part sizes — In order to hold each of the various part sizes securely enough to allow ample metal removal for competitive production, a double clamping set-up was employed. This combination used face clamping as well as ID or OD chucking. The chucking on the ID/OD centralized the part and guaranteed the concentricity requirement necessary in the design of the gear. The face clamping aspect offered the rigidity that was required for the rapid metal removal.

The two clamping methods ensured the quality required as long as they were timed properly. The diameter chucking needed to happen first, which would locate the part according to a specified datum. On some parts this was an inside diameter, while others were outside. The face clamps, which offered the rigidity, activated next. Used together, the two clamping methods were able to produce a repeatable, solid, predictable set-up to cut teeth.

Drawbar — Activated collets were designed for each datum locating surface. This amounted to 32 different collets, but only three designs. This allowed for a reduced number of sub assemblies: one assembly for the OD gripping collets, and two for the ID. This aspect of the project reduces changeover time by limiting the amount of tooling, also reducing the initial investment in the same manner.

The face clamp sets also numbered 32. This aspect of the design had to be unique for each gear. They resemble a mixing bowl with holes, and their size and shape would push the clearance envelope. The intent was to get support out as close to the minor diameter as possible, with a minimal amount of mass. The parallelism accuracy of this detail translates into gear teeth that surpass perpendicularity requirements. These details needed to be changed for each different gear along with the collet. The subassemblies, too, had to be changed from time to time.

Quick change — Have you ever tried to put a square pin in a round hole? That’s what it feels like when you try to put a round shaft into a round hole with only two to five microns of clearance between them. And that’s the kind of allowable tolerance, used in mounting the subassemblies, that will give the accuracy required when cutting gears. How can the assembly and disassembly of these characteristically stubborn fits be accomplished quickly? The solution revolves around the hexagon.

By removing six sections of the circle on both the male and female part of the assembly, we were able to produce the desired fit with the desired assembly/disassembly speed. A slight twist between the two parts moves the contact points of the tight tolerance diameters into a bind-free zone that allows for immediate separation. The face contact between the two pieces prevents any of the misalignment that would cause the binding problem.

This part of the design is complimented by the addition of a slotted bolt circle. By including the radial slot, assembly involves simply loosening the mounting bolts and twisting to a point where the bolt head will slip through the mating part. This three-hole bolt pattern was also used to mount the face clamps, and this action allows the two-piece fit to occur without completely removing the bolt. If you tried separating the two parts, first with and then without the hexagonal design, you would surely agree that this design saves a tremendous amount of time–not only by freeing up the tight tolerance between the two parts, but also because of the time saved in threading the mounting bolts.

This design does have its drawbacks, however. It’s a challenge to build, and it requires more time to build. The timing relationship between the mounting bolts and the hexagon is crucial and can be confusing. The direction and length of the bolt slot must mirror the scallops and tapped holes of the mating part. The tight tolerance diameters, as well as perpendicularity, must be maintained.

The net result of this design is providing the ability to change from set-up to set-up in a few rather than several minutes. Break the three bolts loose, twist, remove the first set-up, insert the next set-up, twist, tighten the bolts, and you’re ready to go. The size-on-size relationship ensures repeatability, while the hex allows for the quick mating process. As a result, both the engineer and those responsible for assembly are happy.

Three machines in this case, the challenge was to fit this tooling with the three machines the customer owned. It originally involved two NC machines before the third machine was added in mid-design and this was the old standby machine that will never die. Each machine had its own design for mounting our package to and its own actuating mechanism, and each had its own work envelope. Satisfying all three machines was a clever accomplishment in itself.

Each machine was given its own main base that would accept the families of tooling and allow them to run any of the gears required. These three mounting details enabled the customer to store only one type of tooling for this department, thereby reducing the space required for the storage of tooling and allowing for uniform shelving to keep the tooling in a neat and orderly manner.

Two of the three machines had automatic drawbar mechanisms to hook up to, while the older machine needed to be manipulated manually. The net result was that we needed to adapt to two different drawbars while giving clearance for a wrench in the manually operated design. Over a six-month period we delivered families of details that enabled our customer to produce the gears required, one month at a time, until the whole library of parts were covered.

A second example of quick-change tooling that Drewco offers utilizes the internationally designed HSK-style mounting system. Producing this aspect properly is another tricky endeavor. For those who are unfamiliar with this design, it consists of a unique locking mechanism that is operated with a single hex key. What’s amazing about this design is the incredible accuracy that is repeated with such a simple clamping devise. By tightening one screw, the inner components pull the male and female parts together, creating a simultaneous contact between the locking taper and the faces. Thanks to this design, we are able to design tooling that can be switched out quickly and doesn’t require indicating that the first set-up has been completed.

We were recently challenged to design quick-change tooling for a series of smaller gears, which is a perfect application for the HSK design. This time, there were 13 parts that needed to be run across just one machine, and the gripping requirements for this family of parts were satisfied with collets alone. ID and OD chucking was again required, but the activation of both collet designs came from a tailstock center. The HSK adapter made this design possible.

The secret to our success in this case was the mating of the HSK system to our tooling. Keeping in mind that the HSK adaptor can only be assembled one way, we designed a buffer piece between our tooling and the female socket of the HSK system. This buffer employs a mounting method with stirr-around screws. The first set-up requires an indicating session that will marry the total assembly to the machine spindle. This first set-up allows future changeovers to be well under a minute.

The tooling required for this machine to run 13 parts can be stored on one shelf and represents a small portion of the total turnkey package. Considering the fact that set-up time has been reduced significantly, this package of tooling pays for itself quickly.

The Drewco Corporation has been involved in designing creative tooling/workholding solutions for the past 66 years. In providing solutions to the gear making industry, Drewco focuses on delivery, competitive pricing, and tight tolerance quality, working with gear customers to constantly improve their production times, increase their profitability, and make them more competitive in today’s market. 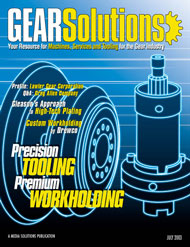