With a reputation for manufacturing some of the strongest and quietest automobile axle assemblies, production at the Getrag Axle Plant in Newton, North Carolina, has grown steadily over the years. Since 1999 production has increased from 68 axle assemblies to 1,800 per day, with the plant supplying high-end products for an expanding set of vehicles including General Motors’ Corvettes and Cadillacs and DaimlerChrysler’s PT Pacifica.

This growth has been driven by the plant’s ability to produce high-quality products at a competitive price. Impressive cost reductions have been achieved through innovative production processes. At the heart of the axle assembly are ring & pinion gears, which are produced using a gear generating process that cuts all the gears dry. The dry process results in significant savings in the purchase and disposal costs of coolants but places extra demands on their tooling, causing premature tool failure.

The Cost of Short Tool Life

“Our largest tool cost was carbide stick blades,” according to Tony Trimm, the engineer at Getrag responsible for gear cutting. “Improving tool life will reduce the downtime of our gear generating machines. In one year we performed 1,250 cutting head replacements, a procedure that costs about 40 minutes of production downtime, each and every time. We recognized that we needed to extend the life of the carbide blades to minimize this downtime and to achieve higher utilization of our expensive gear generating equipment, and to reduce unproductive labor activity spent regrinding tools.”

The unproductive labor consisted of the effort to change out the blades, as well as the effort to regrind the blades so that they could be reused. Because of the short life of the blades the plant carried an inventory of carbide worth $160-220K. The most significant cost was the diminished utilization of gear generating machines, each costing $600,000 to $1 million. (Figure 1)

Getrag tried several possible approaches to extending the life of the blades. They first tried using many different grades of carbide and various coatings, without achieving much improvement.

“I also tried a couple of different honing techniques,” Trimm says. “Sometimes, we would achieve good results, with a 30-40 percent improvement in tool life, and then we would get bad results on the second application of the same method. We could not find a process that would give us repeatable results until the middle of 2005, when we found the edge preparation process developed by Conicity.”

The EMG process is more consistent than conventional methods, applying the same edge preparation to tool after tool. This is accomplished by the software in the system’s CNC control, which manages all of the critical process variables. Moreover, the optimal micro-geometry can be applied precisely, according to the particular requirements of each cutting application. To determine the optimal edge preparation for Getrag’s gear generating application, Trimm worked closely with William Shaffer, executive vice president of Conicity Technologies and developer of the EMG technology.

“We were able to take advantage of Conicity’s world-leading expertise in edge preparation,” says Trimm. “For our gear generating application, Conicity determined that the optimal edge preparation is a slight radius, producing a good chip roll and making the tool cut more efficiently with less heat generated and less material trapped between the tool and the workpiece. This results in a smoother finish and less tool wear.”

Getrag outsourced the edge preparation process to Conicity. “After consistently achieving a 50-percent increase in tool life for each subsequent batch of blades, we decided to purchase our own machine so that we could perform the EMG edge preparation in-house.”

The Getrag plant installed a Conicity GXM-50A edge preparation system, with a capacity to hone 100 blades per hour. The GXM-50A was configured to take two trays of 30 blades directly from the grinding machine. Because of its small size, flexibility, and quick set-up, the GXM-50A is able to reduce production costs, improve part quality, and shorten lead times. (Figure 3)

“With the new edge preparation process, our machine utilization has increased significantly,” says Trimm. “As a result of the increased utilization of existing equipment, we will not need to buy and maintain as many gear generating machines as our plant expands capacity, saving us millions of dollars in equipment costs.”

The Newton plant is expected to increase production to 3,000 axle assemblies per day, and the increased machine utilization means that the plant can produce this volume with two to three fewer gear generating machines than would otherwise be required. Trimm has also been able to lower costs by reducing labor for changing out blades, as well as regrinding and blade inspection. Carbide blade inventory and replacement costs have also been reduced significantly.

“In our market we are under constant pressure to reduce costs, and the EMG edge preparation process has been a key contributor to our increased productivity and cost reduction,” says Trimm. “We are enjoying an excellent return on investment in this technology.” Due in part to Conicity’s expertise in the edge preparation process, Getrag has extended its leadership in the high-end automobile axle assembly industry. 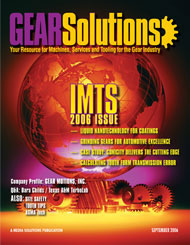 The advantages of pulse plasma nitriding

Heat treaters of old were onto something heating and cooling in...