Even when it comes to something like cutting bar stock, investing in the latest equipment can increase productivity and save you time—which easily translates to your bottom line!

Like links in a chain, every aspect of your manufacturing process is connected, and if one of them fails or isn’t performing up to your requirements, then you’re not getting the full return on the remainder of your capital investments. This is especially true if the piece of equipment is found early in the production process, such as a saw used to cut bar stock before any of the real work of shaping a gear can begin. Tom Treuden, who is president of Butler Gear Co., Inc., found himself in just such a situation in 2006.

“We were using an old hacksaw, and the machine was really getting worn out,” he says. “It was old and archaic, and it just wasn’t cutting straight lines anymore. Plus the tooling costs were pretty high since the blades wore out so quickly because the machine wasn’t aligned well anymore. And it just took forever for it to make a single cut!” 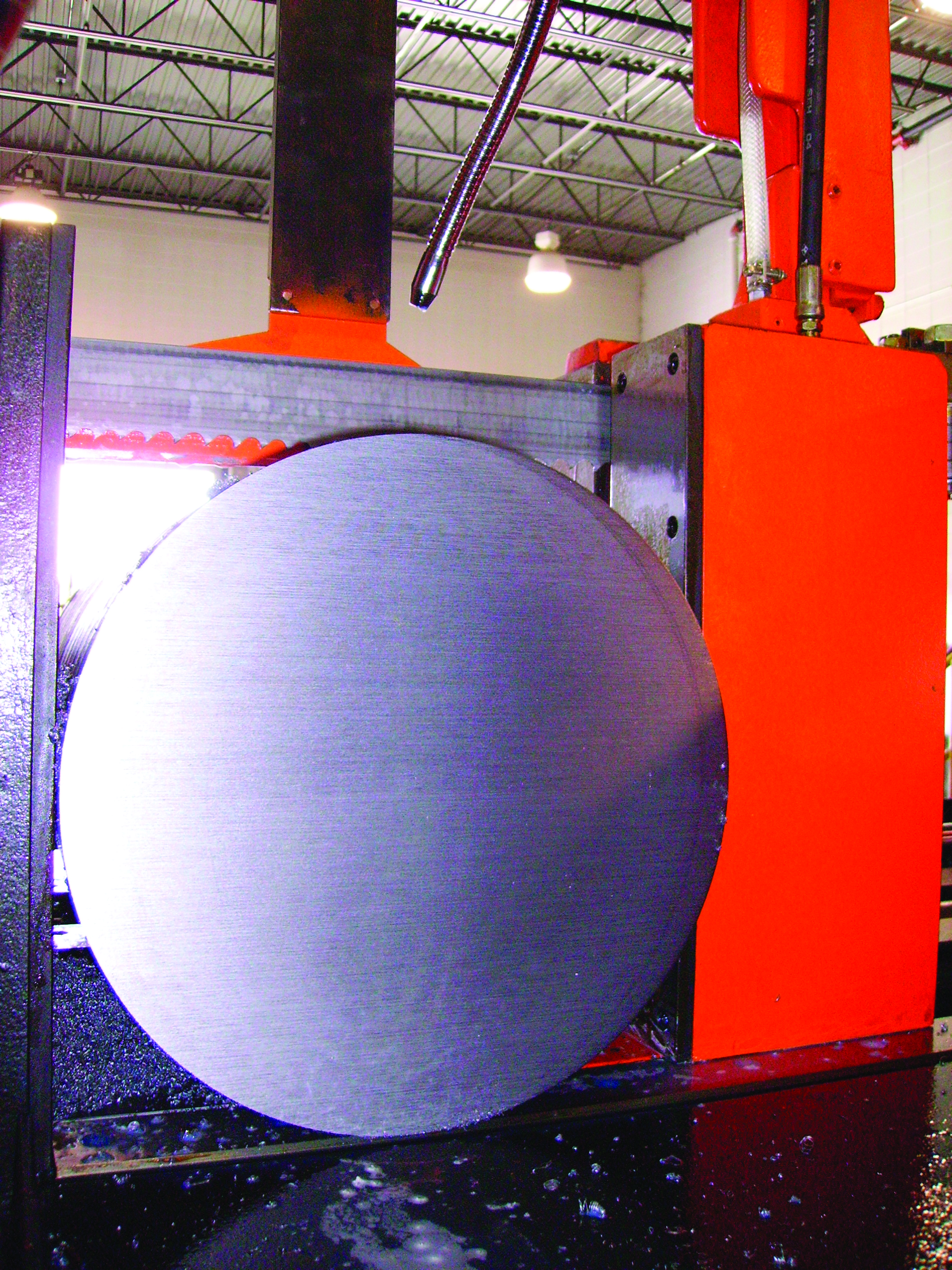 As can be expected, this one weak link was holding up the whole show, and Treuden knew it was time to make a change. While reading a metalworking magazine, he saw an advertisement for Cosen Saws, U.S.A., listing the different models the company offers. He decided to give them a call to learn more about their product line. “They were very responsive, and I didn’t feel that they were just trying to make a sale,” he says. “I worked with John Park, Cosen’s regional manager, and Peng Huang, the company’s vice president, and the first thing they did was begin asking questions about my operation—what I was doing, what problems I was encountering, and what I needed in terms of a saw that would eliminate those problems. That in itself made me feel good about the company, and I ended up learning a lot about saws in the process.”

Huang says the reasons for the problems Treuden was dealing with were easy to identify. “Just as he mentioned, he was working with a very old machine—basically a ‘turn of the century’ model,” he says. “In addition, a hack saw really wasn’t the best design for his particular application. I told him that a band saw would be much more accurate and reliable, and that he would be able to make cuts that were then taking two to three hours in 10 or 15 minutes, which he found to be a very attractive proposition.” 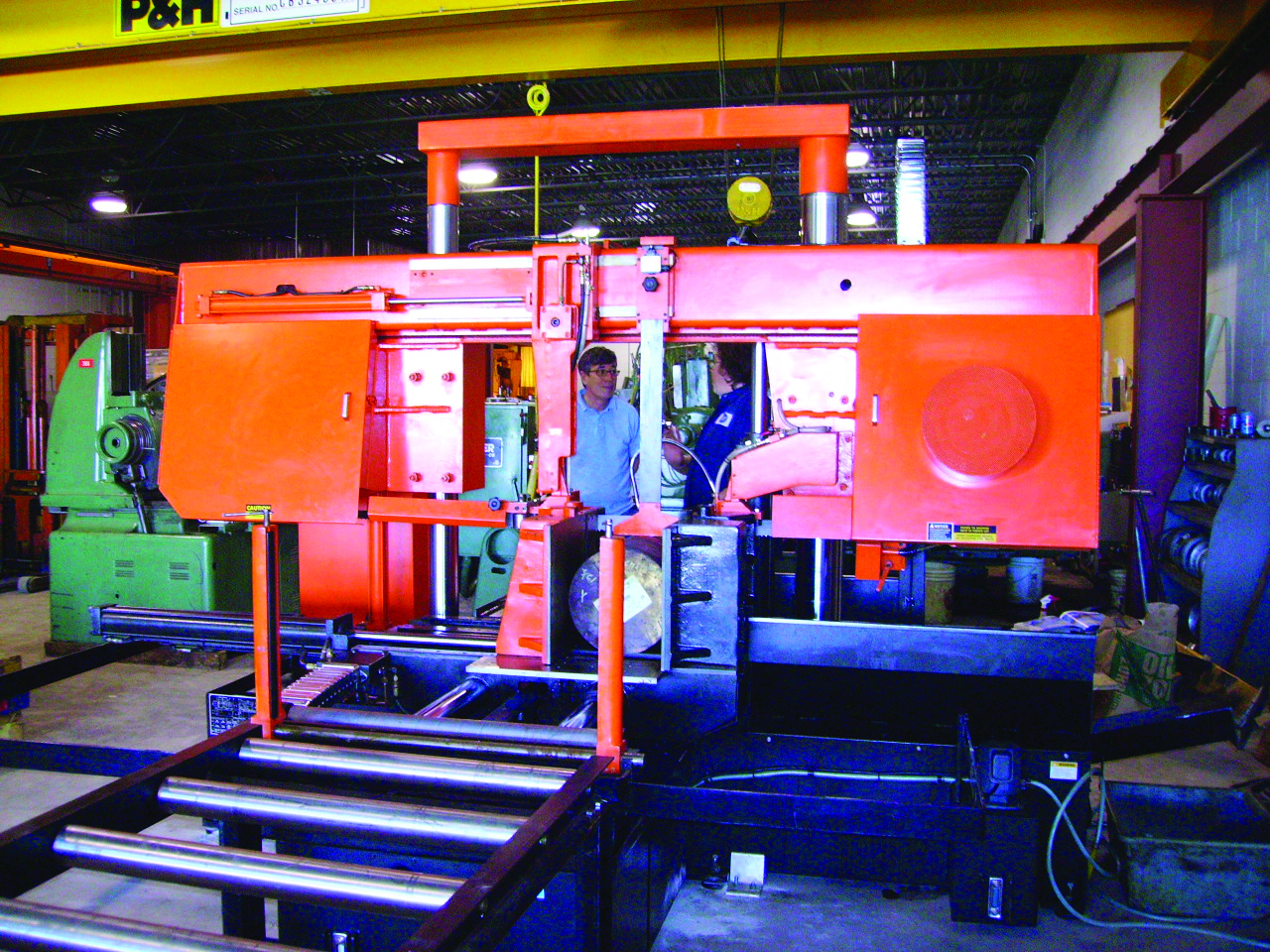 Many factors must be taken into consideration when choosing the right saw for a particular application, Huang explains, starting with the material to be cut as well as the shape in which it is delivered. Bar stock can be round, square, rectangular, or any number of other shapes depending on the part being manufactured, and harder materials may require more horsepower, a wider blade for rigidity, or specialized blades for penetration. Anyone who believes the most important consideration involves the size of the stock to be cut may encounter additional obstacles. “While that is a primary concern, of course, you also want to make sure that your saw is rigid enough to cut through the stock you’re working with,” he says. “In addition, you want the blade to be wide enough so that it doesn’t bend under stress, which would result in a crooked or bowl-shaped cut.”

Another consideration involves the fact that a crooked cut can make equipment involved in secondary operations work harder, as well—and this is often the machines for which the most money has been paid. Huang describes a less-than-optimum situation in which a saw is underbuilt or improperly tooled: “The reason companies decide to purchase bar stock is usually to save money, or that is one of the main benefits of doing so,” he says, “so you want to be able to cut it into the proper size for the parts you need quickly when you have an order to fulfill, and you don’t want to waste any of the material. If you’re not working with the right saw, the first problem is that it will take far longer than it should to cut the pieces. The second problem is that the cuts might not be straight if the saw isn’t rigid enough or designed properly, and that can force you to leave extra material on the part that must be eliminated during the secondary operation, tying up that machine and leading to unnecessary wear. And that extra material that’s basically being wasted can add up to a significant amount of money, which defeats the purpose of buying in bulk in the first place. We also incorporate a planetary gear drive into our design, which provides maximum sawing strength with minimal loss of mechanical power. So these are just a few of the things that must be taken into consideration when choosing the right saw for your operation.” 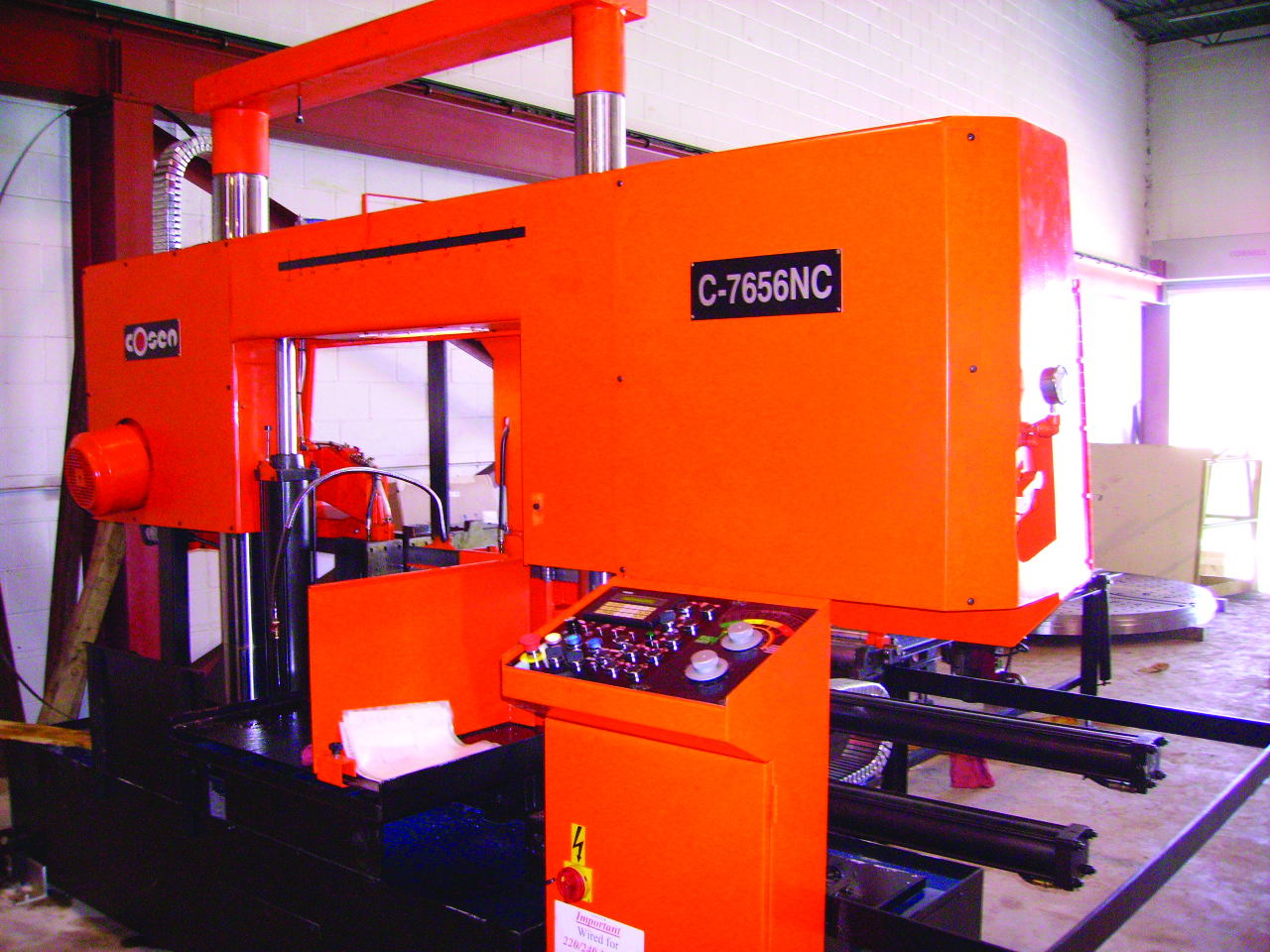 Even so, Treuden wanted to make sure that the company’s machines actually lived up to what he was learning about them, so he called a nearby manufacturer who had purchased a similar model to ask for their opinion. “They had nothing but good things to say about it,” he says, “and then I got a testimonial from a major steel manufacturer who felt the same way, so that pretty much made the case for me.”

Working together, the three men decided that a Cosen model C-7656NC 22” Programmable Bandsaw would be the way to go, and delivery was made in March of 2006. The results, Treuden says, have been even more impressive than he had hoped for. “The first improvement involves productivity,” he says. “With the old saw, I might’ve been able to pull three parts off of it in a day. But with the Cosen saw I could easily make 40 cuts if I needed to, and they would be straight—which saves me material—and the blades last longer since they’re not being worn away in a warped channel. Plus we’ve been running this saw for about a year and a half now, and we haven’t needed a single service call. So it’s just a tremendous machine, and it has really increased my productivity. I’d recommend it to anyone—and I have, in fact. I’ve already had two of their potential customers visit us to take a look at our saw, and I’d be glad to talk to anyone who’s interested in getting a firsthand take on how it works on the shop floor.” 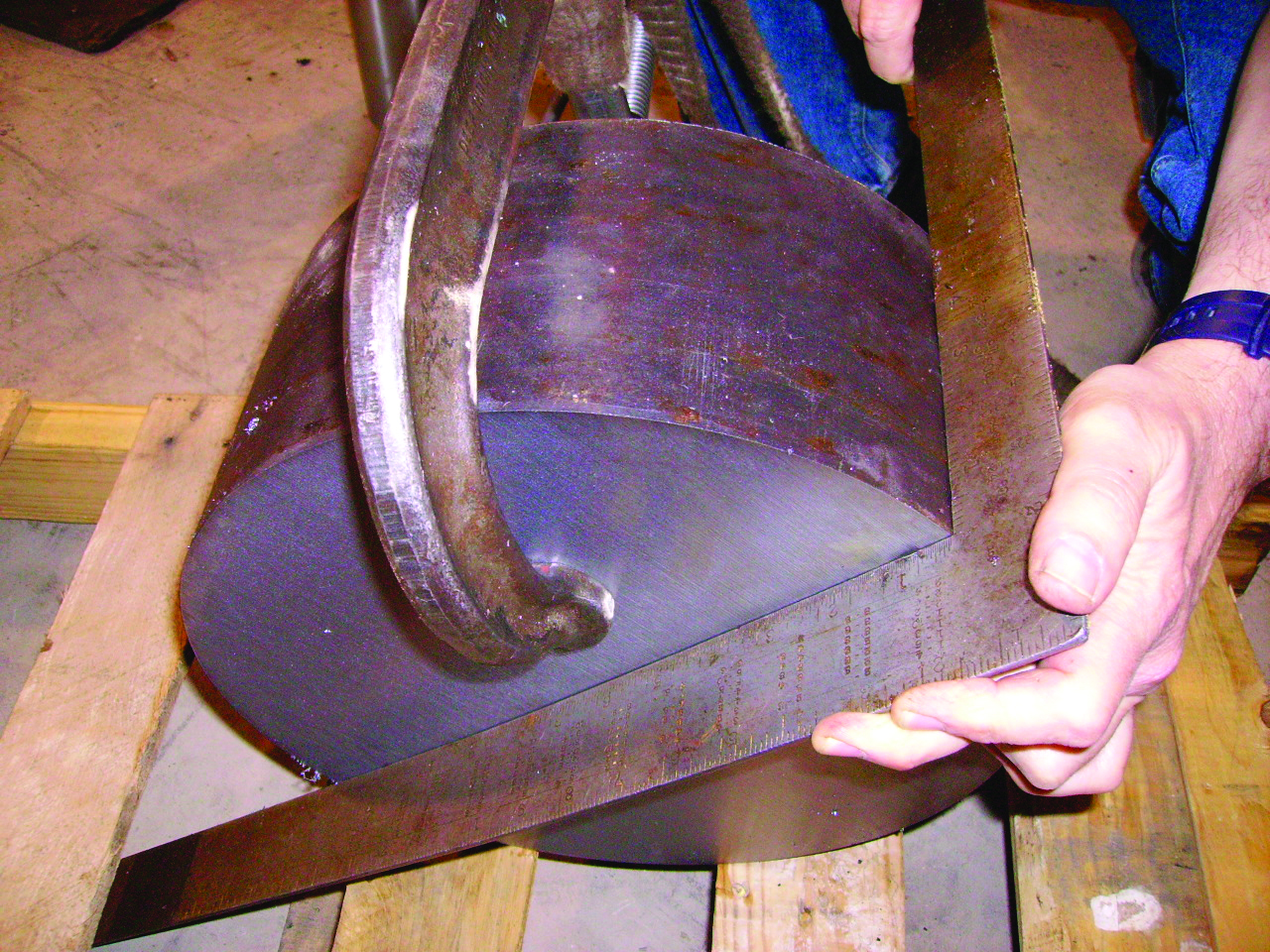 Huang says that he and his colleagues at Cosen work hard to achieve this same reaction from every customer they work with, building a relationship that begins with helping them make the proper choice of saws and extending throughout whatever service and maintenance assistance is required over the years. “We work with some of the biggest aerospace companies in the world all the way to ‘mom & pop’ job shops, and we take their needs equally seriously, no matter the size of their operation,” he says. “Cosen saws have been manufactured for more than 30 years now, so we’ve had time to polish our designs and to create an assortment of features that make our machines the sawing solution for an array of applications.”

Treuden says Cosen certainly presented the solution to the problem he was facing. “This was one of the easiest purchasing experiences I’ve ever been involved in,” he says. “Now I’m able to just let this machine run while I turn my attention to all of the other things I need to be doing, like manufacturing gears for our customers!” 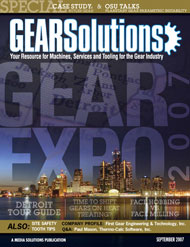