SKF’s bearing vibration analyzer has proven invaluable during the maintenance and refurbishment of gearboxes and other critical units in demanding applications.

Fifty years of ongoing development has given SKF a bearing vibration analyzer that can probe deep into rotating bearings while they are under load. Initially used as a production line tester, it’s now proving invaluable during the maintenance and refurbishment of gearboxes and other critical units in demanding applications such as aerospace.
SKF vibration testing equipment is released by Rolls-Royce for noise testing of bearings during gearbox servicing. Release became necessary when Rolls Royce Deutschland decided to transfer service work on gearboxes for secondary power systems to the sub-contractor Vector Aerospace in Almondbank, Scotland. Overhaul of these gearboxes requires detailed inspection of more than 3,000 components, some of which require testing with special equipment. This includes the various types of rolling bearings used in the gearbox that require stringent noise and vibration testing and measurement of the radial and axial clearances. (Figure 1)

Vector Aerospace selected SKF as the best suitable supplier of test equipment for the bearing tests, but before putting the equipment to use it was necessary to run a release process with Rolls-Royce Deutschland. A detailed test and acceptance program was developed by Rolls-Royce Deutschland using reference and series bearings of different manufacturers to confirm the usability of the noise-test equipment after its installation at the Vector Aerospace site. (Figure 2) 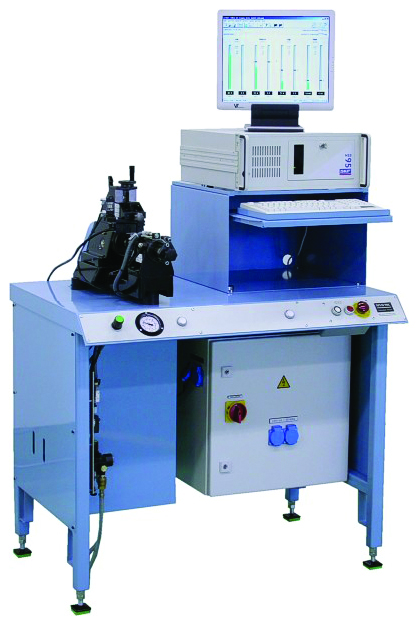 A good first step toward solving any problem is to get the facts, and that’s exactly what a group of senior engineers at SKF did in the early 1950s. SKF already had a proven reputation as the world’s leading rolling bearings manufacturer. Its bearings were used successfully in countless applications all around the world. They were made from the finest materials, using the most up-to-date production processes and carefully checked before packaging. So what was the problem?

It was said that, collectively, the group members knew everything there was to know about bearing materials, bearing design, bearing manufacture, and bearing applications, but the SKF engineers still had a problem. They were concerned about the causes of failure that bearings from all manufacturers were exhibiting. Minute exterior examination of bearing components and bearing assemblies could only take them so far. They needed more facts, wanting to probe deep inside a bearing while it was rotating and while it was under loads similar to those it would experience in service.

Intuitively they knew that vibrations caused by the rotating and flexible parts in a bearing caused noise and could be a source of wear and bearing damage. But they also felt that understanding the vibrations better could tell them even more; perhaps even what caused the vibration in the first place, and how to design and manufacture in order to reduce the vibrations and the corresponding wear. And so SKF set off on a path to develop an understanding of vibration phenomena in bearings, as well as a method of measuring vibrations and connecting this back to distinct causes, as specific as rolling elements induced vibration or damaged ring induced vibration, etc.

By the mid-1950s the group had successfully created their first vibration testing equipment for analyzing structure-borne noise and vibration in bearings. They went on to develop equipment that would reveal problems hidden within a bearing such as dirt particles, cage noise, or form deviations in a component. Their search had revealed the factors that could lead to bearing failure and customer dissatisfaction.

Early versions of the equipment were introduced into production line testing, but the group continued to probe further until one of its members, E. Yhland, reached a milestone in the understanding of the quasi-static problem of bearing vibration in 1965.

His work became a contribution to establishing national standards such as AFBMA 13-1987 and DIN 5426 (draft). These standards define and specify the physical quantities to be measured and the test conditions to be applied. The equipment became of extreme importance for high quality bearing production.

Today, SKF equipment such as the MVH Vibration Tester is used to precisely analyze the structure-borne noise and vibration of deep groove ball bearings, angular contact ball bearings, self-aligning ball bearings, and spherical roller bearings. The MVH is also used as the SKF reference equipment for these measurements.
Operation of the MVH 90C/200C Vibration Tester is semi-automatic, so when a bearing is to be tested the only things to be done by hand are: the loading of the bearing on the test spindle; the pressing of the two-handed start; and removal of the bearing after the test.

A pickup is applied to the stationary outer ring of the bearing and any bearing noise is measured, analyzed and displayed. After a predetermined time the axial loading unit returns to its rest position and the machine is ready for the next test cycle. Resetting for another type of bearing can be done quickly and simply.

The tip of the pickup rests against the outer ring and converts the radial vibration of the bearing into an electrical signal that is proportional to the velocity of the pickup tip. When the signal is amplified and analyzed, the vibration level is measured in three frequency bands. The result identifies one or more of a possible number of defect types as well as detecting dirt particles, cage noise, and form deviations.

The great success of vibration measuring equipment in bearing refurbishment for the aerospace industry has led to increasing interest from other areas of industry. There is also increasing awareness of the savings to be made from the re-use of bearings that have been tested and meet quality and reliability standards.

Other examples of the vibration tester’s versatility are its use in manufacturing companies, where the equipment can be used to inspect incoming components, and its use in research departments to support R&D activities or to act as a test rig for gears, motors, or steering units, etc. The equipment is equally useful for grease noise testing.

Although the bearing vibration analyzer has come a long way since the 1950s, its development continues at SKF, where the search is on for even more accurate measurements and analysis. At the present time research is focusing on three interesting areas: the application of different sensor technologies; the use of a detailed noise map; and the introduction of an expert system.