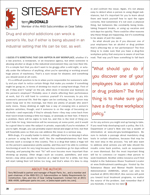 I guess it’s something that can happen in any workplace, whether it’s a law practice, a restaurant, or an insurance agency, but when someone is abusing alcohol or drugs in the industrial environment they can lose their life. It’s a simple fact that you don’t want to be groggy after a wild night, or actually under the influence of anything, when you’re operating or working around huge pieces of machinery. That’s a sure recipe for disaster, and something you should avoid at all costs.

It’s a difficult position to be in when you’re responsible for someone’s safety and you start to notice certain things that make you wonder if something might be going on, in terms of drinking too much or using hard drugs. First of all, if they aren’t “using” on the job, when does it become your business as the person’s employer? Probably once it starts affecting their performance at work, but it’s still hard to convince yourself it’s necessary to pry into someone’s personal life. And the signs can be confusing, too. A person may seem hung over in the mornings, but there are plenty of people who aren’t early risers. Heavy drinking at night has a way of creeping into a person’s daytime activities, though, and if someone is on the verge of becoming an alcoholic—and especially if they’re already there—they may come back from their lunch break looking a little too happy, or unsteady on their feet. If there’s a problem, there will be signs to look for, and this is the kind of thing you can’t hide for long. Intervention will be necessary at some point, and it would be a good idea to raise the subject in private, especially if you’re mistaken. If you’re right, though, you can probably expect denial and anger at first, but that will hopefully pass so that you can address the issue in a serious way.

With drugs, it’s usually harder to detect, although there’s no denying it when a person is using the harder stuff, like the methamphetamines that have become such a scourge in this country. This is a drug that takes a huge toll on the person’s appearance pretty quickly, and they won’t be able to continue functioning at work for very long because they sometimes go for days without sleeping, and pursuing the next “fix” will soon become more important than showing up anyway. Other drugs—such as cocaine, painkillers, and even heroin—may allow people to function at a higher level for a while, but they will start taking their toll before too long, and that’s when it’s time to step in and confront the issue. Again, it’s not always easy to detect when a person is using illegal substances, but it’s important for you to learn about them and teach yourself how to spot the signs correctly. And sometimes it’s not even a physical thing, but behaviors like constantly being broke, taking frequent breaks, or using up vacation and sick days too quickly. There could be other reasons why these things are happening, but it’s something to be aware of just the same.

So what should you do if you discover one of your employees has an alcohol or drug problem that’s affecting his or her performance? The first thing is to make sure that you have a drug-free workplace policy that everyone is aware of and has read. That way you’ll have something to fall back on for any actions you might end up having to take. If you need help developing such a policy, the U.S. Department of Labor’s Web site has a wealth of information at www.dol.gov/workingpartners. Be sure to include a passage about mandatory drug tests in certain situations, because that may be the next step in the process. You will also want to address what actions you will take should the results come back positive, such as suspension or even dismissal. But the most important thing will be to convince—or require—that person to seek treatment. Another online resource you’ll find helpful is the Substance Abuse Treatment Locator at www.findtreatment.samhsa.gov. Hosted by the Substance Abuse and Mental Health Services Administration (SAMHSA), which can also be reached at (800) 662-HELP, this service will point you toward local treatment programs, no matter the source of the problem. Just remember that if you hesitate, it may be too late!