Worm gearing has many benefits and usable attributes that are unique to this geometry. Gearing of this type dates to 4000 B.C. The “worm” as a form first appeared as a screw thread and was developed by Archimedes as a means to move water, a water pump, up a sluice. At this point the worm was not interacting with a wheel, there was no mesh, but the concept of sliding interaction was employed. The geometry progressed into a screw thread used to convert rotatory motion, the turning of the screw, into linear motion, the action of the collar.

This conversion of motion is still very commonly used today and we know it as a nut and bolt. However, we need a system that, instead of converting rotary to linear motion, couples input rotary motion to rotary motion. In our case, we can use the gear geometry to turn the power flow through a right angle (or other angle but we will focus on right angle for the time being).

There are a number of configurations with various names (Figure 1). The general term used is Globoidal Gears. Each configuration trades power density with wear rate. Worm gearing is a special case of screw gearing with the angle of axes 90° and a low number of pinion/worm teeth (mostly z1=1-4).

There is a fourth tooth form configuration but it is rarely, if ever, used. One could consider it the first step toward the Double Enveloping or Full Globoidal Gear form, simply labeled as Globoid Worm / Cylindrical Wheel (Figure 2). Note the straight wheel (no curvature). This adaptation does not provide much in the way of additional contact area, as such it is seldom used (if at all any more).

Worm gearing types are distinguished by shape and labeled and described as follows:

We further subdivide the geometry of worm and wheel gearing by classifying the tooth form. We use a two-letter designator to define tooth form geometry. In addition to the various designations of contact, there are five active profile designations typically used worldwide. They are classified as ZA, ZK, ZC, ZN, and ZI. The various profiles are a function of both design application and manufacturing. The tooth form in part defines the interaction between the teeth. It is generally accepted that one would not mix any of the ‘Z’ designates with any other.

ZA: Worm gear with straight-line (trapezoidal) tooth profile in axial section. The tooth sides are slightly convex in the normal section; the cross-section results in the spiral of Archimedes. The elements in the axial section are usually standardized (i.e. mx=m, ax=a). The gearing is produced using lathes or thread-cutting machines (the worm resembles a motion screw with trapezoidal threads). A tool shaped as the basic profile is applied onto the workpiece in the axial plane. With larger γ angles, different cutting angles occur in the forming tool on the lateral edges, which results in unequal cutting-edge loading and blunting. The lateral worm areas can only be sharpened using a special form grinding wheel. Therefore, spiral gearing is used in worms with a low pitch angle (γ<10°) in those cases when tooth sides are not treated thermally and do not require regrinding.

a) On the mean helix of space.

b) On the mean helix of tooth.

In the axial section, tooth sides are slightly convex and the cross-section results in a general evolvent curve (in an extended or shortened evolvent). The elements in the normal plane are standardized, (i.e. mn=m, an=a). The gearing is worked in case with one and in case and with two forming in the normal plane. The cutting angles are identical with great angles γ. Thermally treated sides can be ground using a grinding wheel with straight-line bevel areas on thread grinding machines. This grinding process results in non-straight-line lateral areas which, however, rather approximate the theoretical ones. If also the screw milling cutter used to produce worm gear toothing is subject to this grinding process, the worm and the worm gear create a theoretically proper pair. The common gearing is also suitable for worms with greater angles γ and for worms with thermally treated tooth sides that require regrinding.

ZI: Worm with an evolvent profile (a straight-line tooth profile in a plane tangential to the main cylinder). The tooth sides are convex in both the centerline and normal sections and the cross-section results in an evolvent. The elements in the normal plane are standardized (i.e. mn=m, an=a). The gearing is worked using two tools applied onto the workpiece. The tool cutting edge lies in the tangent direction toward the helix on the main cylinder. The evolvent gearing is used in worms with a higher number of teeth (e.g. z1 > 4); the worm resembles a cylindrical gear with helical teeth. Tooth sides can be ground with the flat side of the grinding wheel. Special grinding machines must be used given the relatively small angle γ.

ZK: Profile formed by a cone ground using a wheel and / or shank tool. 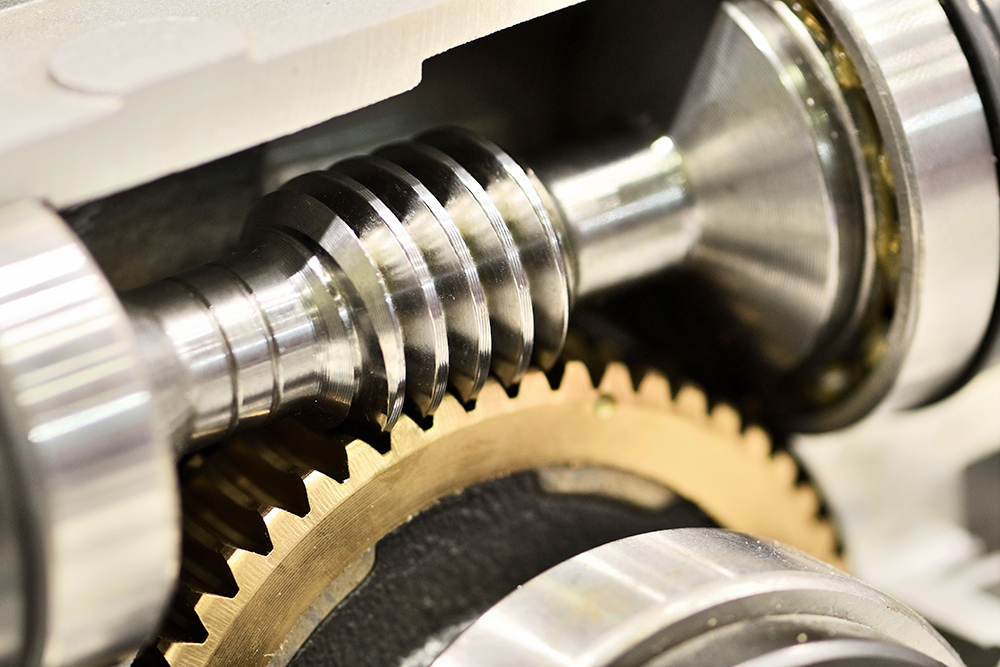 Worm gearing is most commonly used for high ratio reduction and increased precision positioning. Precision in position is gained by high ratio reduction. As the ratio increases, the output slows relative to the input, the reduction in backlash is similar to the ratio changes. Using worm and wheel designs, as an example, a simple drive with less than precise rotational position control will experience a significant increase in positional accuracy.

In terms of the working contact patch and service life, worm gearing does not share the contact parameters that parallel axis involute-based gearing does. Parallel axis gearing based on the involute tooth profile runs through a point during the engagement mesh where the two teeth exhibit no sliding, only rolling action. We define this contact point or rotational relationship as the pitch point. Worm gears have no point of pure rolling during their mesh engagement. Thus, all contact action is sliding. Interestingly enough, the predicted service life of a worm gear set is based largely on the wear rate as a function of the amount of material that can be sacrificed, the thickness of the tooth. Since predicted service life is based on wear rate and lubrication, and since the output wheel typically rotates slowly, traditional elastohydrodynamic lubricant development is difficult to develop or maintain. Thus, we usually rely on grease or a more adhesive lubricant and lubrication system to keep the gear teeth from touching. We also employ subtle geometric features of the tooth face, generally called a lubrication entry gap. The concept is to promote development of a wedge of lubricant to be drawn into the mesh. The geometric details of the entry gap are a function of the gear materials, lubrication, and interfacial speed.

Geometry also plays a role in the mesh efficiency. With the worm driving the wheel, the mesh efficiency is on the order of 60 percent to 80 percent. However, if the wheel drives the worm, the efficiency is generally less than 10 percent. From this, we tend to call worm and wheel gearing as non-backdrivable. It is not, but with these low efficiencies it is unlikely under typical circumstances that the wheel will effectively drive the worm. If, on the other hand, the gear mesh is exposed to an external vibration source, the wheel driving worm efficiency may climb as high as 40 percent, which invalidates the concept of non-back-drivability.

By way of references, I would like to thank William P. Crosher and Illes Dudas for the excellent materials and texts on the subject. As always, I would like to thank my friends at AGMA for all their support, guidance, and the knowledge they shared over the years. Finally, my mentor — and in my opinion the best source of practical knowledge and one of the most patient people I have come across in my quest to figure all this out — Miroslav Petele, Ing. 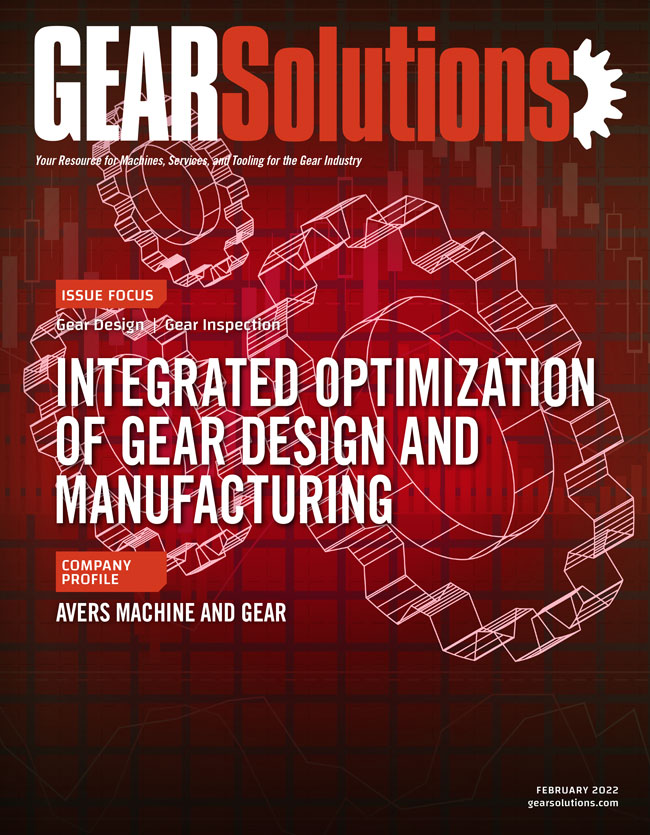