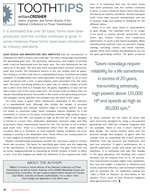 Gear design and manufacture was simplified with the introduction of hobbing more than a century and a half ago. The hob’s cutting edge represented the generating gear rack. The geometry, dimensions, and angles of involute teeth could be determined from the basic rack. The rack dimensions are the same as in the gear. The rack has three principal plane sections transverse, axial, and normal. The transverse section is the one usually used for gears. The tooling to cut this tooth form in a standardized series of pitches are readily available. A straight-sided rack cutter generates the gear teeth or, as is more usual, produced with a hob- or gear-shaped cutter generated from the basic rack. The basic rack being defined as a gear with an infinite number of teeth and a pitch circle that is a straight line. All gears, regardless of size, will run with a basic rack of the same tooth form. The actual tooth curvature does not require illustrating because the profile is the result of the generating process. The designer merely specifies the standard and the pitch of the cutter.

For many years a gear’s basic dimensions depended on the selection of a standardized rack. Although this limited the design, it provided interchangeability and reduced required range of tooling; factors that are not nearly so important today. Gears nowadays require reliability for a life sometimes in excess of 20 years, transmitting extremely high powers, above 100MW (135,000 HP), and speeds as high as 80,000 rpm. If the designer is limited to a basic form, addendum, dedendum, pressure angle, and fillet proportions, these requirements cannot be met. The involute is not a perfect gear tooth form. There is a detrimental effect from the small radius of curvature that is a limitation on load capacity. Sliding conditions are poor, leading to scoring in the dedendum area. These effects are compensated for to some degree by hardening the tooth surfaces.

Modern manufacturing techniques provide the necessary superior surface finish and accuracy. The basis for specifying gear teeth, and the beginning of the specification, is the geometrical description. The gear tooth form can be shown diagrammatically by assuming an infinite number of teeth, in effect a rack. From this diagram we obtain the definition of the required rack tooth form. It is estimated that over 30 basic forms have been produced, and this number continues to grow. In some instances these forms have been introduced as industry standards. Several spur-gear tooth forms have become standardized, and are in popular usage and applied in designing for the different duties.

There is a very clear trend to specialization of gear design. The standard rack is no longer to be found in several aircraft, automotive, wind power, gas turbine, marine, and compressor applications, to quote a few typical examples. Many manufacturing methods such as precision forging, casting, extruding, plastic and metal injection, powder metal, form cutting, and grinding do not use the gear generating method. The gears produced by these methods are the same as those that were previously designed by using a pre-selected generating rack. With the computer programs that are available, there is now a direct method of gear design. The current method varies from the previous design and analysis of gears with the involute form by separating the tooth’s geometry definition from the previous and traditional rack and tool selection. A gear’s performance for a specific application, power, and speed can now be optimized. It is estimated that with this change in the gear geometry, the bending and contact stresses can be reduced from 15 to 30 percent. This improvement provides higher load capabilties, less size and weight, a reduction in vibrations and sound, improved efficiency, and increased reliability with an extended life. For additional reading see “Take a PEEK at Polymer” by Rod Kleiss in the January, 2011, issue of Gear Solutions magazine [www.gearsolutions.com].