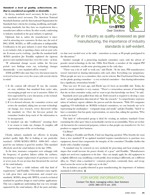 Standard: a level of quality, achievement, etc. that is considered acceptable or desirable.
In theory, standards aren’t necessary. In fact, in practice, standards aren’t necessary. The American National Standards Institute and the International Organization for Standards have criteria for creating, modifying, and implementing standards, but they have no requirement that a manufacturer adhere to them. In other words, conforming to industry standards in the gear industry is optional.

Optional, that is, unless the manufacturer is interested in attracting new customers. In that case, the seal of ISO, ANSI, AGMA, or API certification is indispensible. Certification in the gear industry is more than belonging to an exclusive club, or sporting a fancy seal on your website. It means you’re evolving—just like the standard itself. AGMA president Joe Franklin explained the rigorous process each standard must face every five years—at least.

“If substantial change occurs within the five-year period—new findings come out, technology changes dramatically—a new standard will be created.”
ANSI and ISO rules state that every document must be reviewed at least once every five years, with several criteria in mind:

1. Is the content still relevant? If not, the committee may withdraw that standard from active sales, encouraging people not to use it anymore. Either it’s been superseded by a new document, or the technology doesn’t exist anymore.
2. If it is deemed relevant, the committee reviews and revises the standard, taking into account technological change, new research, errors discovered within the standard, etc. Over the five-year period, the committee leaders keep track of the information to be incorporated.
3. A standard can also “reaffirmed,” meaning there is no reason to make any changes. It complies, still representing state-of-the art technology.

Clearly, industry standards are effective in keeping product quality high. But in looking at one particular standard—ANSI/AGMA/AWEA 6006-A03—what’s good for one industry is good for another. This standard effectively saved the wind industry in the late 1990s.

At the time, insurance companies were unhappy with the frequency of gearbox failures within the turbines, threatening to require replacement of gearboxes every six or seven years. It was an issue that threatened the survival of the wind industry.

“You can’t have a viable industry with that kind of requirement,” said Franklin. “The industries came together with great force and momentum and created new standards. AGMA, along with AWEA, created a technical standard for gearbox design in wind turbine applications. This was a significant undertaking that was very strongly supported by the wind industry. All of the parts and players that were needed were at the table—sometimes as many as 90 people participated in the discussions.”

“There was a lot of stuff to work out,” said Eberle. “At the time, PM manufacturers weren’t interested in sharing information with each other. Everything was ‘proprietary.’ When people are new to a committee, they can be reticent. But I had learned from being on the plastic gearing committee—a very technical committee—that sharing information has a significant, tremendous benefit.”

That was over 20 years ago, and Eberle says it’s been an incredible ride. Today, the powder metal committee is very mature. “There’s a tremendous amount of knowledge that sits on that committee today, and we want to get that knowledge out there,” he said.

Standards aren’t just pulled from thin air. Field research is required to develop a standard—actual application data instead of “blue sky research.” A comprehensive representation of industry experts validates the process and the document. “With 205 companies supplying 410 individuals on AGMA’s technical committees, we can honestly say we’re representing the marketplace—companies large and small,” said Joe Franklin. “And if we have a committee that has spotty representation, we assess that, asking the question, ‘Who needs to be here?’

This kind of well-rounded group is ideal for creating an industry standard: Cross-examining the other guys’ data is an invaluable exercise in accountability. These are technical documents for commercial purposes, written so that people can manufacture the best products to support their business.

In talking to Franklin and Eberle, I had one lingering question: Who benefits the most from a new standard? If an updated standard requires manufacturers to purchase new equipment, doesn’t that compromise the integrity of the committee? Franklin clarifies this doubt with a familiar example.

“A standard may be centered on new methods for processing and heat treating techniques that would increase the power density of a gear,” said Franklin. “Manufacturers might not need new equipment to do that—they can simply apply the old equipment in a slightly different way, modifying a tooth profile, heat treating it differently, use a different alloy, etc. That’s what a standard is—common procedure, commonly done, and recognized across the sector as the right way to do this.”

For an industry as quality-obsessed as gear manufacturing, the importance of industry standards is self-evident.