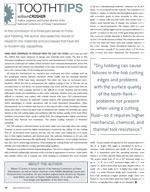 Hobs have continued to develop over the last 150 years, but it was not until the 1980s that major advances in design and materials were made. The first in this three-part installment covered the early history and development of hobs. In the second column we continued our outline of their evolution and continued development, and in this installment we will continue our exploration of the topic, focusing on the research that has led to the current state of hob tooling and processes.

All along the development arc, research has continued, and other coatings such as the purple-gray colored titanium aluminum nitride (TiAIN) and the blue-gray titanium carbonnitride (TiCN) have been developed. The latter two have an increased micro-hardness. When the hob is resharpened, the original coating is lost. A TiN hob can be recoated three or four times. An uneven buildup may occur, and the layers must then be removed. The other coatings referred to are difficult to recoat. Sintered and tin-coated high-speed steels are established as the cutter materials. Nodular irons are particularly difficult to machine, and cutters with carbide inserts that have CVD (chemical-vapor-deposition) are required. An alternate coating method, PVD (physical-vapor deposition), offers advantages in certain operations, with its lower deposition temperature. Other developments are in hobbers that dry-cut or near dry-cut with a mist, providing a cleaner, faster, and often a lower-cost gear than by traditional wet cutting. Dry hobbing can cause failures in the hob cutting edges and problems with the surface quality of the tooth flank; problems not present when using a cutting fluid. Dry cutting requires higher mechanical, chemical, and thermal tool resistance. The proper coating selection is therefore essential.

The TiN coating is selected based on its lower initial cost especially when wet cutting. However, it cannot resist the higher temperatures created by dry cutting. For dry coating PVD (Ti, Al) N-coated tools improve tool life over the lower cost coating by 2-2.5 times due to their higher hardness and thermal wear. The optimum thickness is 4-5 µm, and higher thicknesses decrease life significantly. The preponderance of wet cutting machines has also led to technology advances, reformulating the cutting fluids into environmental friendly and more-efficient cooling and lubricating qualities.

Shaping is a popular method of generating gears. The tool is shaped like a mating gear with a relieved cutting edge, whereas a hob is similar in appearance to a worm. Solid, wafer, and carbide cutters are in popular use. Gear shaping is considered the most versatile of all gear manufacturing methods. However, not all gear types can be produced by this method. This manufacturing limitation applies to internal and herringbone gears, gears with shoulders, gears in close proximity to other gears, gears or splines with very thin teeth, and certain racks. A seldom-used special type of shaper can produce worms known as thread generators. The shaper cutter is a gear with relieved cutting edges and an increased addendum to provide clearance in the root of the gear being generated. The maximum outside diameter is limited to the diameter at which the teeth become pointed. The minimum diameter is reached when the base circle and outside diameter of the cutter coincide. These theoretical extremes and the side clearance—usually 2º for coarse pitch, 1.5º for those with 24-pitch and finer—determine the theoretical face width. Shaper cutters are ground so the outside diameters are at an angle. This angle is calculated to produce a constant tooth thickness and depth of cut through its life. It is dependent upon the operating pressure angle between the cutter and the blank and the side clearances. The angles range from 4º on a 30º pressure angle and up to 7.5º-8º on a 14.5º pressure angle, with a 2º side clearance. Most coarse pitch spur gear shaper cutters are made with a face angle of 5º. A higher face angle would result in a lower pressure angle and, conversely, a lower face angle produces a higher pressure angle. Extra care, therefore, has to be taken when the cutter is sharpened so that the designated face angle is not changed.