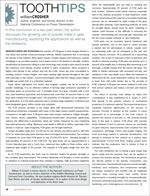 Manufacturers are increasing the number of P/M gears in their designs thanks to new alloys and powder metal processing methods. Market expansion lies in increasing the density of the material. When gears require complex shapes and tolerances, powder metallurgy is an excellent solution, but it leaves much to be desired in strength. Surface densification by transverse rolling is a new technology, and coining is also used to provide the maximum local density. Another method is warm compaction, which produces a higher total density in the surface and into the tooth. Gears are more susceptible to bending, surface contact fatigue, and wear, needing high density throughout the part and especially on the surface. Current technologies claim that the rolling contact fatigue strength can match that of a solid-steel material.

Super alloys, high-speed tool steels, and tungsten carbide can all be formed by powder metallurgy. It is an effective method of forming large production quantities of net-shape gears at economical cost. A portable power tool gear, complete with a lock slot, case hardened, quenched, and tempered was more than 50 percent lower in cost than when hobbed from wrought steel. The properties of P/M gears can be adjusted to the application. It is the least expensive way to produce large quantities of identical and interchangeable gears, within certain size restraints.

The P/M process provides a net shape gear with dimensional tolerances and mechanical properties compatible with many of the large volume market requirements. Compared to wrought steel, P/M gears have lower impact resistance, fatigue strength, and contact stress capabilities. Double-press/double-sinter processing significantly reduces the differential in properties, which are further enhanced by case hardening and external traverse rolling. Maximum case depth is difficult to define, especially if the density is reduced. Quite frequently, P/M gears are through hardened.

Tensile strengths range from 10,000 psi for low density, low-carbon steel to 180,000 lb/in² for nickel-steel alloy parts that have been hot forged and heat treated. The modulus of elasticity for most steel P/M gears is only 20,000,000 lb/in².  Bending strength is approximately 40 percent of the P/M/UTS. The gear limits can be approximated to a 12-inch diameter gear and a 1-inch face, maximum face widths of three inches, and a maximum gear weight of 35 pounds. The majority of P/M gears weigh less than five pounds.

As for P/M treatments, the teeth may be induction heated for greater strength, or the complete gear heat treated. The surface hardening of P/M gears is more sensitive to variations in material properties than castings or forgings. High porosities negatively affect the hardenability and can lead to cracking and corrosion. Approximately 60 percent of P/M parts are heat treated. Sintered nickel steels respond especially well to the ordinary processes of heat treatment. Under certain circumstances the need for a secondary hardening process can be eliminated by rapid cooling of the gear directly after sintering.
Case hardening methods, as used for wrought steels, should never be used. Cyaniding is seldom used because of the difficulty in removing the cyanide. Carbonitriding and, secondly, gas carburizing, are the two most popular methods of case hardening.

P/M parts can be annealed, quench hardened, and surface hardened. Due to the need to control porosity, a neutral and dry atmosphere is critical. Liquids such as carburizing salts can be entrapped in the part and cause internal corrosion. Oil is preferred as a quenching medium. This is due to improved control of distortion and results in minimal cracking. P/M parts can absorb up to 3 percent oil by weight and, if cleaning after quenching is not thorough, a health hazard from the fumes will arise. The ability to harden decreases with increased porosity, and variations in the case depth occur. When the hardness is determined by the usual indentation method, the reading is lower than with solid metals due to the porosity of P/M/ material. P/M parts are steam oxidized to both seal their porous surfaces and reduce corrosion and improve lubricity.

The effect of porosity must always be taken into consideration. It was established by A. Squire in 1947 that density is the primary criterion in mechanical properties of a sintered material. The torque transmission capability depends significantly on the amount of porosity. Porosity is defined as the number of pores expressed as a percentage of the total volume. In practice the inverse of porosity i.e., the sintered density level of the gear is stated. P/M alloys with porosity levels between 8 and 11 percent volume are unsuitable for gear reducers. Improvements have resulted from the compaction, shrinkage control, and powder forging. The most promising method is selective densification. Full density is achieved by this method on a surface layer approximately 0.003-0.004 thick. Rolling contact tests indicate that the endurance limit is similar to that of compacted steels.

The main limitations are in having a gear shape that ejects easily and the pressure that can be applied to produce the desired density. The mechanical properties are directly related to the density, composition, and microstructure. Heat treatment improves tensile strength, hardness, wear resistance, and compressive strength, but impact resistance and ductility may be negatively affected. Gear running tests have clearly shown improvements in bending strength by: increased density; increased sintering temperature; shot peening after case hardening; and a heterogeneous microstructure.