On the Kleiss Gears Web site you’ll find a statement not often encountered in the business world. In a brief history of the company it says of Rod Kleiss, its president, that “He founded Kleiss Gears in 1988 to produce the best polymer gear products in the world and advance the science of polymer gearing (and have fun doing it).”

Speaking with Kleiss, you find that this sentiment is genuine. “It’s really not about the money,” he says, speaking of the reasons why we work. “Money is important, and you can definitely have too little of it, but we get confused thinking that we need to be rich when we really need to be satisfied in our lives and excited about what we’re doing.”

In a career spanning back to the days when Bill Hewlett and Dave Packard still roamed the halls of their company, he has retained a sense of wonder about the beauty of the engineering principles behind the polymer gearing he designs and manufactures. His exposure to mechanical engineering occurred while he was in the Navy, where he first studied electronics before finding himself drawn to how things are constructed, and how they work. He eventually earned his degree in mechanical engineering at the University of Kansas, leading to his job in the design R&D department at HP. “We were working on precision instruments, and we’d invented an angle encoder that only cost about $200,” Kleiss says. “Bill Hewlett couldn’t believe that it actually worked when I showed it to him. I recall that he’d just come up with a new digital watch that was a computer. He was such a cool guy, and he taught me that you can do good work and enjoy yourself at the same time.”

One constant in his life—in addition to his wife, Georgianne, who he’d met and married prior to completing his studies in Kansas—is his love of the theater. After leaving HP, and working his way through a number of jobs, Kleiss had relocated to New York City where he’d spent a year studying acting at Circle in the Square Theatre School. Finding roles scarce, he took a position with Whirlpool working on reverse engineering a plastic gearset, and then at UFE, where he became the resident plastic gearing expert. While pondering whether he should seek employment or go out on his own, he was approached by a client who asked him to design the mesh pattern for a plastic gear. “I held my breath when I said I’d have to charge him $500,” Kleiss says, “but he agreed immediately.”

Planning to work as a design consultant, Kleiss soon realized that the real challenge was in making the gears rather than merely designing them, so he turned his attention to the tooling, and then he tackled the issue of shrinkage, and then inspection, and when he couldn’t get the consistency he needed by outsourcing the molding, he invested in a molding machine and spent a year learning how to use it. “During all this time I kept meeting customers who encouraged me to use my imagination and see what I could come up with. If I’d had half the luck with acting as I’ve had in business I’d be sipping Mai Tais on the beach with Tom Cruise right now,” he says with a laugh.

Rather than luck, it is the reputation Kleiss Gears has built over the years as the company to go to when others have failed that has resulted in a steady stream of new and challenging projects involving polymer gearing. Kleiss makes a point of surrounding himself with other engineers who are curious and stimulated by their work, and they are currently focusing their collective attention on emerging markets such as miniature and micro-miniature gears. “We’re working on an insulin pump with the tiniest motor,” he says. “It’s no bigger than the tip of your thumb, but it delivers seven pounds of thrust. That’s where we can go with polymer gearing.”

These days Kleiss is excited about the company’s prospects and pleasantly surprised to find himself acting again. “I’m spending every Monday evening studying with a professional acting group at the Guthrie Theater in Minneapolis, and I’m also the only male character in a play about Helen of Troy,” he says. “I’d always thought I had to choose between engineering and acting, and now I find myself doing both. It’s just amazing!” 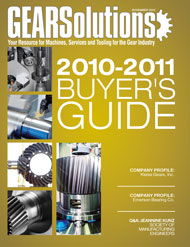