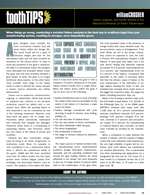 A gear designer must consider the most economical solution that will avoid failure within the design life. The usual result will be a gear of minimum weight and size for the anticipated loads and will have included an allowance for the service factor. In order to avoid any problems in the gear’s operation, the affect of unforeseen loads, the designer must anticipate the probable failure mode. The gear user will most probably interpret a gear failure as when the gear is no longer functional. Gear experts, on the other hand, must consider each stage of the failure mode in order to identify the cause, prevent a repeat, and/or ameliorate any further deterioration.

Failure can be subjective, predetermined, ongoing, or catastrophic. Gears that should be replaced may continue to run because production cannot be halted until a convenient time. When the pending failure is first observed it can be considered as one of the following situations: Reactive (only fixed when the gears can no longer run); Preventive (when periodically maintained with methods that mitigate the damage); Predictive (when there is a forewarning of impending failure); and Proactive (when the root cause of the failure is known and rectified).

Failures are also individually categorized as being in an initial, progressive, or destructive mode. Wear, for example, is only considered to be a destructive failure when it affects the operational ability of the gears. AGMA and ISO have classified more than 20 failure modes into five basic groups: wear; surface fatigue; plastic flow; breakage; and associated failures, such as cracks. The analysis of the failure will determine if it was from within the gear or from a sequence of events extraneous to the gear. Failure seldom results from a single factor. When the failure arises within the gear it can be from one of the following:

• Surface imperfections prior to cyclic stressing: The surface finish must be acceptable for the service it will endure or it becomes a major source for failure.
• Surface damage coincidental with cyclic stressing: A result of corrosion, wear, fretting, welding, etc.
• The size and class of residual stress.
• The size and manner of stress concentration.
• The stress distribution within the gear.
• The stress irregularities.
• The combination of stresses.
• The range of stresses induced by vibrations, overloads, etc.

The major sources of failures include material, manufacturing errors, heat-treatment problems, design, lubrication, maintenance, assembly, and the operating conditions that include the gear loading. Failures are rarely attributed to the design, but more frequently to any one of a large number of reasons attributed to the maintenance of the gear drive. The most prevalent cause is the presence of foreign bodies that cause abrasive wear. The second primary cause is misalignment. If the tooth flanks are not in the proper contact, they cannot be expected to carry the load. A Fortune 500 manufacturer analyzed 1,048 failures of open gear sets taken over a 25-year period, finding that defective material accounted for 9.6 percent, heat treatment for 15.2 percent, and manufacturing errors for 5.2 percent of the failures. Companies that specialize in the repair of enclosed drives find that the primary cause of failure is the poor maintenance of the lubrication or foreign objects entering the mesh. In fact, the standard joke amongst these repair shops is the bigger the inspection plate, the larger the debris, including wrenches, files, etc.

Water in the housing is another major problem that leads to gear failure. C.D. Schultz, of the Pittsburgh Gear Co., in his AGMA paper 99FTM12 analyzed their repair work with 2,188 units as 16.1 percent contaminated lubricant, insufficient lubricant 20.5 percent, bearings 9.61 percent, non-gear 9.01 percent, overload 17.4 percent, and precautionary repairs 27.2 percent. No manufacturing or material failures were recorded, as these must normally be rectified by the manufacturer.

When a comparison is made between the number of failures, and the number of fatigue cycles that each individual tooth experiences, the very high reliability of gears will be confirmed. Gear tooth failures are nonetheless not isolated phenomena. This is particularly true when developing new applications for a designated life that can be 100 hours for a lawn mower to a minimum service life of 20 years in an API drive, or 75 years on a dam gate hoist.