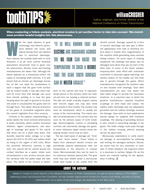 With the rapid advance in gear technology, new hitherto unforeseen failures can occur, and typical among them are failures due to electrical discharge. Such failures are scantily dealt with in most literature, if at all. Even current technical association documents tend to gloss over the phenomena. Electric motor and bearing manufacturers are aware that, although the failure appears as a mechanical effect, the cause is circulating shaft currents. It is well known that an electric arc discharge across the oil film can raise the temperature to such a degree that the gear tooth surface can be melted locally. It has also been realized for some time that damage can occur from electric welding in or near the gear housing when the path to ground is not properly made to circumscribe the gears and not through them. This rather obvious protection of the gears is somewhat neglected when the current originates from other sources.

Contrary to the publics’ understanding, in power plants the most common phenomena is static electricity, which creates increased vibration, higher temperatures, and damage to bearings and gears to the extent that there can be a plant shut down. One recently reported static voltage on a high speed (20,000 to 30,000) rpm turbine shaft as being in the region of 600 volts. When the potential difference reaches a high level, the current will be carried across the contact interface as a spark. Under such circumstances a very erosive process upon the surfaces that the spark leaps will take place. The extent of the erosion is dependent on the current and time of exposure. Small pieces of the surface metal are heated and torn out, leaving a cratered surface. The pits are small conically shaped craters with smooth edges and may also show microcracks in their vicinity. The surface may even be rehardened, which is usually the cause of the microcracking. The cracks usually run perpendicular to the surface and can even be the primary cause of tooth breakage. Electromagnetic current or circulating currents can extensively damage the gears. In some instances larger burned areas displaying temper colors may be seen.

The two main types of damage are “frosting” and “worm tracks.” These tracks or flutes from advanced electric erosion are periodically spaced depressions than run transversely to the direction of contact travel. Microscopically they can be seen to be numerous densely spaced pits. The gear teeth may also exhibit under a microscope small weld beads or arc marks from the electric current. Damage caused by a form of electric discharge can also give a different appearance from that of electrical erosion when it results from magnetization of the machine shaft generating stray currents during rotation. On some types of rotating equipment the bearings and gears can be damaged even when they are not part of the drive train. In some of the latest variable-frequency-drive units fitted with solid-state controllers to decrease signal switching, the electric pulses on the shafts can find their way to ground through the gears. Motor manufacturers recognized the problem early on and insulate both bearings. Gear drive manufacturers are also now aware but have taken longer to provide the necessary solutions. In a reported case in which the gearbox manufacturer required insulated couplings on both input and output, the turbine static discharge was not adequately grounded and the turbine bearings received the damage. Gear units on such applications should always be supplied with insulated couplings. The placing of grounding devices is also crucial to preventing damage to the gears. The static charge must pass through to the turbine housing without passing across the gear teeth.

Microscopic examination to verify electrical damage is accomplished by polishing and etching the damaged surfaces. Electric arc burns may be very excessive or localized. In either situation, the long-term effect is a decrease in surface fatigue life as the burns are material waiting for the appearance of pitting. 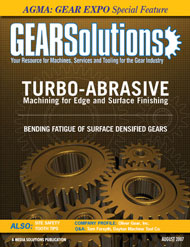