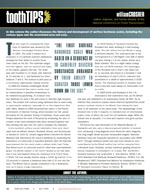 The first scale for comparing the hardness of materials was devised by the German mineralogist Friedrich Mohs in 1820. The scale is based on a sequence of 10 carefully selected substances arranged by their ability to scratch those lower down on the list. The materials ranged from the highest, such as diamond and topaz, to the lowest, gypsum and talc. The scale was later modified to 15 steps, with diamond at 15 and talc at 1, and hardened tool steel between 7 and 8. The method is still used as a non-precise approximate ranking method.

In 1865 the Russian metallurgist Dimitri Tschernoff learned that carbon steels must be heated above a specified temperature to be hardened by quenching. To measure relative hardness he used a file and colors to describe high temperatures. The scratch test method using hardened files is used today to approximate hardness, especially for on site inspections (Ref: SAE J-864). Martel in 1893 presented his report to the French Commission of Material Testing, which included the first useful procedure for the dynamic testing of hardness. Fours years later Foeppl advanced the work of Reaumur by measuring the area of contact of two semi-cylindrical bars when pressed together and then dividing this area into the load to evaluate the hardness.

In the twentieth century several indentation tests were developed such as Brinell, Vickers, Rockwell, Knoop, and Scleroscope. In Sweden in 1900 Dr. Johann August Brinell invented the Brinell Machine that determined the metal’s hardness by measuring the impression of a steel ball of specified diameter after the ball had been pressed into the metal under a defined static load. Today this Brinell score is commonly used for other than case-hardened gears. The Brinell number is the force F divided by the ball diameter D mm and depth H times the reciprocal of pi, F/D-H times 0.3183. The test usually involves using a 3,000 kg load for 10 to 15 seconds to impress a hardened steel ball of 10 mm into the steel. The Brinell test is usually considered to be a destructive test, as it leaves a large impression.

In 1916 Stanley P. Rockwell invented the Rockwell test while working in a ball bearing plant. The test differs from the Brinell in using a different indenter. The most-used type is diamond ground to a 120-degree cone with a spherical apex having a 0.2 mm radius, known as a Brale indenter. This is a slight radius change from the old ASTM standard. The advantages of the Rockwell test is that it only takes five to 10 seconds and leaves in a Rockwell C test an indentation of only 0.019 in. diameter and penetrates to a depth of approximately 0.0035 inches. The hardness number is instantly read from a dial and must always be stated with a letter prefix.

In 1925 Smith and Sandland in the U.K. developed a new indentation test, as the Brinell test was only satisfactory for hardnesses below 48 HRC. As an indenter they selected a square based diamond pyramid that would produce numbers similar to the Brinell, thus placing the hardness of all materials on the same scale. The disadvantage of the Rockwell test is that it required 15 standard and 15 intermediate scales, none of which can cover the full hardness range. While the Vickers test is accurate, it is slow and requires very good surface preparation.