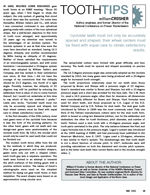 In 1900, Wilfred Lewis discussed gear tooth forms at an ASME meeting: “About 30 years ago, when I first began to study the subject, the only system of gearing that stood in much favor was the cycloidal. For some time thereafter, William Sellers and Co., with whom I was connected, continued to use cylindrical gearing made with cutters of the true cylindrical shape. But a well-known objection to this form of tooth soon emerged, and approximately 25 years ago my attention was turned to the advantages of an involute system. The involute systems in use at that time were the ones here described as standard, having 14.5 degrees obliquity, and another recommended by Willis having an obliquity of 15 degrees. Neither of these satisfied the requirements of an interchangeable system, and with some hesitation I recommended a 20-degree system which was adopted by William Sellers and Company, and has worked to their satisfaction ever since. At that time, I did not have the courage of my convictions that the obliquity should be 22.5 degrees, one fourth of a right angle. Possibly, however, the obliquity of 20 degrees may still be justified by reducing the addendum from a value of one to some fraction thereof, but I would not undertake at this time to say which of the two methods I prefer.” Lewis also wrote, “Cycloidal teeth must not only be accurately spaced and shaped, but their wheel centers must be fixed with equal care to obtain satisfactory results.”

In the first decades of the 20th century, most cast gears were of the cycloidal form because it was the form of the existing patterns. On the other hand, gears with cut teeth and new design-cast gears were predominately of the involute tooth form. By 1913, the circular pitch would only be used for cast teeth that could not be finished cut.

The modern tooth forms differ from the old by the methods in which they are produced. Prior to gear generators and modern shapers, gears were only cut with a shaped cutter; each tooth gap was a separate operation. The teeth were formed in an attempt to transmit the pitch surfaces of the mating gears with a positive uniform motion. The tables of Grant’s odontographs were used as the simplest method for laying out gear tooth forms or their templates. The exact shapes were based on an approximation using circular arcs.

The epicycloidal cutters were formed with great difficulty and less accuracy. The teeth must be spaced and shaped accurately on precise centers.

The 14.5-degree pressure angle was universally adopted as the involute standard by 1913, but many gears were being produced with a 20-degree angle for increased tooth strength.

The tooth proportions extensively used for cut teeth were those proposed by Brown and Sharpe with a pressure angle of 20 degrees; Grant’s standard was similar to Brown and Sharpes, but with a 15-degree pressure angle and a chart was provided for the face radii. The C.W. Hunt Co. used a 14.5 pressure angle: other than for clearance, all dimensions were considerably different for Brown and Sharpe. Hunt formulas were used for short teeth, and those proposed by C.H. Logue of the R.D. Nuttall Company and by E.R. Fellows for stub teeth. The stub gear tooth introduced by Fellows in 1899 was the most commonly used. Fully one third of the Fellows manufactures cutters were for the stub tooth form, which is based on using two diametral pitches, one for the addendum and dedendum; the other for tooth thickness, pitch diameter, and number of teeth. Fellows used a stub tooth with a 20-degree pressure angle, and tooth parts unrelated to the pitch. The only variance between the Hunt and Logue formulae was in the pressure angle. Logue’s system was introduced at the 1908 meeting of ASME, and had previously been published in the American Machinist, June 6, 1907. Logue used a 20-degree, otherwise it was similar to Hunt’s system. The disadvantage was that tooth depth is not a direct function of circular pitch. In 1927, textbooks were still providing calculations on both the diametral and circular pitch systems, and in the letter rack teeth have curved flanks and in the involute straight sides. 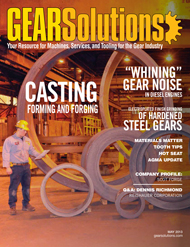