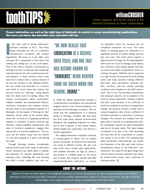 It has been said by Ernest Rabinowicz, professor emeritus at M.I.T., that three things terminate the life of a machine: obsolescence, accidents, and surface degradation. We know as in the latter case that gear life is dependent on the effect that rubbing and sliding has on the tooth flanks. Prior to the 1950s, research concentrated on learning how best to lubricate with empirically selected mineral oils and soap-thickened mineral greases. In these previous times many were led to believe that a copious amount of oil was the solution to any rubbing problem. We now realize that lubrication is a science unto itself. In recent times this science has become known as “tribology,” being derived from the Greek word for sliding, tribos. The science encompasses safety, environment, viability, reliability, and development. Physics, chemistry, mechanics and material science are just some of the disciplines required of a tribologist. On the subject of tribology Dr. Gert Saloman, former editor of the journal Wear, wrote that “It is the art of applying operational analysis to problems of great economic significance, namely reliability, maintenance, and wear of technical equipment, ranging from spacecraft to household appliances.” The science has the widest scope from the effects of a tire and roadway to a ship’s hull parting the water.

Through tribology studies considerable advancements have been made in lubrication theory. Research has taken place in evaluating lubricants for specific applications and reducing costs, extending life, and knowing the effect of heat, radiation, and cold, etc. In 1968 the British government initiated a comprehensive technological and educational program based on the recommendations of a specially formed tribology committee. The net result was the establishment of a National Center of Tribology, complete with test facilities that could study unusual environmental situations and organized programs for industrial R and D groups. In the United States, similar studies are undertaken, but without a central organization.

The original lubrication evaluation methods of running gears to failure has not always proved successful, as different test machines can result in different results. We also now have much more complex gear applications, with pitchline velocities as high as 180m/s and powers of 140MW, gears on the moon and in space. Not all gears operate with EHD (elastohydrodynamic) lubrication, so boundary lubrication where the surfaces are not completely separated can occur. The tooth flanks of meshing gears are subjected to a significant amount of relative sliding near the tips and roots.

This tooth action imparts a large amount of energy into the lubricating film which does not occur in bearings. Gear lubrication, therefore, must sustain greater mechanical stress and higher temperatures than in a bearing. The gears’ EHD film will be subjected to a high velocity of movement from the sliding action and heavy dynamic loading. Different gear types, sizes, geometries, materials, profiles, surfaces, and the varying operating conditions each requires its own EHD assessment. One to two micr-inch-thick temperature and pressure sensors can be applied to the tooth by vacuum deposition. Titanium material has been used because of its coefficient of electrical resistivity is sensitive to temperature change, the pressure sensor is made from a copper-manganese alloy whose coefficient of electrical resistivity is responsive to pressure changes. The sensors are isolated form the gear tooth’s metal by an underlying silica film. An oscillogram reveals the rapid temperature and rise in the gear mesh. This rapid change is believed to be due to the tooth absorbing the heat and not by convectional or conduction losses in the oil film. The resulting data when interpreted mathematically can predict the thickness of the film and tooth surface temperatures based on the lubricants’ characteristics. The basis for the gear design then can be based to provide optimum load capacity, lowest power losses, and a minimum of heat generation.