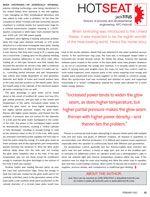 When ionitriding—or generically speaking, plasma nitriding technology—was being transferred to the United States from Germany in the mid eighties I was managing an R&D metallurgical laboratory and was asked to help solve a problem. At the time the company for which I worked sold twin horizontal vacuum chambers to ionitride ductile iron synchronizer rings for a manual transmission supplier requiring a >0.0005” epsilon compound or white layer. Each chamber had its own 1000 volt, 160 KW power supply.

Engineers were fighting a heating uniformity problem when the rings were stacked vertically on 120 posts attached to a solid steel rectangular base plate. Having spent several weeks in Germany learning the process, it was obvious that they were trying to fit a square peg into a round hole. Loading parts for the plasma nitriding process requires adherence to very strict rules when loading pit or bell type furnaces and that simple fact doomed the process for all but a few. With a minimum voltage required for nitriding of about 2.0 watts per sq. in., controlling partial pressure and part temperature was critical and totally dependent on part geometry, diameter and depth of holes and overall surface area of the load, and part position on the hearth plate. Since the hearth plate is the cathode of the electrical system all parts contacting it are as well.

The glow discharge or glow seam you’ve heard about is the result of rectified AC power (not true DC), gas partial pressure, and gas type in the vessel and temperature of the parts. Increased power tends to widen the glow seam, as does higher temperature, but higher partial pressure makes the glow seam thinner with higher power density—and therein lies the problem. If pressure was not correct for the diameter of a hole and the glow seam overlapped in the center of the hole, the power in the overlapped region would be dramatically increased, creating a “hollow cathode or hole discharge” resulting in enough energy to melt at the minimum steel on the ID of the hole. With (early arc potential controlled) power supplies the trick was to heat the parts using the energy of a wide glow seam at lower pressure and at the appropriate part temperature quickly increase the pressure to drive the glow seam without delay down into the hole and not overlap the glow seam anywhere else in the load. If the part temperature was too low there would be insufficient energy to maintain the glow discharge to the bottom of the hole if that was needed.

Another matter was loading like-size parts, as was the case with synchronizer rings. Since the energy to heat the load was created by the glow seam and if not carefully controlled, parts in the geometric center of the base plate could overheat while parts positioned on the outside diameter of a circular base plate would lose heat to the anode radiation shield that was attached to the water jacketed vacuum vessel. In the synchronizer ring case, the load was a rectangular shape within a horizontal but circular vacuum vessel. No matter the shape, however, the spacing between parts located in the center of the base plate must have greater clearance so as not to concentrate the energy and overheat. It is actually easier to process parts of varying sizes and weights since the mass for heat loss control could be more easily balanced; more massive parts in the center requiring more energy and smaller parts positioned more closely together on the outside to conserve energy. When the synchronizer load was reoriented and stacked on posts and supported horizontally in a “doughnut” configuration, leaving the center open allowed for a much better energy balance.
Picture a commercial heat treater attempting to plasma nitride parts with multiple hole and slot sizes and gears of different modules, all stacked in quantities to accommodate cost effective production. It is difficult and requires much experience especially when the operator is continuously faced with different part geometries.

For temperature control, generally just two thermocouples were inserted into parts near the part surface: a heavy or large part, and one in the smallest part. In Germany, for additional control, an operator would use a photographer’s cape to block out ambient light and observe temperature variation within the load. If the variation was too large he must stop heating and allow the entire load to equalize, and only then could heating continue. Next month I’ll discuss the evolution of power supplies, process details, and comparisons to traditional gas nitriding.