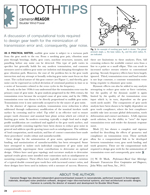 As a practical matter, audible gear noise is subject to a tortuous path from the gear mesh to the ear. From a meshing gear pair, vibration must pass through bearings, shafts, gear cases, machine structures, mounts, and panelling before any noise can be detected. This type of path varies in specifics but generally holds for any modern transmission, and common measures used to address gear noise are isolation and damping throughout the gear vibration path. However, the root of the problem lies in the gear tooth interaction and any attempt at broadly reducing gear noise must focus on that cause. The cyclical nature of this gear contact (see Figure 1), and thereby, gear noise can be expressed as cyclical deviation of rotational position in time or as a series of harmonics related to the error cycles in the frequency.

In the absence of rigorous analysis, transmission error reduction is often addressed through rudimentary modification of the nominal involute tooth surface by crowning and/or relief. Tip relief is an effective tool to ensure proper tooth clearance and nominal base plane action which are critical to limiting gear noise. In modern crowning, typically a single lead and a single profile modification are combined and applied to the gear tooth surface, and axial and proﬁle crowning together have been shown to reduce gear noise in general and address specific gearing issues such as misalignment. The addition of load computation, mesh analysis, and line of contact constraints have made these procedures’ results robust and manufacturable.

Gear design for the minimization of gear noise, optimization of gear loading, and maximization of manufacturability has been attempted. Some have attempted to isolate each individual component of gear noise and computationally superimpose these contributions to determine an optimal design.  Others have used gear topology and curvature analysis to determine optimal results given some installed state constraints such as misalignment or mounting compliance. These efforts have typically resulted in some variation of a typical double crowned gear tooth face with increased contact ratios, and these designs have been used in industry with a measure of success. However, there are limitations to these analyses. First, full crowning reduces the available contact area from a line to a point or a small ellipse. This can result in increased surface stresses relative to conventional gearing.  Second, frequency effects have been largely ignored.  Third, transmission error and load transfer is not kept constant; a constant transmission error being requisite to eliminate gear noise.

Dynamic effects can also be added to any analysis attempting to reduce gear noise or force variation, but the quality of the dynamic model is again limited by the quality of the transmission error input which is, in turn, dependent on the gear tooth mesh model.  The components of gear mesh analysis have been shown to be highly dependent on gear tooth compliance, where the best compliance models take into account global deformation, tooth deformation and contact mechanics.  A full, rigorous mesh solution, has the ability to “zero” the input transmission error and render the dynamic response moot.

Heat treaters of old were onto something heating and cooling in steps to reduce distortion. But salt processing may save the day!