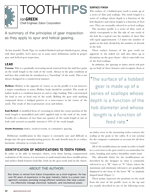 In last month’s Tooth Tips, we studied finished and pre-finished gears, along with their profiles. Let’s move on to some more definitions useful in proper spur and helical gear inspection.

Crown: This is a gradually increasing metal removal from the mid face point on the tooth length to the ends of the tooth. Always in the plus condition at mid face this could also be visualized as a “barreling” of the tooth. This is not always designed in a symmetrical manner.

Hollow: Hollow is the opposite of crown, as on the profile it is not however a major contributor to noise. Hollow leads should be avoided. The result of hollow leads is a condition known as end or edge loading. This concentrated the load at one or both end of the tooth. Rolling the gear with marking compound shows a bridged pattern or a non-contact in the center of the tooth. The result of this is premature wear and failure.

Deliberate modification in this respect is extremely rare and difficult to design into the gear manufacturing process. Its only benefit may be to reduce harmonic vibration in certain drives.

Identification of Modifications to Tooth Forms

In order to be able to interpret charts, even those having computerized evaluation of the traces, it is necessary to understand what these modifications and surface finish features look like, both on the gear tooth and on the charts.

These surface features of the gear tooth are apparent to the naked eye and also show up as deviations on the gear charts—this is especially true of the feed scallops.

In addition, the spacing or index check will pick up on both of these features and recognize them as an index error as the measuring stylus contacts the scallop at the peak or the valley. It is not normal for the computer evaluation to account for all these “errors”.

All of the modifications are made in order to build in a correction to the gear tooth to accommodate for noise, bending and surface durability under load.

The allowable limits for the modifications are described by the designer in what is commonly referred to as a “K” chart or “V “chart, where the maximum and minimum tolerances are graphically displayed in the form of the letter “K” or similarly shaped band (Figure 1).

These points represent the positions on the tooth from the start of the profile (root) to the tip and are usually described in one of the following terms of “angle of roll” or “length of roll” or actual gear diameter or radius. The average tooth trace must fall entirely within the band.

In addition to the K band there must also be qualifying notes, e.g.:

Along with the chart in Figure 2 there must be two other requirements called out.

Variation: This is the straight line between the High point of single tooth contact (HCP) and the SAP. This is generally described with a v chart

Range: This is the allowable amount of variation between the actual profiles. This is generally given as a numeric value.