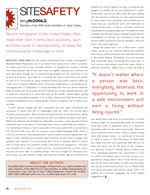 When you think about it, this country has always been a land of immigrants. Besides Native Americans, all of our family trees have roots in other countries. In recent years we’ve seen growing numbers of foreign-born workers entering the United States, and if they have done so legally, entering our workforce as well. And even though we in manufacturing depend on the expertise of our seasoned veterans, who help us to achieve the level of precision and quality we aim for in our products, every industrial facility has what could be called an “entry level” position. Whether that’s deburring, degreasing, or polishing parts, packaging them for shipment, or simply handling chip removal, these positions allow workers who need a job but lack experience to get started learning, and to have the opportunity to work their way up the ladder toward higher-paying and more-responsible positions. This is often where you’ll find those who have recently immigrated to the United States without a specific set of skills to be working.
It goes without saying that the companies who hire these individuals will encounter a whole new set of challenges, and the chief one among them involves communication. When workers doing their jobs on the shop floor, which is often a loud place, can’t communicate with one another, problems can arise. While this obstacle will probably be eliminated over time—since people in these situations have a tendency to eventually learn how to speak with one another—it’s something to keep in mind, especially in the early days of the new person’s job. And even with those who do possess some English-language skills, there is still a lot of room for miscommunication, which results in mixed signals and confusion. In the industrial environment, that situation can also lead to danger, and perhaps even injuries. I’m only pointing this out as a reminder that it’s a good idea to think about the positions these newcomers are assigned to, because you probably don’t want it to require precise communication as a means of getting the job done right or avoiding danger. And even though it’s basically common sense, you also need to make sure that every single sign in your facility is printed not only in English, but also in whatever languages will enable all of your employees to understand them. Just as you don’t want the men walking into the women’s restroom, you also want everyone to know where they should be extra-careful due to floors that are sometimes slick with lubricants or metalworking fluids, or where overhead cranes are operating and swinging large parts through the area. Eyewash and first-aid station signage should also be multilingual, as should any reminders to wear the proper safety equipment such as earplugs, steel-toe boots, and safety glasses.
Along the same lines, but a little more complicated, would be the cultural differences between their home country and what we’re familiar with here in the Unites States. Remember, you can’t assume that everybody does everything the same way, or that certain expressions mean the same thing in different countries. Safety may not play as large a role where they come from as it does here, so these workers might not automatically reach for a hardhat when they enter a dangerous area, or a respirator when they walk into the paint spray booth. There are even instances where some cultures equate taking risks with being “manly,” so you’ve got to be sure to instill a sense of the importance of doing their job safely from the very beginning. And not just for their own good, but for the good of the company, too. Because it doesn’t matter where a person was born, everybody deserves the opportunity to work in a safe environment and to be able to earn a living without being injured. But if that should occur, you will be held responsible for that person’s injury just as you would anyone else’s.
Go to OSHA’s Web site [www.osha.gov] and search using “ESL”—for English as a Second Language—for more helpful suggestions.