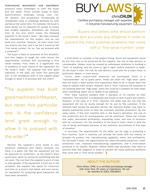 Purchasing machinery and equipment presents many challenges to both the buyer and the seller. These include scope of work, specifications, drawings, timing, cost, run-off, delivery, and acceptance. Occasionally an unexpected issue or challenge develops for both parties at the same time. For example, the buyer’s team sends out its requests for quotes to known and reliable suppliers. Quotations are received from all but one, which poses the following question to the buyer’s team: “We have reviewed the requirements for this project, and we can build your machine. However, we have never built one exactly like this, and if we did it would be the ‘first serial number’ for us. Can we proceed with a proposal?”
The buyer’s team is surprised at this situation, and then begins to weigh the risks versus the opportunities involved with purchasing a first serial number. First, there is a significant risk of problems or even failure of the equipment for the buyer’s team. The supplier has built good machines in the past, but never this particular one. Is the confidence level in this supplier great enough to allow it to proceed with the order?
Second, the supplier’s price quote is very attractive compared with others received, but there is a great risk that the equipment will not be approved for production, so the buyer’s team would have spent its money for something that did not work. The risk from the supplier’s point of view is even greater. If the equipment is built but is not accepted, the supplier has spent its resources and time on a project that failed, and even worse, its reputation for producing good equipment will have been tarnished.
A third factor to consider is the project timing. Since this equipment would be the first ever to be produced by the supplier, the risk of late delivery is considerable. Delays could be caused by unforeseen problems in building a “first” of anything, and the need to “get it right” before shipment is made. On the buyer’s side, the risk for late delivery could also be a major issue in production delays, or even worse.
Fourth, when custom-built machines are purchased, there is a “recommended” list of spare parts. These are often the “high wear” parts that the buyer’s team knows from experience need to be in house when the need to replace them arises. However, with a “first” machine the potential of not knowing what the “high wear” parts are could be a problem for both sides when something wears out or needs to be replaced.
Fifth, many machine builders offer a warranty of 12 months on their machines. This practice is widespread and known to both buyers and sellers. However, in the case of a “first” machine, the seller has the risk that the equipment will not be sturdy enough for its use by the customer. If the machine fails during the warranty period, the machine builder may have to absorb substantial costs to help the customer maintain production. By the same token, if this first machine fails in the buyer’s operation, the risk of lost production and its consequences can be enormous. These can include lost sales, decreased profitability, expediting costs, and loss of business with its customers. For the members of the buyer’s team, there is also the risk of being terminated because of the problems encountered in this type of situation.
In summary, the opportunities for the seller can be huge in producing a first machine. Such a machine can provide the seller with the chance to broaden its product line, manufacturing capability, sales, and profitability. For the buyer’s team, the opportunities can mean increased production, lower production cost, improved manufacturing capabilities, and a more-robust presence in its market. However, before either side proceeds, they need to perform their due diligence in order to prevent the many potential problems that come with a “first serial number.”

Estimates say more than 30 basic forms have been produced, and...