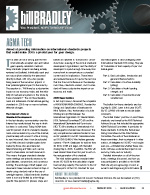 This year can be a turning point for the internationally accepted spur and helical gear capacity calculation methods. Many standards projects are being actively reviewed and balloted. Individually, each project may only be noticed by the personnel directly involved, with only a few people being aware of the numerous projects or their potential global impact to the industry. The question is; "Will there be a substantive impact on our economy, trade, and the reliability of mechanical systems in the future by these standards?" The continual development and refinement of international gearing standards in 2005 may or may not achieve effective changes.

The Internet's Role in Standards Development
In the last decade, communication over the Internet has revolutionized the way in which business is conducted. Today, AGMA does over 90 percent of all its standards development communications by use of the Internet, predominately with e-mail. If a file is too big to send via e-mail, then it can be uploaded to our Web site and multiple copies downloaded by those who are interested. Teleconferencing and Web casts can be used to share ideas and edit documents. This means that gear standards development meetings are primarily necessary for good debates, compromise, and consensus building. The exchange of draft papers and documents takes minutes instead of days or weeks using standard mail or the use of overnight express. Global standards development is now only limited by a few things: specific time periods for process steps and ballots as specified in "due process" procedural rules; queuing of the work at standards development organizations; and the ability of developers to spend enough time away from normal work to concentrate on a standard content and its implications. These items are reviewed because it may be the last one that has the most influence on the development time, standards content, and if a standard will have a substantive impact on our economy and trade.

2005 Opportunities
In last July's issue, I discussed the completion of ANSI/AGMA/AWEA 6006-A03, Standard for Design and Specification of Gearboxes for Wind Turbines. Also, the formation of a Joint Working Group (JWG) between the International Organization for Standardization (ISO), Technical Committee (TC) 60 and the International Electrotechnical Commission (IEC) TC 88 to develop an international wind turbine gearbox standard was discussed. This very comprehensive national standard is now out for parallel ISO and IEC international vote as ISO/DIS 81400-4, Wind turbine generator systems — Part 4: Gearboxes for turbines from 40 kW to 2 MW and larger, with the ballot closing May 1, 2005. In addition, the JWG will meet at least three times this year to work on the next generation of this standard.

The ballots for these standards are closing May 9, 2005. Later in this year ISO/TC 60/SC 2/WG6 will meet to resolve ballot comments.

The United States' positions on all of these standards are formed by the ANSI Technical Advisory Groups that included the appropriate AGMA Technical Committee. In particular, for these standards it will be the Helical Gear Rating Committee and the Wind Turbine Committee. The work of the individuals on these committees, their counterparts in other nations, of delegates to ISO/IEC–and maybe even you–will determine whether these standards will have a substantive impact on our economy, trade, and our industry.

Detailed information on all of the standards, meetings discussed, and how you may participate is provided on the AGMA Web site at [www.agma.org], or send an e-mail to tech@agma.org for information.