Some gear manufacturing companies have built their reputation over the course of many generations, but this one has done so in little more than two decades.

In a perfect pairing of academic training and hands-on experience, two men came together 22 years ago and launched a company called American Gear & Engineering, Inc., in Westland, Michigan. “I had worked my way through school as a mechanic at a trucking company, and after I’d earned my degree in economics from Albion College I took a job as a process engineer at Michigan Gear & Engineering, which was a very old gear shop that had been founded in the late 1800s in downtown Detroit,” says Jeff Emerson. “My boss there was a man by the name of Louis Cingolani, who had worked his way up through the ranks to become shop foreman. He knew how to run the machines, and I knew how to do the math, so we were a very good complement to each other.”

So good, in fact, that they decided to leave the company — which was undergoing a certain amount of upheaval — to go out on their own. They identified a couple of silent partners and leased a 3,300 square-foot shop, where they were the company’s sole employees for three years before they hired their first helper. Five years later they outgrew their original space and moved two doors down in the same industrial park in which they are still located. That building provided much-needed additional space, for a total of 13,000 square feet, and the partners soon made a significant expansion, with the current footprint covering some 27,000 square feet. The number of employees has grown as well, with 48 people now engaged in conducting the company’s various activities.

From the very beginning, however, they were able to rely on their reputation and contacts to land a worldwide blanket maintenance contract with Chrysler, and they worked night and day to live up to the trust that had been placed in them, while also constantly seeking out new business. “If somebody called me at 2:00 in the morning I’d run out, pick up a sample, and we’d reverse engineer the parts to get them up and running again,” Emerson recalls. “And that’s still what we’re known for. In the early days, when it was just me and Louie, we made everything ourselves, and our regular workweek was from 6:00 in the morning until midnight six days a week, and then we’d come and put in another seven or eight hours on Sunday.”

Their hard work paid off, with new accounts being set up constantly, including a worldwide maintenance contract with Ford in 1989 — just four years after the company had been founded, in 1985. As revenue increased, the partners folded the money back into the company, expanding its capabilities to the point that virtually anything anyone needed could be handled by American Gear. “I don’t think there’s anybody in Michigan who can duplicate everything we do under one roof,” Emerson says. “We turn, broach, slot, ID grind, OD grind, do two-, three- and four-axis milling, and cut more different types of gears than anyone else. We produce the largest bevel gears in the state — we have an 80-inch VTL, and I’ve got a couple of machines that can hob up to 100 inches in diameter. We also spray ceramic coatings and MIG spray-weld metal, so we’re quite diversified in terms of the services we offer.”

The company is also diversified in terms of its customer base, currently shipping its products into 40 states in the U.S., and in addition to its automotive work has begun branching out into markets including components for gearbox reduction and even mining applications. What it’s best known for, though, is being able to tackle projects that other gear manufacturers have turned down.

“We just completed a job for a company in Kona, Hawaii, that has developed a machine for turning algae into food,” Emerson says with a laugh. “They had sent a gear sample to six different companies in the continental United States, and nobody could figure out how to make it. Someone finally told them to send it to me, so we made the gears and they’re thrilled to death.”

As the president and sole owner of American Gear & Engineering—the two bought out their silent partners a decade ago, and then Emerson purchased Cingolani’s shares about five years later when he was 80 years old, and just three years prior to his death in 2005—Emerson takes pride in carrying the company’s original philosophy forward.

“When Louie and I started this company our goal was to build a reputation for quality, service, and fair pricing,” he says, “and I’m proud to say that he was able to see that happen within his lifetime. And I take building on that legacy very seriously—I’m extremely loyal, and I get things done. And if you’re a steady customer of mine, it doesn’t matter if it’s Thanksgiving Day, Christmas Eve, or the middle of the night, if you need me, I’ll take care of you. Because I’m in this for the long haul.” 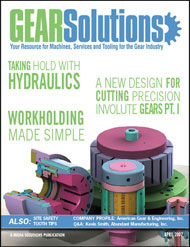