Long story short: the company dramatically improved the material removal rate and yield while reducing fixture cost and delivery lead time on a family of gears by not treating them as gears.  First, they moved the tooth forming operation from a traditional gear shaper to a CNC multi-tasking center.  Next, they treated the tooth throat as a short slot rather than the usual tooth throat, using a form-matched Ingersoll Chip-Surfer replaceable-tip carbide slotting tool.

Step one enabled “done-in-one” machining, which led to simpler in-process parts handling and shorter delivery lead times as well as reduced total machining cycle time by more than 2 to 1.  Step two streamlined the tooth-cutting operation itself, the longest operation on the part, by about 3 to 1.

Running 24/6 with 60 employees in the shop, the company has earned a reputation as, in the words of CEO Pam Rubenstein, “the ‘go-to’ guys for challenging manufacturing projects.”  Because of its location and that reputation, ASPI has become a preferred supplier for aerospace manufacturers.

“When you see a gear, you naturally think of a stroker-type gear shaper, equipped with the familiar single point high speed steel form tool,” says Todd Stoddard, ASPI manufacturing engineer. “But completing this particular part is more about machining the web, hub and stepped shaft bore –seven operations in all — than just cutting the teeth.  Now we grab the part once and complete all seven.”

Moving to “Done-in-one”
The sector gear, machined from solid 17-4PH bar stock, looks like half a gear with a lever arm attached.   Measuring about 3 ½ inches diameter with 46 teeth over a 180o arc, the gear goes into helicopter flight controls. Annual volume for the earliest orders was just 100 pieces, all similar.

Back in 2008, ASPI moved strongly toward the “done-in-one” approach on a plant-wide basis.  To that end, the company moved the job to a new Mazak Integrex CNC multi-tasking center with all available auxiliary axes.  “In effect it’s a 9 axis machine,” says Stoddard.

Originally on the new Integrex, teeth were formed with a 2-inch high speed steel (HSS) gear gasher – essentially a slitter with form-matched teeth.  It completed the teeth in two roughing and one finishing pass.  Total cycle time for tooth machining was 28 minutes, the same as before on the shaper.  The big savings were in the other operations and in less part handling.

Orders for the sector gears started to increase in 2011, and expanded into a family of about a dozen different part numbers.  Total annual volume grew to around 500 pc.  The parts varied in diameter, arc, number of teeth and extra features like linkage arms, but used just two different tooth forms.  In other words, the job became a big enough piece of business to warrant some additional optimizing.  Tooth formation, the most time consuming of the seven operations, naturally became a prime target.

Stoddard reached out immediately to Ingersoll’s Andy Thornburg who, in Stoddard’s words, “knew more about gear machining than I did — especially non-traditional gear machining.  It’s a pretty specialized area.”

Teeth as Slots
Thornburg suggested treating the teeth as short slots and machining them with a 1 inch form-matched Chip-Surfer T slotting mill oriented like a slitting tool. The cutter features a small replaceable tungsten carbide tip mounted on a threaded carbide shank.

By itself, moving from HSS to carbide would enable much higher machining rates and extend edge life, Thornburg reasoned.  The replaceable tip design, moreover, would minimize the amount of carbide used and enable in-spindle tip replacement.  The carbide shank, which was reusable, would stiffen the cutting system for a better finish on the wear surfaces of the teeth.

Faster Machining, Big Tooling Inventory Saving
During trials, Stoddard and Thornburg worked together to optimize parameters for the new process.  Conclusion was to quadruple the surface speed and double the feed rate, and to take just one roughing and one finishing pass.  Final settings for the 1 inch tool are 1500 RPM, 0.060 in. depth of cut for roughing and 0.010 in. for finishing.  This process change reduced cycle time for the teeth from 28 minutes to eleven.

Once the new process went operational for a couple of months, tool life could be compared.  The Chip-Surfer tips typically last through 50 pieces in this application, while the gear gasher needed a regrind every 10-20 pc.  “So ASPI reduces stoppages for tool replacement and cuts tool inventory costs as well,” says Thornburg.

Even though it is form matched, the Chip-Surfer tip costs about $125 apiece, the same as one regrind on the gasher.  Keeping spares is much more economical too since a single gasher can cost more than $400 and $100 a pop to regrind, and can take weeks for delivery.  Bottom line: tooling cost per part dropped from $20 to $2.56, an 8 to 1 reduction

Slotting Tool, Close Up
The improvement in throughput stems from the proven capability of carbide over HSS, plus the Chip-Surfer’s free-cutting presentation geometry that enables higher feeds and speeds without chatter, according to Ingersoll’s Andy Thornburg.  The Ingersoll Chip-Surfer mill features a replaceable carbide chip that screws onto a threaded shaft with 0.0002” repeatability to datum.  Tips can be swapped out right in the spindle.  The shaft can be either alloy steel or carbide depending on stiffness requirements and impact loads.  “Even with the carbide shaft, the only throwaway carbide is the tip,” explains Andy Thornburg.  Ingersoll custom-grinds a standard Chip-Surfer T-Slot tip to match ASPI’s required form.

Modified Standards: Job-Matched Yet Readily Available
What about the supply-chain risks of depending on a “special” tool?  “Virtually all gear tooling is a special anyway,” says Todd Stoddard.  “The lead time on the previous slitter was weeks or months.  And here, the customization is so simple that we regard it as a modified standard tool, not a full special.  We can get them in a couple of days.”

ICI Tooling Wins Gearmakers’ Trust
The ASPI application typifies a global trend toward indexable carbide (ICI) tooling in gearmaking, according to Frank Berardi, Ingersoll product manager for gear machining.  “Gearmakers have always recognized the potential of ICI tooling to outproduce and outlast high speed steel by wide margins, but were deterred by concerns about repeatability in multi-tooth compound cutters and hobbers,” he says.  “Today’s ICI gear tooling, with precision machined insert pockets, delivers the repeatability — even after replacement — to meet of even high precision gears.”

In one recent case here in the US, an Ingersoll one-start indexable carbide insert (ICI) hobber has reduced “from the round” tooth-generation cycle time from 34 hours to 5 on big 8 AGMA shaft gears for mining equipment — while actually improving  surface finish.   Now the surface reads 80 RMS all the way to the root, vs. 135 RMS partway down before.   The company, a familiar name in off-road equipment, has also standardized on Ingersoll ICI hobbers for a host of whip gears, where surface quality is more critical. 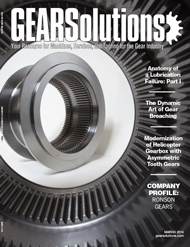